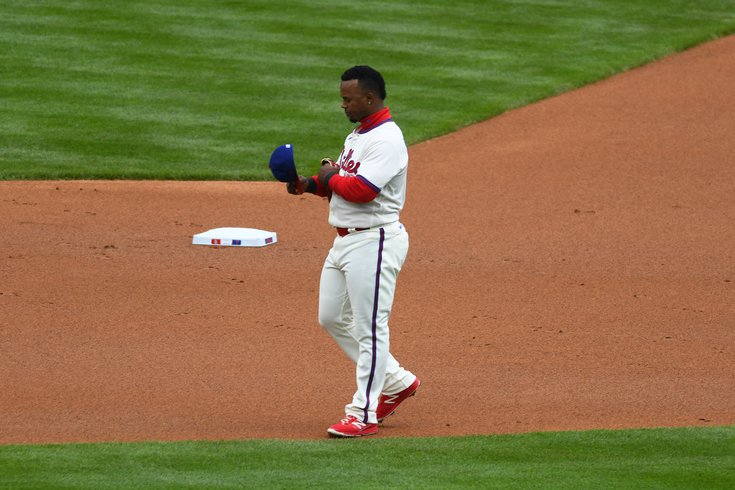 PHILADELPHIA, PA - APRIL 17: Jean Segura #2 of the Philadelphia Phillies takes off his hat during the game against the St. Louis Cardinals on April 17, 2021 at Citizens Bank Park in Philadelphia.

After a decade of Phillies teams underperforming, there is probably an even mix of fans in the glass half empty, and glass half full categories.

The Phillies are currently 10-10, good for the best record in a very jam-packed NL East but as can obviously be seen, this has been a flawed baseball team so far in 2021.

For every positive — like Bryce Harper and Rhys Hoskins mashing the baseball, or the top of the Phillies rotation pitching well there are negatives — like the centerfield spot offering almost zero production and the bullpen being shaky, if not a better than a year ago.

However there is one setback the team is dealing with that really falls under the category of bad luck, and that is injuries. There are currently seven Phillies players on the injured list, if you include Seranthony Dominguez, and it's forced Philadelphia to confront it's depth issues head on earlier than many would have wanted. Here's a look at the current players sidelined:

The dates above are the earliest possible return, which does not come as a guarantee. The good news is the team could be getting some guys back over the next dew days.

Of the players on the list, Alvarado may be the first one back, according to manager Joe Girardi. Matt Moore may take a little longer.

“We’ve got to see probably a little bit more of where he’s at than Alvarado because he’s a guy that’s expected to give you distance,” Girardi said.

Moore hasn't been very good, but the Phillies don't appear to have a surefire replacement, as Vince Velasquez took his rotation slot and didn't exactly run away with it. Judging from Girardi's words just above, it sounds as though the team may elect to give him a few more chances to start when he is back.

The absence of Jean Segura (who was hitting .333 before sustaining a leg injury and will hopefully be healthy next week) led to Miller starting — and Miller went 5-for-10 with a three-run homer starting at second before he went down with a stiff neck. That opened the door for Nick Maton, who has been red hot himself, hitting .438 with seven hits in 16 at bats over four games.

The Phils could have some tough decisions to make when their infielders return.

However, they'll be delighted to welcome Alvarado and Bradley back to the bullpen, should they get healthy soon as well.