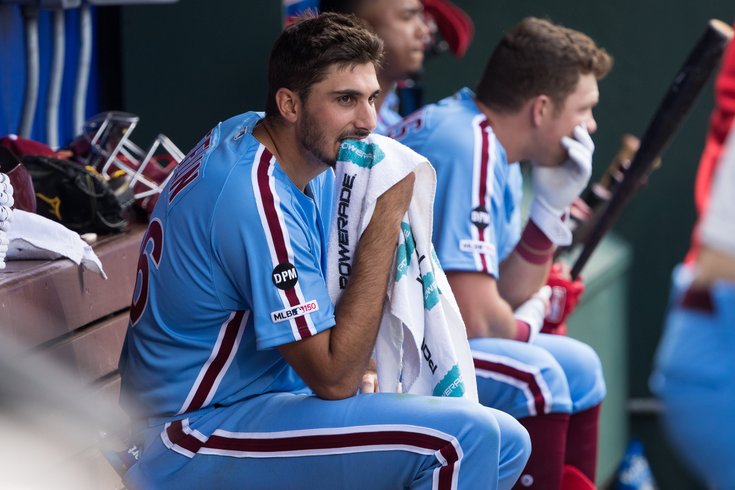 Late Friday afternoon, the Phillies announced that starter Zach Eflin would be put on the 10-day injured list with back soreness, marking the end of a week that has seen several of the team's pitchers hurting. To replace Eflin, the Phillies recalled lefty Cole Irvin, who went 2-1 with a 5.60 ERA in three starts before being sent down to the minors last week.

Eflin, who has been the Phillies' best starter this season (5-5 with a 3.02 ERA in 11 starts) joins relievers Pat Neshek, Adam Morgan and Victor Arano on the injured list this week, a list that already included David Robertson, Edubray Ramos and Tommy Hunter.

In other words, the Phillies bullpen is in shambles, and even though Eflin is a starter, his loss hurts the bullpen as well. When Adam Morgan was added to the injury list on Wednesday, the Phillies were down to just one left-handed reliever, and some believed that Irvin was going to be recalled to replace him after being sent down in favor of Nick Pivetta. Now, however, Irvin will return to the starting rotation for the time being.

But all hope is not lost.

Monday is likely going to be a big day for the Phillies, and not just because they have the 14th-overall pick in the MLB Draft. It's all the day that free agent reliever Craig Kimbrel and starter Dallas Kuechel will no longer cost draft compensation if signed, and Matt Klentak and Co. could now be in on both, especially since the Phillies have shown interest, especially in Kimbrel, long before all these injuries started.

I've been getting the clear vibe that as soon as the dust settles from the draft next week, the #Phillies will be aggressively shopping for the best arms out there. This injury to Morgan just heightens the urgency to do that. https://t.co/1k3ymJ60cY

Unfortunately, the Phillies will hardly be alone in their quest to add pitching help.

The draft pick attachment goes away first minute Monday, at 12:01 am. So look for Keuchel/Kimbrel to sign after that, maybe not too long after. Hear Yankees/Braves strongly in on DK; Twins, Brewers, Cards, Rays among others. CK market also active. ATL, PHI, MINN, TB, many more.

Adding insult to injury, the Phillies are currently in Los Angeles for a three-game series against the Dodgers, the team with the best record in the National League. Not only is Friday night's lineup chock full of lefties for the Dodgers — compared to just one lefty in the Phillies 'pen — but Eflin was scheduled to pitch on Saturday against Clayton Kershaw.