Following offseason surgery, the former reliever is now cancer free — and has a new lease on life

Larry Andersen picked up the phone that November morning and within seconds he darted a glance across the bedroom at his wife, Kristi. The look said it. It was a frightened, on-the-verge-of-tears mien. He didn’t have to say a word. He just shook his head. Kristi knew. She ran right to him and they both sobbed.

That’s when the beloved Phillies’ radio color commentator found out he had prostate cancer.

“I heard that and my heart sank,” Andersen recalled. “I looked at Kristi and I saw all of her hope instantly gone. My doctor told me to go see him right now. I remember sitting in the doctor’s office, and when the doctor says he’s upset, and that he wished he would have caught this six months ago … that made me think.”

“LA” is someone who doesn’t scare easily. When you spend 18 years in the majors as a relief pitcher staring down some of the most intimidating hitters in the game, you can never show fear.

On Wednesday, December 5, 2018, Andersen underwent surgery to address his prostate cancer at Jefferson Hospital, going in peacefully and able to leave a better person for it. The whole experience struck a visceral chord.

Andersen turned 66 on May 6 and he has been issued a new lease on life. On the exterior, he’s as vibrant, and as witty, and as incredibly honest when the Phillies make a good play or a bad one as he’s ever been. On the inside, however, he's a changed man.

Hearing the “C” word can do that.

“Outwardly, I don’t think I’m a lot different, but inwardly I think I am,” Andersen said. “I’m a lot more emotional than I used to be. It’s gotten to me more. This experience has made me more emotional, and inwardly, it’s made me appreciate my faith.

“I didn’t stop believing in any of that. I stopped living my life the way I believed it. That’s what gets me the most. I feel this happened for a reason. I’d already gotten back to my faith, before this happened. My wife Kristi was a big part of that.

“I want to honor my father and this was God’s way of saying I’ve come back like the prodigal son. That’s what I took from this experience. God has a plan for my life and this was part of the plan. My message is simple: I don’t know how people make it through life without God.”

Andersen himself is an inspiration. Even though he doesn’t see it.

“Larry doesn’t want to see that or hear it,” Kristi says, “even though it’s the truth. Larry can put a smile on anyone’s face. We had to keep a sense of humor throughout everything, but that’s Larry. He’s someone who brings a lot of happiness to everyone around him.

“His humor actually did help. I can’t hide my feelings and this hurt me, seeing him like that. We were going through this together and it scared me. But he was more concerned with me than he was about himself.

The thought that something was wrong emerged when Andersen saw a wellness doctor last October. It was suggested he have some blood work to test his prostate-specific antigen (PSA) levels.

You try to be strong, and trust in the Lord. Nothing was easy. With cancer, it’s black-and-white. There is no gray area. You have it, or you don’t.

Andersen didn’t understand why. He felt great. He was walking and jogging a few miles a day. His energy level was high.

According to the National Cancer Institute: “There is no specific normal or abnormal level of PSA in the blood, and levels may vary over time in the same man. In the past, most doctors considered PSA levels of 4.0 ng/mL and lower as normal. Therefore, if a man had a PSA level above 4.0 ng/mL, doctors would often recommend a prostate biopsy to determine whether prostate cancer was present.

As a precaution, Andersen was referred to Dr. Perry R Weiner in late October. He told Dr. Weiner the medications he was taking. Once Dr. Weiner heard that, he told Andersen to forget everything he said about the PSA. The meds kept the PSA low. His level was 2.9 with the meds. Without them, it was more like 5.8. The meds masked his actual PSA level.

A biopsy was suggested on Nov. 1.

“We ran into a friend of Kristi’s father walking by the doctor’s office and we told him we were there for a biopsy,” Andersen said. “This guy tells me the biopsy is going to kill me it’s so painful. I’m like, ‘I’m going in in five minutes, you don’t have to tell me that right now.’

“It wasn’t as bad as I thought it would be.”

But it would get bad.

Andersen soon received the results — and the call no one wants. There were 12 samples taken and six were cancerous, with one strand of the biopsy was an “8.”

“The scariness of going through it, that’s for real, regardless of how deeply religious you can be, God can only help so much with that, but He can’t take that fear away,” Andersen admitted. “I was never scared like this.

“Telling [play-by-play man] Scott [Franzke] was really hard, too. Scott is family. We’re very close. He sent me a box of diapers for Christmas.” 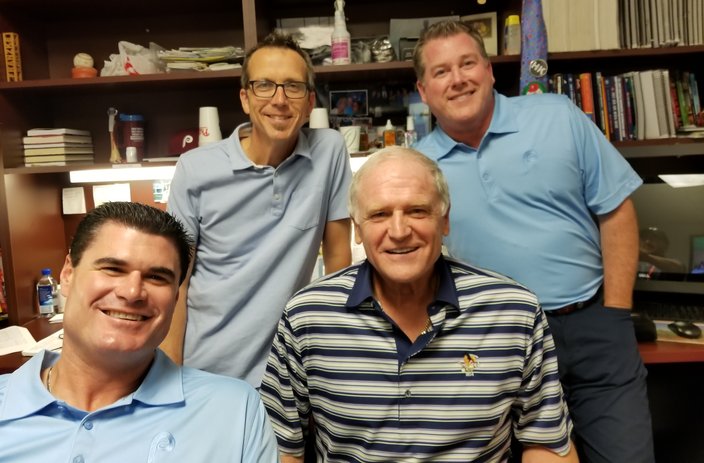 Larry Andersen, center, surrounded by other members of the Phillies broadcast, Ben Davis (left), Scott Franzke (back left) and Gregg Murphy (back right).

The surgery was Dec. 5 and the next day he was able to leave. But part of the surgery required his stomach to be pumped with air so the robotic surgery could see better. It caused some discomfort. LA prefaced everything to Kristi that it was “just air and this has to come out.”

The other obstacle was dealing with a catheter for eight days — and he never had to wear one prior to this surgery.

I don’t know if I’m clutching to life more, or I’m letting go more. This has given me more perspective on the little things. Why am I sweating the little things? You either trust God or you don’t. I trust God.

“It wasn’t a painful thing, but I had to keep walking, because they didn’t want me to get any blood clots, and I had to get a cab to get home,” Andersen recalled, laughing. “I didn’t know what was going to happen. Was something going to come flying out?”

The catheter was removed on Dec. 13. Andersen was on the table, the nurse removed it, “and my wife was with me,” Andersen recalled. “The nurse told me to take a deep breath, and slowly let it out. Poof, the catheter was gone. Then the nurse said, ‘I don’t know how to say this, and it’s kind of awkward, but I have to tell you, I’m a big fan.’

Andersen just looked down and smiled.

“I had to laugh. Part of what she said and part of having no catheter made me laugh again.”

On March 5, Andersen had blood work done in spring training and it came back clean. Every three months he’ll undergo checkups this first year.

Strangers today see LA and come up to ask how he’s doing. It doesn’t matter where it is. That’s what struck him the most about his battle.

“I don’t know if I’m clutching to life more, or I’m letting go more,” Andersen said. “This has given me more perspective on the little things. Why am I sweating the little things? You either trust God or you don’t. I trust God.

“This has allowed me to sit back and accept what’s going to happen. People come up to me all of the time and ask me how I feel. You feel honored and blessed that people care that much.”

This opened LA’s eyes as to how much he is truly appreciated.

“He didn’t realize how much he’s beloved,” Kristi said, “and this has helped him realize that. He’s the biggest blessing and gift in my life—and I think in a lot of people’s lives. Larry touches people.”

The Larry Andersen I know

It was interesting in my conversation with Larry Andersen how he had some regrets over what transpired during the 1993 season. "LA" had a good time, like everyone else on that team. But it brought me back to a side of LA that everyone who knows him sees daily, a truer essence of LA that has always been there.

This Phillies’ caravan was my first. And it happened to be with the 1993 team. They were beloved by the fans, but hated, for the most part, by the media that knew them and had to deal with them on a daily basis. It was a team that didn’t carry much interest in the early months of 1993. The Phillies were coming off a 70-92 season and finished last the previous year.

They were about to get Lenny Dykstra for a full season, and “The Dude” was a fan favorite in these parts. Again, little do fans really know.

Well, regrettably, some found out one night during one of the caravan stops. It was held at a posh center-city hotel, where fans could “meet and greet the Phillies.” Head down, though fairly hospitable for the allotted time he had, Dykstra signed autographed pictures and slid them across the table with his fingers to the little kids who waited in line to meet what they thought was “their hero.”

But as soon time ran out, Dykstra, I recall, was one of the first ones looking to get out — no matter what line of kids was still left. The players had been charter bussed in, and Dykstra, with a mouth full of chaw, began spitting on the carpet of this upscale hotel lobby, tobacco juice dribbling down his chin, and cursing at the kids still left, babbling something like, “These parents are a------, get your kids!”

Standing nearby all of this and shaking his head in disbelief was Larry Andersen. While Dykstra trudged off in an embarrassing tirade, spewing out dark-brown wads of tobacco juice everywhere, LA kindly walked over and said hello to the kids, and then apologized to the bug-eyed, shocked parents for what they just witnessed.

Many of the kids didn’t know who LA was, but the parents knew him and were appreciative. LA signed every autograph and it didn’t matter whether or not he almost missed the last bus back to Veterans Stadium.

That’s the LA I’ll always remember from the ’93 team. Lovable louts to the fans, pains-the-asses to everyone else who had to be around them — with a few exceptions that included a grizzled, veteran relief pitcher high on the list.