Dombrowski will remain as president of baseball operations through 2027 following a run to the NL pennant. 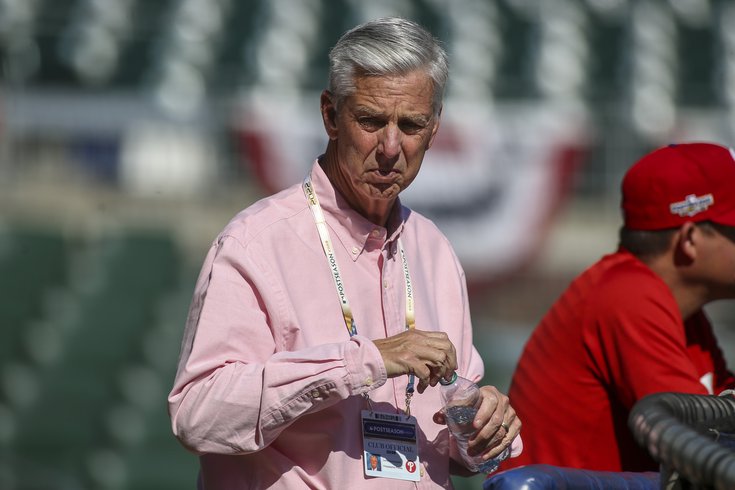 Phillies president Dave Dombrowski watches batting practice prior to the NLDS down in Atlanta.

He'll have time to try and get them back and win those last two.

The Phillies announced Tuesday morning that they have extended Dombrowski's contract for three years to keep their president of baseball operations around through 2027 as he works to get them ready to run it back in 2023.

“We are extremely pleased that Dave has agreed to continue to lead our baseball operations department through the 2027 season,” owner John Middleton said in a statement. “His astute knowledge of the game and keen eye for talent set us on a path to win the National League pennant. I firmly believe that under his stewardship, we will reach our ultimate goal.”

“I am excited to sign a contract extension with the Phillies,” Dombrowski added. “This is a great organization and I feel so fortunate to be surrounded by such tremendous personnel. We have made significant strides in many areas of baseball operations over the last couple of years, and I am committed to building upon them to form a championship organization for the city and our incredible fan base."

Dombrowski was brought on in December 2020 as the club's first-ever president of baseball operations after its rebuild under the former front office of Matt Klentak and Andy MacPhail kept seeing the teams stall out.

The Phillies would do so again in 2020 and 2021, but for 2022, Dombrowski made two major signings with sluggers Kyle Scwarber and Nick Castellanos that made it clear to the current core that it was October or bust.

It wasn't always pretty, but they finally broke through, and once the Phillies did, they took off to the NL pennant.

"We gotta give credit to Dave Dombrowski," Middleton told PhillyVoice in the clubhouse celebration after the Phillies put away the Braves in the NLDS. "There's a reason why he's the only guy in the history of baseball to take three different franchises to the World Series. He is so smart, he can construct teams in so many different ways around so many different abilities and he figured it out."

Soon after he made it four.

The goal is to create more of it in Philadelphia, hopefully with his and the franchise's third-ever championship.