Top pitching prospects Mick Abel, Andrew Painter, and Griff McGarry will report to spring training From there, Dombrowski said, anything can happen. 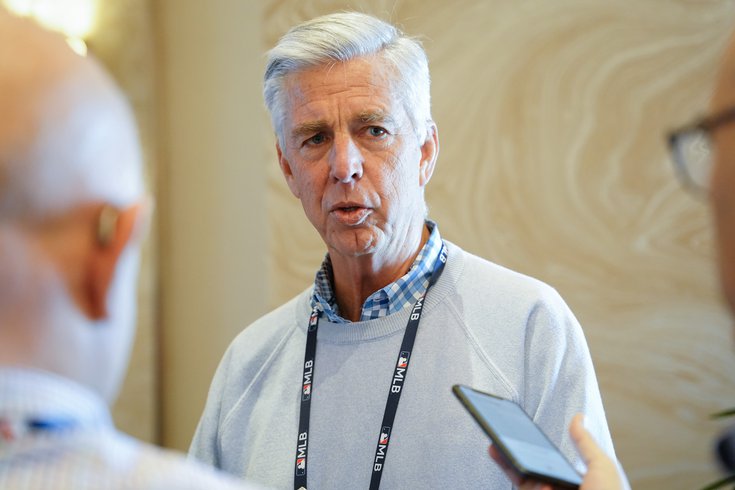 Phillies president Dave Dombrowski, pictured at the MLB GM Meetings, said there's going to be a spot in the rotation reserved for a young arm.

Dave Dombrowski will be on the lookout for a veteran starter in free agency, but there's going to be a spot in the rotation open for a younger arm too.

He wouldn't say who it was going to be, he really can't this early into the offseason, but most fans probably have three names at the ready: One of top pitching prospects Andrew Painter, Mick Abel, or Griff McGarry.

"Those three guys will come to spring training with us," the Phillies president told the media on Wednesday. "I can't say there's anticipation that they're going to make our rotation to start the season, some are further along than others, but they'll be in camp and once you're in camp, anything can happen.

"We are keeping a spot open for a youngster, and when I say youngster, I not only mean those three...Would [Bailey Falter] and [Cristopher Sánchez] fit into that category and anybody else who may join it? Could two? Perhaps two could, but we're really only looking at one."

Maybe 2023's Opening Day at the end of March is a bit too aggressive of a deadline for either of the three, but Abel, Painter, and McGarry have been accelerated through the Phillies' farm system this past season and may not be much further off from a big-league debut anyway.

The trio of righthanders' pitches are developing, they're all going deeper into games, and are adapting quickly to tougher competition as they climb the ranks. They're moving fast and they're almost there.

Still, the Phillies don't want to risk too much too soon.

"Time will tell with Painter and McGarry and all of those guys," manager Rob Thomson said. "They haven't even pitched in a big-league spring training game yet, so we'll let them do that first and see what the comfort level there is. Then it's a whole other animal once you turn the lights on out here (Citizens Bank Park) and pitch in this environment."

McGarry, the club's fourth-ranked prospect and the oldest of the three hurlers at age 23, finished the final month of the minor-league season in Triple-A Lehigh Valley after blazing through High-A Jersey Shore and then Double-A Reading.

He impressed in Reading through seven starts, recording a 2.20 ERA with a 1.01 WHIP and 39 strikeouts, but only pitched out of the bullpen with Lehigh Valley in 1-2 inning bursts, posting a 9.00 ERAm with a 2.00 WHIP and 9 Ks in seven appearances.

Painter, the No. 1 prospect who will be just shy of 20 when next season starts, finished 2022 surging through the fast track, with a 1.40 ERA and 69 strikeouts in nine starts at Low-A Clearwater, a minuscule 0.98 ERA with 49 Ks in eight start for Jersey Shore at High-A, and a 2.54 ERA with 37 punchouts in five goes for Reading in Double-A.

The likelihood is that, after facing some major-league level batters down in Clearwater this spring, Abel, Painter, and McGarry will be sent back to the minors, and that rotation spot to start will go to either Falter or Sánchez, who already have some big-league experience under their belts.

It's an enormously tough ask for any young player to skip over Triple-A ball and jump straight into the majors, and even though all three prospects are progressing fast, again, the Phillies don't want to risk too much too soon.

Falter, especially, held up admirably this season when the Phillies handed him the ball. The 25-year old lefty posted a 3.86 ERA in 20 appearances with 16 of them being starts, usually going 4-6 innings to fill out the backend of the rotation.

The immediate priority, for now, is also in that search for another established starter. Aaron Nola, Zack Wheeler, and Ranger Suárez will be back to round out the top of the rotation, but they will need someone behind them in the fourth spot with Noah Syndergaard, Kyle Gibson, and Zach Eflin all on expiring contracts.

"We're open to and feel that we probably need to do something from a starting pitching perspective," Dombrowski said. "At least somebody there for our depth even though we have the big three guys and we have Falter and Sánchez and somebody like Painter coming."

Painter in particular was the prospect most frequently asked about during Wednesday's media availability.

Thomson was sure to praise all the players coming up through the farm system, echoing the sentiments he shared after the World Series, that between the current Phillies and the ones on the way up, they'll be what makes the success found in 2022 sustainable long-term.

But of Painter, specifically, he said, "That's a big-time arm and we have to be really careful with it."

And one that's almost there.