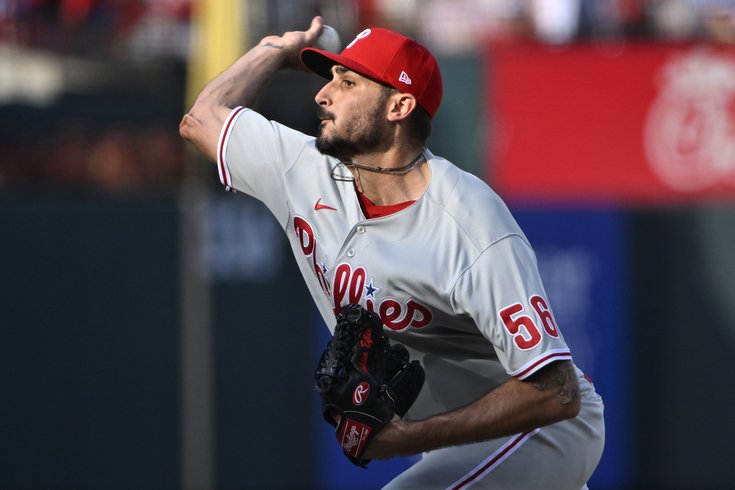 Zach Eflin pitching during the Phillies' Wild Card round against St. Louis.

Zach Eflin will go to free agency, meaning his run with the Phillies is likely over.

Per the New York Post's and MLB Insider Jon Heyman, Eflin declined his $15 million mutual contract option with the Phillies in search of a new deal.

Once a prospect in part of the return that sent Jimmy Rollins to the Dodgers in the winter of 2014, Eflin developed into a regular part of the Phillies' rotation, but a history of knee issues, continued by one this summer that kept him out for an extended amount of time, forced a transition into the bullpen for the final stretch of the regular season.

He did pretty well at it though, making six appearances through September with a 1.35 ERA and 0.60 WHIP.

Then, in the October 3 game down in Houston that clinched the third and final NL Wild Card spot, and the Phillies' first postseason berth in 11 years, Eflin was called on in the ninth and notched the first save of his career.

Eflin also record the save in the clinching Game 2 of the Wild Card round out in St Louis, securing the franchise's first playoff series victory since 2010 and ensuring the playoff run would return home to Citizens Bank Park for at least one round.

Throughout the Phillies' run to the World Series, the 28-year-old righthander made 10 appearances out of the pen, mostly as a mid-late inning reliever.

The door is still open for Eflin, who was one of the longest-tenured players on the roster, to return to Philadelphia on an entirely new contract, but wherever he goes, he does wish to start again.

“No, I wanna start, man, I’m a starter,” Eflin told Phillies Nation's Tim Kelly. “I feel like I’m a purebread starter. I think at least I proved that I can relieve, if need be. But I’m a starter through and through, man.”