What they're saying about the Phillies: Now what?

The end of the run is still fresh. There's a lot to process, and some tough decisions looming too. 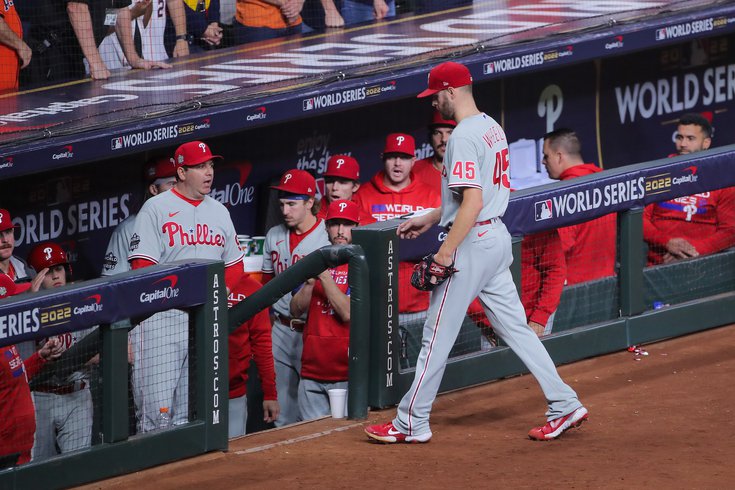 Phillies starting pitcher Zack Wheeler walks toward the dugout after being pulled in Game 6 of the World Series.

We're a couple of days removed. Maybe some of the sting from Saturday night has subsided. Maybe it hasn't.

The process is different for everyone, but baseball also waits for no one.

The Phillies' miracle run to the World Series ended right where it started when they lost the deciding Game 6 to the Astros down in Houston.

Now, in the shortest offseason a team can have, comes the next part: Figuring out how to get back.

The Phillies will have a lot to process with the end of the run still fresh, and also have some tough decisions looming on the near horizon.

It's the offseason now.

Here's what they're saying about the Phillies...

Worth a thousand words

Back in September, when the Phillies looked like they were falling apart again, Rhys Hoskins, on a whim, bought some disposable cameras on the way out of an Urban Outfitters in Chicago.

Those cameras went to capture every moment of what became a magical postseason run, which had so many that Hoskins had to go and buy more.

After Game 6, as the Phillies huddled around one another in a somber, but appreciative, clubhouse and reflected on their run over a final round of beers,  the cameras sat in Hoskins' locker with the photos yet to be processed and a fresh one that will go completely unused for what could've been a World Series celebration.

Wrote Jake Mintz of the scene after the World Series:

To his left, perched on a shelf at the top his locker was a black and green disposable camera. On it, a number of photos from the team’s two phenomenal Fall Classic wins and also, a few pictures left untaken. Somewhere in Hoskins’ belongings is yet another camera, untouched and unused. It is full of images that will never be: A victorious celebration, a trophy ceremony, a magnificent parade.

Hoskins has yet to get any of the photos from Philly’s magical month printed or processed. He says that will happen at some point this offseason, once this all fades a bit. But whenever Hoskins gets around to it, he knows he and his teammates will look upon those pictures with pride, and reminisce with one another until the beers run dry.

Because sometimes, it takes a while for memories to develop.

Few understand that better than Hoskins and the Phillies. [FOX Sports]

Fan favorites Jean Segura and Zach Eflin, who both have contract options, could be joining them in the market within a week.

Both would like to stay, but both also know the realities of the business.

“I would love it,” Segura told The Philadelphia Inquirer's Alex Coffey earlier in October on coming back. “I know that’s a tough decision for them, I understand. But I would love to finish my career here. [I’m happier] not just because we got to the postseason, but because of the guys, the city, the staff. I would love to finish here, but if not, we’ll see who wants me and who doesn’t want me.”

Segura posted a photo of the city's skyline with a "Thank you" to his Instagram on Sunday. Read that one how you will.

On Eflin, one of the longest-tenured Phillies who had his own unique adventure through the rebuild, multiple knee issues, and a makeshift transition into the bullpen, Phillies' Nation's Tim Kelly:

The Phillies could decline the $15 million option, but look to bring Eflin back at a lower price, perhaps on a deal with heavy incentives based on starts made and/or innings pitched.

He and his agent, Tom O’Connell, will have to decide whether returning to the Phillies, probably on a one-year deal, is what’s best for his career. For what it’s worth, an “outside expert” projected in a piece written by Jon Heyman of The New York Post that Eflin could get a two-year/$20 million deal this offseason.

But to land a multi-year deal, Eflin could have to change uniforms. And he says that his hope is to remain in red pinstripes.

“There’s no other place I really want to play other than this place,” Eflin said. “It’s a dream to be able to put on that jersey every single night and go to war with these guys. So we’ll see what happens.” [Phillies Nation]

Now that it's all over, the focus will quickly have to shift to the next goal for Phillies president Dave Dombrowksi: Trying to make it back.

The process starts immediately with the GM meetings happening this week in Las Vegas, and there's going to be a lot to consider.

The Phillies savored every minute together in the clubhouse after Game 6 and at the team hotel later because, while most will return in 2023, not all will. By Thursday, the Phillies must decide on Jean Segura’s $17 million option. They are expected to decline that, as a means to keep all doors open.

They will formally exercise Aaron Nola’s $16 million option in the coming days. They must make a medical evaluation on Bryce Harper, who might require a procedure to correct the damage in his right elbow that prevented him from throwing all season. Then, there are larger considerations regarding every pitcher who shouldered a heavy workload into November. Zack Wheeler insisted he was healthy at the end. But will he have a normal offseason?

“I don’t know,” Wheeler said. “That’s something we’re going to have to talk about.”

The goal is to minimize the hangover from a National League championship. A long season has its effects on everyone involved. The Phillies are convinced the past month was not a fluke. Beginning this week, when the offseason course is plotted, the organization has a mission to make the most of this momentum. [The Athletic]

What's next for Harper?

Speaking of Harper, he and the Phillies do need to figure out what to do about the minor UCL tear in his elbow.

Understandably, the reason he couldn't play in the field got lost in the shuffle as he tore through the postseason at the plate.

But the ideal scenario for next season is to have him back in right field.

As NBC Sports Philadelphia's Jim Salisbury writes, the Phillies will figure out what kind of process it will take to get there in the next few days:

Throughout the season, the specter of Harper requiring surgery to fix the tear in his elbow loomed. The time to find out is here.

Harper is expected to undergo evaluation this week – an MRI will likely be included – to determine how much healing has occurred in the ligament since he first sustained the injury. The results of the evaluation will determine whether Harper needs surgery to complete the healing.

If Harper needs surgery, it will impact his readiness for next season. However, there are different surgical options, each with different timetables for recovery. [NBC Sports Philadelphia]