Dombrowski said Harper will have surgery next week and expects the process to "slow him down for the season." 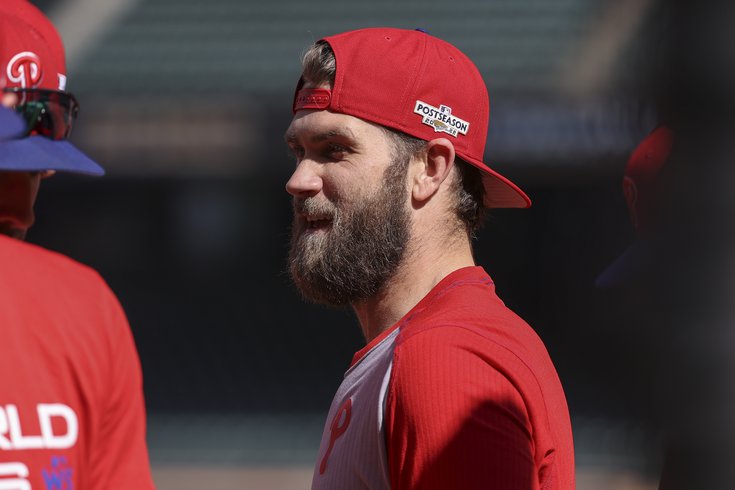 Phillies designated hitter Bryce Harper ahead of the 2022 World Series.

Bryce Harper will undergo elbow surgery next week to address the partial UCL tear in his throwing arm, Phillies president Dave Dombrowski announced at the start of his media availability on Wednesday.

The surgery will be performed by Dr. Neal ElAttrache next Wednesday, but beyond that, Dombrowski didn't have many details to offer aside from that he expects the recovery process, whatever it may be, to overlap with next season.

"At this point, we'll have something at that time with the surgery in the anticipation that something will happen," Dombrowski said. "I would think it will slow him down for the season, but we'll know more next week."

Harper suffered the tear in April and while he hasn't been able to throw a baseball since, he was still able to swing a bat and settled into the designated hitter role, which was crucial in the Phillies' run to the World Series.

Dombrowski couldn't confirm if Harper would require Tommy John surgery, which usually comes with a lengthy recovery timeline as a complete repair of the UCL, or a surgery similar to Rhys Hoskins' from October 2020, "an internal brace repair" that reinforces the ligament rather than a reconstruction of it.

Either way, Harper and the Phillies are dealing with a tight timeline because of the short offseason, which Dombrowski said could alter the club's plans through trades and free agency over the next couple of months. He said they still need to wait and see what the full prognosis will be, but are considering all their options.

"We're having meetings now," Dombrowski said. "Hopefully we'll cover every single topic we can think of, possible clubs, free-agent signings, trades, all of that stuff. In the back of our minds, there will be discussions of what do we do IF [Harper's sidelined], which may be nothing, because we're in a situation that, right now, we're looking at him coming back and DHing at some portion of it.

"We have other players that can DH between when you look around, [Kyle Schwarber], [Nick Castellanos], Hoskins, [Alec Bohm], and [J.T. Realmuto] if we want to give him some time off. So we need to kind of fit that all into the total picture of what we'll be doing."

Harper committed to Team USA for the World Baseball Classic, a tournament that runs parallel to spring training, back in August, and was projected as their starting right fielder. It's unclear if that plan is still in the cards, though it does appear highly unlikely now.

Going without Harper also isn't uncharted territory for the Phillies as they had to do so for two months in the middle of the summer while he was out with a broken thumb. They more than managed, staying well within the playoff hunt until he returned. It created opportunity for others to step up, manager Rob Thomson said Wednesday, and they did.

Still, the Phillies wouldn't prefer being without their MVP-caliber star again.

"You don't ever want to lose Bryce, you really don't," Thomson said. "He's one of the best hitters in baseball, if not THE best, but we spent a lot of time last year without him. Guys responded and it gave opportunities to other people to step up and they did. So while we would be missing him, and I'm looking forward to getting him back, it'll give somebody else an opportunity."