The Phillies should get one consistent bat back soon, but will have to continue waiting for the other 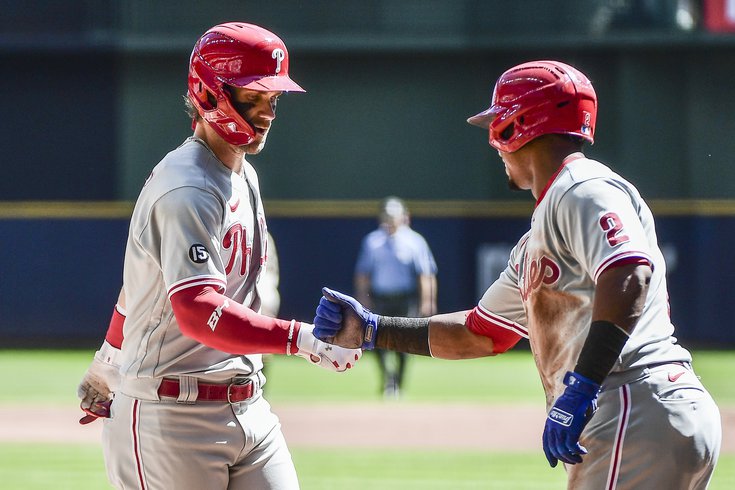 Per multiple Phillies beats, Harper had his surgically repaired thumb re-evaluated on Monday, but it hasn't healed enough to where the pins can be removed yet. He'll be looked at again a week from now.

Harper suffered a broken left thumb back on June 26 in San Diego when he was hit by a pitch from the Padres' Blake Snell.

Bryce Harper saw the surgeon today and isn’t showing enough healing to pull the pins from his broken left thumb this week. He’ll be reevaluated next Monday.

It was a devastating injury for the reigning NL MVP, who was on a tear at the plate, and critical blow to the Phillies, who would have to go without their top player for an indefinite amount of time.

Harper vowed to return this season, and optimism grew that he could return sooner than expected, but getting the pins removed after Monday's evaluation was always a best-case scenario in the recovery process.

How about some good news?

Jean Segura will begin his rehab assignment Tuesday in Triple A Lehigh Valley, which hopefully means his reliable bat will be returning to the Phillies' lineup soon.

Segura broke his finger trying to lay down a bunt on May 31 against San Francisco, and it was evident right away that it was bad. The pitch hit him directly on the right hand and he went straight to the dugout. He was announced out for the next 10-12 weeks the day after.

Before going down, Segura was the club's most consistent hitter behind Harper and had a serious All-Star case growing as his numbers quietly kept up among baseball's top second baseman.

It would be a huge boost for the Phils if he can pick up where he left off once he returns.

Ahead of Monday night's series opener against the Braves, the Phillies announced that they signed first-round pick Justin Crawford along with 14 others from their 2022 draft haul over the All-Star break.