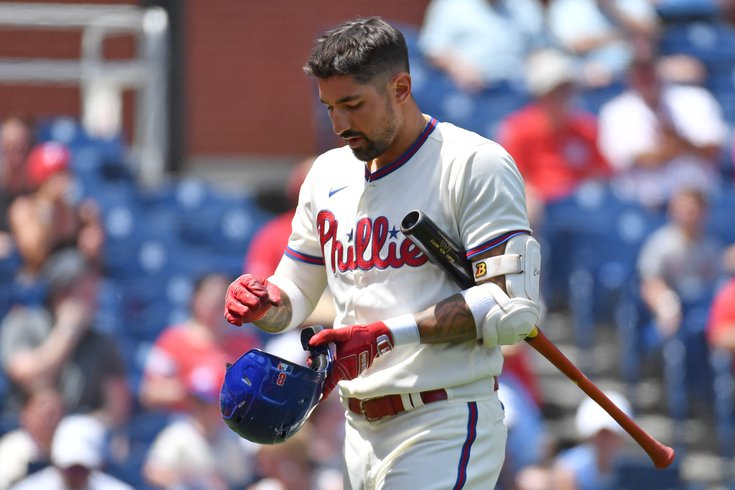 It's been a rough 2022 season for Nick Castellanos.

Not good! The Phillies were swept in South Philadelphia this weekend. Facing the lowly Cubs, the Phils, now at 49-46, squandered a prime opportunity to gain ground in Wild Card race. They entered the series in control of the third and final Wild Card spot in the National League and now find themselves 1.5 games out as of this writing. So much for this team grabbing the city's attention ahead of Eagles training camp!

A few notes from a Phillies series fans would love to forget...

You can't lose 15-2. You just can't. That's how the Phillies opened the second half of their season on Friday after improbably finding themself in playoff positioning following an uneven start to the 2022 campaign. Five of those runs came when backup catcher Garrett Stubbs pitched a meaningless ninth inning, but it's still a bad look all around. Kyle Gibson didn't last five innings before surrendering six runs. If not for the Blue Jays destroying the Red Sox 28-5 that night, that Phils outing would've been the most embarrassing performance of the entire weekend in baseball.

The Phillies had the third-easiest strength of schedule post-All-Star break in the majors. That was supposed to provide encouragement for a late-summer playoff push. The Cubs entered this series 22 games under .500 and promptly swept the Phils.

It's a bad sign when the most noteworthy moment of series comes off the field. Following Saturday's night loss to the Cubbies, Nick Castellanos got into it with NBC Sports Philadelphia's writers Jim Salisbury. Salisbury asked Castellanos if heard the boos from the fans. Castellanos didn't respond too well to what he summed up as a "stupid question." Here's the interaction that ended with Phillies staffers breaking up the interaction and interview:

Things got a bit contentious in the #Phillies clubhouse tonight during and after Nick Castellanos' media availability and our @6abc cameras were there. Thoughts on this exchange? pic.twitter.com/DcqmbIpz2e

I'm off two minds on this. It was a valid question from Salisbury. Castellanos has had a hellacious first season in Philly. His OPS of .655 is disastrous. A big money free agent signing, the early returns are rough for a dude who was an All-Star and won a Silver Slugger award in 2021. If you're not playing up to standard, criticism is going to come and criticism is deserved. I also liked that Castellanos showed some semblance of emotion and backbone here. He cares and is pissed about the way this season is going. He got a hit in the seventh inning on Sunday (though he went 1-for-4 overall). A pulse is good! Will it last? I doubt it, but, hey, perhaps it's a start.

Go work the phones, Dave Dombrowski. Another season where the Phillies miss the postseason is unacceptable.