What does the Phillies' second half need to look like to make the postseason? 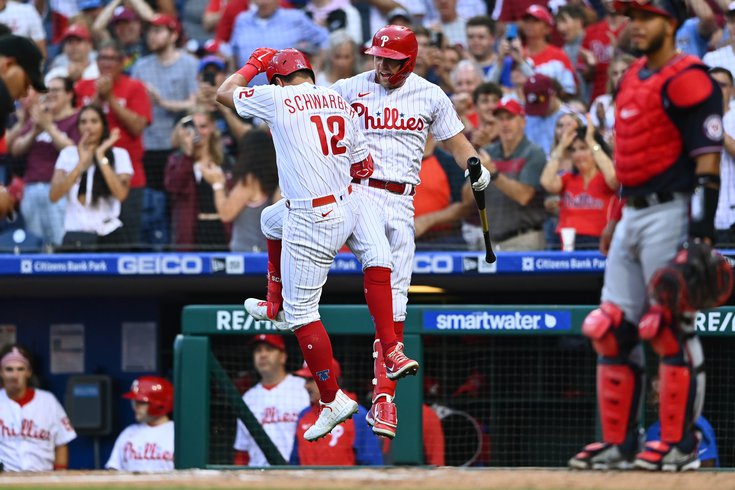 Kyle Schwarber and Rhys Hoskins' success at the plate will be crucial to the Phillies' postseason hopes.

The Phillies will pick up the back half of their season on Friday, starting with a six-game homestand against the Cubs and then the Braves, as the race to snap a decade-long postseason drought shifts from a marathon into an all-out sprint.

Thanks to a sweep of the Marlins down in Miami to close out the first half, the Phils went into the All-Star break with a 49-43 record and a hold of the newly added third Wild Card spot, with ownership of a tiebreaker over St. Louis, who is right behind them in the hunt.

But if they're going to hold on, finish higher in the Wild Card chase, or even catch the Mets and the Braves in the fight for the NL East, there's still plenty of work to do.

How much work exactly? Well, recent history can give us a pretty good idea.

First, where things stand in the NL Wild Card race heading into Friday:

And the NL East picture:

They're not a lock — no one ever is at this point in the summer — but the Phillies are very much in the postseason picture, which is a stark and very welcome turnaround from where the team was at the end of May, back when they were struggling to do much of anything under now former manager Joe Girardi.

Through June and July (so far), the club went on an impressive 28-14 run, even with the devastating losses of MVP Bryce Harper and the very reliable Jean Segura, plus other holes and concerns throughout the lineup. Kyle Schwarber and Rhys Hoskins have picked up the slack at the plate in the meantime, Aaron Nola and Zack Wheeler have been a formidable 1-2 punch at the top of the rotation, and the bullpen has been...pretty decent, actually, which all have the Phillies six games over .500 and in fairly good position to go on a run in the second half and finally make it back to October.

They're going to need Harper back at least, which could be sooner rather than later, and likely a couple of moves at the trade deadline to bolster their depth. But given the club's current record and a look back at the NL Wild Card teams from the past decade, if the Phillies can maintain their current course under interim manager Rob Thomson, they're probably looking at around 40 wins through the next two and a half months to pull this off, and that's just to get to the postseason by any means possible.

Here are all the NL Wild Card teams since 2012, when MLB added the second spot, along with their first and second-half records. (Note that the clubs that had similar first halves to the 2022 Phils are marked in bold and that 2020 isn't included because of the condensed 60-game schedule and altered playoff format):

The NL East isn't entirely out of the question either, although the Phillies will have a much steeper challenge catching up to the division-leading Mets and an also surging Braves club.

With where things stand right now, FiveThirtyEight projects the Mets to win 97 games, Atlanta 95, and the Phillies 88. For that to change, the Phils would likely have to go on an unreal run paired with a collapse down the stretch from the Mets, Braves, or both. Then again, that has happened before.

Ultimately though, if the 2019 and 2021 postseasons have shown us anything, it's that the division crown is nice, but you just have to get in. The Braves survived the first half of last season, got hot in the second — minus their superstar outfielder in Ronald Acuña Jr. — and won the World Series as the NL East champion.

The 2019 Nationals were similar but did it as a Wild Card. They struggled but hung around through the first half with manager Dave Martinez stressing the whole way to "stay in the fight," broke through in the second, and eventually, won the fight.

The NL East winners since 2012, again with teams that had similar first-half records to the current Phillies highlighted in bold:

Another point to a potential return of Red October is conquesting past demons. The Phillies have been on the cusp of breaking out for the past several years, ever since hiring former manager Gabe Kapler ahead of the 2018 campaign, but they've yet to put it fully together. For numerous reasons, this generation of Phillies baseball has routinely stalled out down the stretch.

But with team president Dave Dombrowski making the decision to go above the luxury tax threshold in the spring, it's been clear from the start this has to be the year the Phils get over the hump.

To wrap things up, if there's inspiration within the franchise itself, then look no further than the last time it snapped a playoff drought. After 14 years and to the very last day of the season, with help from a monumental implosion by the Mets, the 2007 Phils hit their stride at just the right time, won the division, and sparked the most successful run in club history.

The 2010 Phils also struggled somewhat through the first half of their season, mostly due to injury, but found themselves big time in the second on the way to a fourth-straight division crown.

Whatever the second half of 2022 becomes for the Phils, the sprint begins Friday.