MLB power rankings roundup: Where do the Phillies stand at the All-Star break?

The Phils are very much alive in the playoff race, but have holes to fill with the trade deadline now approaching 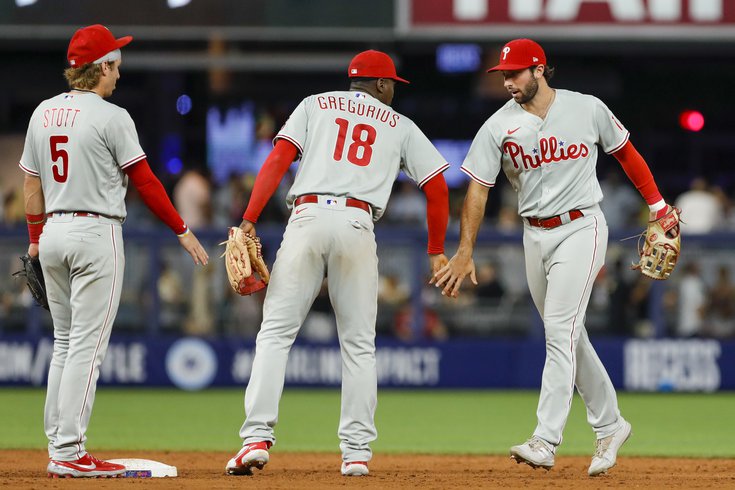 The Phillies celebrate a win over the Marlins in Miami on July 15.

It's the All-Star break and at 49-43, the Phillies hold the third NL wild card spot with a tiebreaker over St. Louis, who is right behind them.

It's quite the turnaround for the club after it looked completely lost through the first two months of the season, falling behind in the NL East quickly. But after making the call to fire Joe Girardi, the Phils went on a 28-14 run through June and July to close out the first half and put themselves very much back into the playoff picture, even with losing Bryce Harper along the way.

But look, it's also the All-Star break, which means it's the slowest point in the sports calendar. So how about a power rankings roundup? It has been a while.

Here's a breakdown of how a few outlets see the Phillies at the break:

And although most of it isn't anything you haven't heard already about the team, here are some of the explanations:

Doing good, could be better

The Phillies have been a dramatically better team of late, even with Harper sidelined. Aaron Nola and Zack Wheeler are as good of a combo at the top of the rotation as any, and Kyle Schwarber and Rhys Hoskins have been picking up the offensive slack.

Still, they need fielding and bullpen help with the deadline now approaching.

"Like Toronto, Philly has been playing better baseball since firing its manager (Joe Girardi). Starters Zack Wheeler and Aaron Nola can go toe to toe with almost any other 1-2 punch in the league and the offense can still mash without Bryce Harper. There still are some glaring needs ahead of the deadline, particularly defensively and in the bullpen. [Yahoo Sports]

The Phillies currently hold that wild card spot and have been getting by despite how banged up they are. But if there are any aspirations of catching up to Braves and Mets in the division race, they're going to need to get healthy and find another gear as The Ringer's Michael Baumann writes:

"The Phillies look like a different team after firing Joe Girardi in early June and are all of a sudden in the thick of the NL wild-card race. They’ll need to find another gear if they want to chase down the Mets and Braves, but right now, survival is the name of the game. The Phillies need enough offense from the likes of Matt Vierling and Darick Hall to keep them above water until Bryce Harper and Jean Segura come back from the IL. And they have to hope that Kyle Schwarber doesn’t face a suspension for taking a dive during the heavily wagered-up Home Run Derby. (This is when I begin screaming, “The fix was in! This goes all the way to the top!” while being dragged away by MLB security.)" [The Ringer]

Tougher than they look

That the Phillies are still getting by without Harper in the lineup says a lot about the club's character right now, and is perhaps in stark contrast to the team they were at the start of the year. Still, they will need him back and, again, do have other needs to address with the trade deadline approaching.

"The Phillies are 27-14 since firing manager Joe Girardi and 12-8 since losing Bryce Harper to a broken left thumb on June 25, so if nothing else, this team has proven capable of overcoming adversity. The one-two punch of Zack Wheeler and Aaron Nola is once again as good as any in baseball, and there's plenty of thump in the lineup even without Harper, but there are holes to plug at the deadline." [Bleacher Report]