Phillies prospect watch: Who might be on the move at the trade deadline?

And who is untouchable? 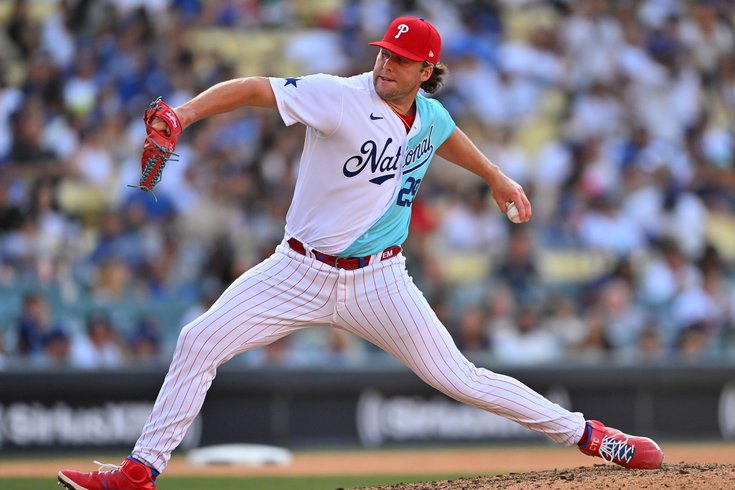 The trade deadline is inching ever closer and it has never been clearer that the 2022 Phillies need help if they hope to end the franchise's postseason drought.

The team will likely be hunting for a starting pitcher, relief help and potentially an outfielder over the next week or so and in order to do so, they'll need to part ways with some of their farm hands.

So which of the top prospects in the farm system could be cogs in a deal to help the Phillies contend? Which youngsters will the team to be trying to hang on to?

Here's a closer look at the top players in the minors, and at who is currently playing well and who is struggling:

*The list below is from MLB.com's midseason prospect rankings and does not include the 2022 draft class, which hasn't played yet in the minors anyway.

The team's top overall prospect has allowed just one earned run (and four unearned) over his last five starts at Jersey Shore. After racking up a ridiculous 69 strikeouts and a 1.40 ERA in 38.2 innings in Clearwater, the 19-year-old has a 2.16 ERA and 24 strikeouts (to just four walks) in 16.2 innings after his promotion. He and fellow ace prospect Mick Abel are as close to untouchable as anyone on this list.

O'Hoppe was one of the Phillies representatives in the Futures Game over All-Star Weekend and based on his position — catcher — he might be the top prospect moved at the deadline simply because his road to the majors is blocked by J.T. Realmuto and the surprisingly hot-hitting Garrett Stubbs. Over his last 10 games, O'Hoppe is hitting .281 in Reading. He has 15 homers and 44 RBI though 69 games, pretty good numbers for a backstop at any level.

Sometimes a vote of confidence can go a long way. Rojas, 21, hit just .230 in Single-A this spring but was called up to Reading anyway, and he's succeeded there to the tune of a .290 batting average through 16 games. The Phillies are desperate for a homegrown MLB-level outfielder and perhaps they'll find one from an international player rather than a drafted one.

Wilson went 4-for-4 Friday night and added two more hits on Sunday, and that's good enough to get on our hot list. Over his last 10 games last year's second round pick has improved his season batting average five points.

The system's pitcher of the month from June had a bounce back performance Saturday tossing six scoreless innings and allowing just two hits for Reading after struggling in his debut prior. Last year's fifth round pick has a 3.76 ERA over two levels this season and will be given time to grow into the Double-A level after his promotion a few weeks ago.

Morales continues to mow down hitters in Double-A as one of the farm systems best relief pitchers. He had an opportunity and seized it after injuries brought him to the big leagues in May, and since then he's been itching for a return trip. The 22-year-old has a 1.69 ERA over 26.2 innings in Reading. He has 47 strikeouts to just 16 walks and opponents are hitting .093 against him. He'd be a juicy prospect for a trade partner — or a potential bullpen piece down the stretch if his dominance continues.

Morales has competition for that "top reliever" moniker, however, from Miller. The 24-year-old has a 1.35 ERA this season in 26.2 innings and has also made an occasional start as an opener going two or three innings. Miller was the Phillies' pitching representative at the MLB Futures game. His age could wind up being a prohibitive feature on the trade market.

Ortiz has been absolutely, positively red hot in July. In 16 games this month, the 23-year-old has hit .345. His power has been promising too, has he's blasted 13 homers this season. He does, however, strikeout a lot and plate discipline might be the last thing holding him from the majors. He is on the 40-man roster and if he isn't traded, he could make his big league debut this summer.

Perez is just 18 and was an international signing back in February. He nabbed a $1 million bonus as the second-best catcher in the international class. He's been revelatory as a young pro since being inked. He's hitting .396 through 18 games in rookie ball.

Lee signed last year out of Taiwan and could be a name to know as he rakes hitting in Single-A. The 19-year-old infielder is hitting .294 overall this season and he had a three-hit game on Friday.

Abel has struggled since being moved from Clearwater to Jersey Shore this season, in contrast to Painter. He's allowed eight runs combined in his most recent two starts and has a 4.25 ERA so far this season spread out over 54 total innings pitched. However, according to Sports Illustrated, "On paper, he hasn't been as impressive as his counterpart Painter, but his stuff is certainly on par, if not better." Perhaps a "Paint and Abel" one-two punch is inevitable.

Garcia, an international signee, has been as cold as ice lately in Single-A, hitting a dreadful .143 over 21 games in Jersey. The 21-year-old still has some time to develop, but he's mustered just four hits since July 13th.

Last year's third-round pick has struggled to start his pro career and is hitting .200 in rookie ball right now, with an ugly .128 mark over his last 10 games.

Jersey Shore's shortstop hasn't had much of an impact at the plate this season, as Martin has hit just .205. He is 23 and was a third round pick in 2020.

Ignoring the fact that this would have been Kendall Jenner's name had she stayed with Ben Simmons, the Phils 15th-best prospect has struggled since being drafted out of high school in 2018. He is hitting .206 in Clearwater this year and has a .221 average since turning pro. He does have some power which is why he remains in the top 15 — he has 30 homers in 197 total games.

Muzziotti remains in the top 20 and has made appearances both in MLB spring training and with the big club briefly, but he seems unable to break through on a team that is lacking in outfield depth. After hitting .143 during a nine-game stint in the majors, the 23-year-old is hitting just .194 in Reading.