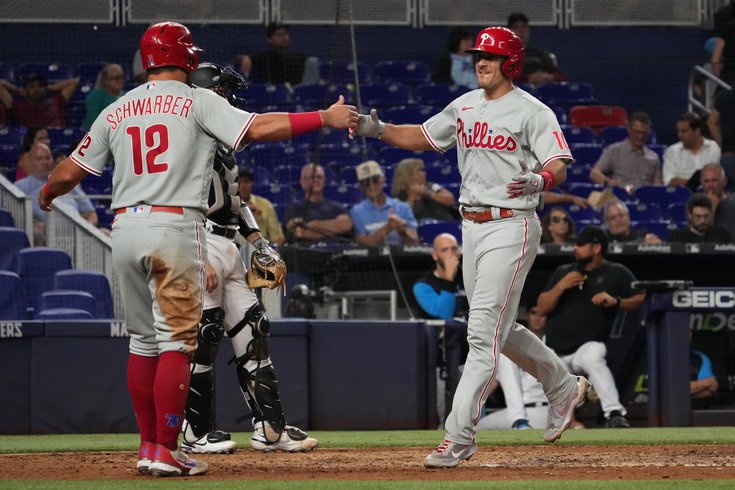 The Phillies didn't the World Series title, but some of the key cogs of that Red October are getting recognized for their big accomplishments in 2022. Phillies catcher J.T. Realmuto and outfielder Kyle Schwarber have both been named National League Silver Slugger Award winners.

The Silver Slugger Award recognizes the best offensive player at every position in both the NL and AL league with coaches and managers from each respective league voting on it. Realmuto previously won the award in 2019, his first season in Philadelphia. It was the third time a Phils catcher won the award with these two seasons from J.T. along with Darren Daulton in 1992.

The most recent Phillies player to win the award was just last year with Bryce Harper bringing it home during his MVP campaign. Schwarber is the fourth Phillies outfielder to win a Silver Slugger Award, joining Harper, Bobby Abreu in 2004 and Lenny Dykstra during the team's legendary 1993 season.

This is the first time the Phillies have had two Silver Slugger winners in the same season since Jimmy Rollins and Chase Utley in 2007.

Mike Schmidt is the team's all-time leader in Silver Slugger awards, winning six times. He won his first during the Phillies' 1980 World Series season, the first year the award was introduced.

With Harper perhaps missing less time due to injury than he did in 2022, plus the possible addition of a shortstop like Trea Turner, maybe the Phillies can double their amount of Silver Slugger winners in 2023.