Harper has been taking at-bats with a small UCL tear in his right elbow for months, but so long as there is no pain, the motion of his swing won't do any further damage 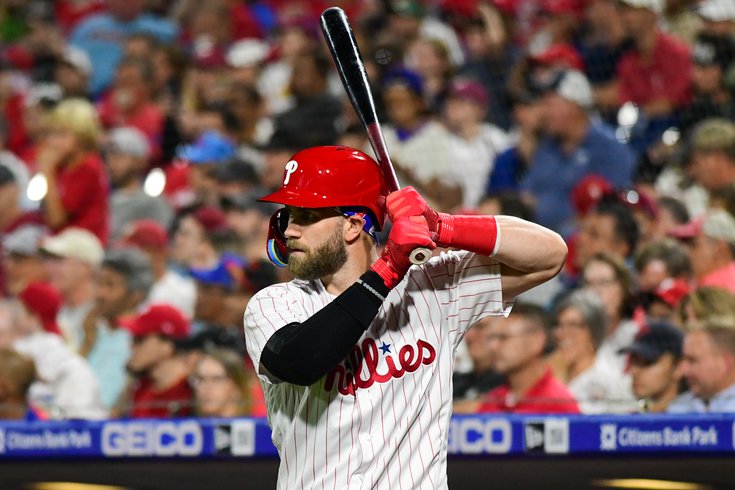 Bryce Harper at bat during the Phillies' game against the Toronto Blue Jays on September 20, 2022 at Citizens Bank Park.

Back on April 11 against the New York Mets, Bryce Harper made a throw to home plate then grabbed his right elbow in clear discomfort.

At first, the Phillies' MVP rightfielder tried to work through it, but the pain wasn't going away. Throwing a baseball became a bad idea.

Eventually, he settled into the designated hitter role and was later diagnosed with a small tear in his ulnar collateral ligament (UCL) on May 13, an injury that has since prevented him from throwing for the rest of the 2022 season.

But having only an NL MVP's bat is still better than having no MVP in the lineup at all, and Harper, even through a broken thumb, is still trying to hit the Phillies' way to the playoffs for the first time in a decade with all that in mind.

But why does his injury still allow him to swing a bat when he can't throw a baseball?

Dr. Christopher Selgrath, an orthopedic surgeon at Nazareth Hospital, broke that down.

"What happens is when you cock back in that throwing motion, you put a tremendous amount of pressure on that ulnar collateral ligament," Dr. Selgrath said in a phone interview on Tuesday. "Pitchers get it all the time. They're constantly throwing, so it tends to be a pitcher-related injury. But it's not uncommon for one of the fielders to get it also.

"That ulnar collateral ligament is responsible for providing stability to the inside part of the elbow...Ligaments hold bone to bone, so that ligament's job is to hold the two bones together in the elbow so that it doesn't get unstable. His ligament has a little tear in it, so that's going to cause him pain and you can make that small tear into a big tear if you repetitively throw. Pitchers keep throwing, eventually they'll tear the ulnar collateral ligament completely, hence Tommy John surgery."

Harper and the Phillies didn't want that. On May 17, the 29-year-old received a platelet-rich plasma injection and missed a handful of games before returning to the lineup. With the UCL injury being only a small tear, he and the club chose to try and let it heal naturally. The PRP injection was intended to speed up the process a bit.

The Phillies also elected to keep him away from throwing to prevent any further stress on the ligament. Swinging a bat though? That motion doesn't tax the UCL nearly as much. So as long as Harper isn't feeling any pain in his elbow at the plate, Selgrath explained, he can keep going as no further damage is being caused.

"It's not the same stress on that ligament," Selgrath said. "The batting motion doesn't provide or produce a significant amount of stress on that ulnar collateral ligament, so he can do that. The problem is if he plays the field and has to keep throwing. That's going to cause continued stress on that ligament. That's the big difference between why he can bat and why he can't throw. It's where the ligament is used and how it's constructed and what stress is on it with different activities." 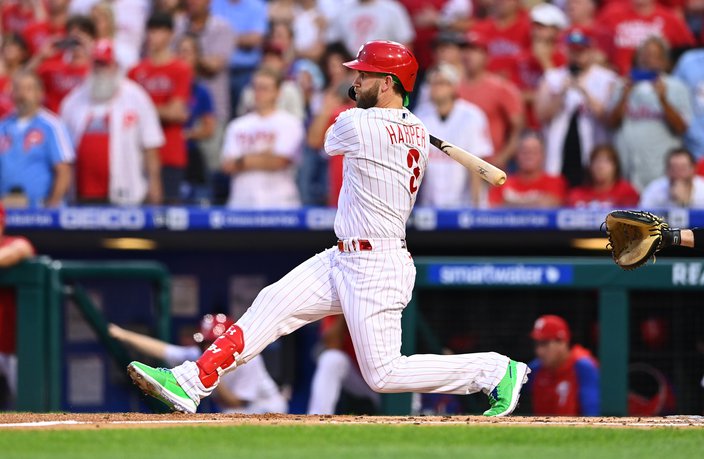 The catch is that Harper was fully shut down for around two months earlier in the summer because of his broken thumb suffered on June 25 in San Diego. As he began working his way back in late July-early August, Harper actually did begin throwing again, which sparked hope that he wouldn't just return to the plate in a late-season playoff push, but maybe even right field again too.

Harper, however, felt stiffness in the injured elbow, which led the Phillies to ease off his throwing program, going back to the initial plan of keeping him as a DH the rest of the way. And that he still felt stiffness was a concern to Selgrath that may linger into next season. 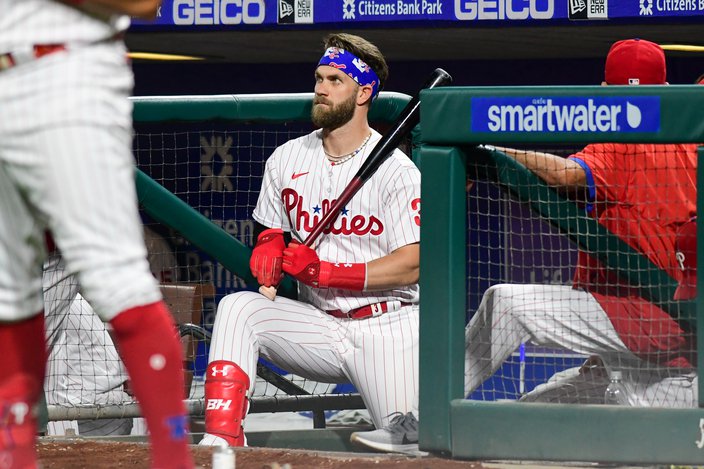 Bryce Harper stands by in the Phillies' dugout.

During his rehab assignment with Triple-A Lehigh Valley on August 23, Harper said offseason surgery wasn't in the cards. Most injuries usually take around 6-8 weeks to fully heal, and there will be a few months in the offseason to try and let the UCL fully and naturally heal again.

But Harper did commit to Team USA for the World Baseball Classic as an outfielder in March, and even with the downtime from the broken thumb in the summer, he still came back with symptoms from the tear.

Any surgery, for now, would be preventative so long as it's a partial tear and take upward of a year to recover from, plus Selgrath noted that you always run the risk of complications. The conservative approach, meanwhile, could let the ligament fully heal but runs the risk of sending Harper and the Phillies back to square one once he tries to throw again.

Selgrath said he could see conversations on what to do next very well happening once the season's over, whenever it's over.

"They're just in a tough spot because it boils down to you got a partial tear that continues to remain symptomatic," Selgrath said. "If it was you, me, or someone else, you wouldn't have surgery most likely because you're not a high-end athlete playing baseball, which stresses your ulnar collateral ligament. You play tennis on the weekends, you play pickleball or whatever, you're probably going to get away with it. The problem is can he get away with it? Can he limp through this non-operative approach and conservative treatment, the PRP injection, and shutting it down every now and then, and not throwing the ball. Does that get you through?

"I think it makes perfect sense for the season, the question is what do you do in the offseason? Do you say 'Okay, we're going to do another year of that before you decide on trying to fix this thing because we know that's what seems to be symptomatic?' That's going to be one of the approaches. The other would be 'Okay, well we don't want to do that again but we're going to jump in and do surgery even though it's not completely torn with the idea that we think that's going to be the reason it gets better,' hence the reason for the conversation. It's a little bit of a rock and a hard place."

*DISCLAIMER: The views and opinions expressed in this article are those of the author and guest authors and do not reflect any official policy or position of any MLB team or a team's athletic physicians.