And a note on Lee Thomas, the general manager for the '93 team who passed away at 86 on Wednesday 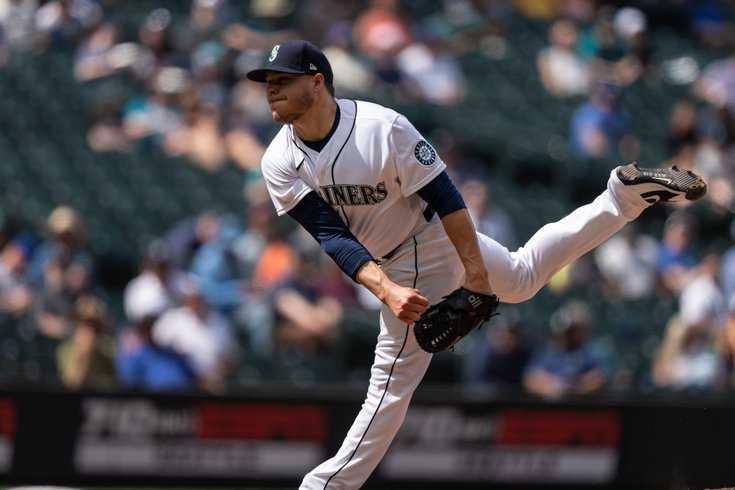 With Seranthony Domínguez still on the shelf and the deadline for postseason eligibility looming, the Phillies added one more bullpen arm for the home stretch of the season on Wednesday.

The deal was first reported by ESPN's Jeff Passan then announced by the Phillies shortly after. Nittoli, who hasn't pitched in the majors this season, is expected to join the club once the rosters expand on September 1 and will be in the bullpen when it begins its three-game set out in San Francisco the next day.

His major-league experience, however, is an extremely small sample size as he pitched just one inning for the Seattle Mariners last summer on June 23, 2021 against Colorado. Trevor Story, still with the Rockies, tagged him for a two-run homer in what went on to be a 5-2 Mariners loss.

The Phillies will look to Nittoli to help try and get them by until Domínguez can return from the injured list (tricep tightness), possibly Zach Eflin too as he threw a bullpen session on Tuesday trying to work his way back from a knee injury.

Working with the benefit of an easy schedule the past couple of weeks, the Phillies have been playing incredible baseball in the chase to lock down a postseason berth, but they hit a brutal rough patch in Arizona, having dropped the last two games to the Diamondbacks by a combined score of 25-10.

They'll try and salvage a game out of the series in the finale Wednesday night before leaving for San Francisco to begin the final month of the regular season.

Looking ahead to next season, MLB released the 2023 spring training schedule. The Phillies will get started on Feb. 25 with split-squad matchups against the Yankees at home in Clearwater and Detroit on the road in Lakeland.

The 32-game slate will wrap up with a home-and-home set against Toronto March 27-28, then the Phils will leave for Texas for the March 30 season opener to start a drastically rebalanced regular season schedule.

It'll be a full spring training after the lockout ate into things this year, but the World Baseball Classic will also be going on throughout, which J.T. Realmuto and Bryce Harper have already committed to Team USA for.

Check out the full spring training schedule below via MLB.com's Todd Zolecki:

A sad one to cap this off.

Thomas was the architect of the 1993 team that went from worst to first on the way to the NL pennant, headlined by the likes of John Kruk, Terry Mulholland, Curt Schilling, Lenny Dykstra, Milt Thompson, and Danny Jackson, who were all trade acquisitions or free-agent signings in the leadup to the miracle run.

He also drafted Scott Rolen, who starred at third base for the team from 1996-2002 until he was dealt to St. Louis.

“Lee was a great man and will be missed incredibly,” Phillies Chairman Emeritus Bill Giles said in a statement released by the club. “I will never forget all the fun we had watching the 1993 Phillies National League championship team that he put together. Through his leadership, Lee has left an indelible mark on Phillies history. My love goes out to his wife Susie and his entire family."

A native of St. Louis, Thomas played eight seasons and more than 1,000 games in the majors – with the Yankees, Angels, Red Sox, Braves, Cubs, and Astros – from 1961-1968 before wrapping up his career in the Cardinals' minor league system.

From there, he transitioned into coaching and then eventually the Cardinals' front office, climbing the ranks into the club's director of player development until the Phillies came calling in 1988.

Thomas is survived by his wife Susie and his sons Matthew, Scott, Deron, and Daryl.

A few reactions to Thomas' passing from former players and local and national media members:

So sorry to hear the news regarding the loss of Mr. Lee Thomas. Lee brought me to the Phillies at the end of ‘91 and changed my life and career trajectory forever. I owe a great deal to you, Lee. God bless the Thomas family. You will be missed. RIP. 🙏🏽🙏🏽

Former Phillies general manager Lee Thomas, architect of all those great 1993 memories, has passed away. Wonderful person and baseball man. Blessed to have known and covered him. Condolences to his loved ones.

So sorry to hear about the passing of Lee Thomas.

Had so much passion for baseball and life. Assembled one of the most fun Phillies teams ever. Loved talking about any baseball topic on anyone's mind. Put a smile on so many faces.

I feel lucky I got to know him and his family. https://t.co/mTqFzoofaA

Lee Thomas was always the most accessible and congenial of GMs. Built one of the most colorful and successful teams of the era. RIP. https://t.co/fYTAv0VDds