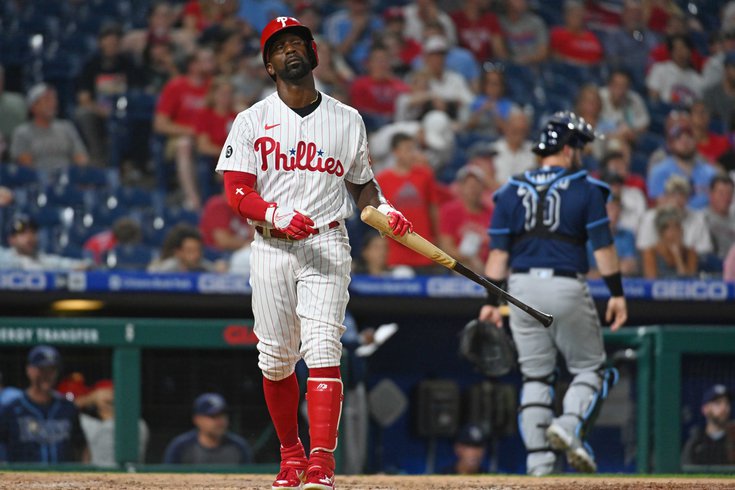 The Phillies hitting has cost them the NL East lead.

It was two weeks ago.

The Phillies swept the Mets, seized first place in the NL East deep into the summer and with one of the best offenses in baseball, it felt a little bit like 2008 again.

But it's quickly reverted back to 2012. Or 2015. Or 2020. Or really any season over the last decade at Citizens Bank Park, where the Phillies spent a ton of money to finish somewhere near the .500 mark and miss the postseason each and every time.

With a 63-62 record and 4.5 game deficit in the division — trailing the red-hot Braves — the optimism has all but evaporated.

It's far from over. There are 37 games left and after the Phillies finish their series against the Rays on Wednesday, they'll face the Diamondbacks (.331 win percentage) four times, the Nationals (.435) six times and the Marlins (.405) six times before things get tough again with Brewers on their upcoming schedule.

"I've said it all along, we've got win games," Bryce Harper said after Tuesday's 3-1 loss, on a night the Braves lost too. "It doesn't matter what the other teams are doing or anything like that. A lot of teams in our division tonight are going to lose and we lost also. If we're not winning games, we aren't where we need to be. We have to pick up our offense — our pitching is throwing really well right now."

If they can keep it close, perhaps tighten the gap by a few games over the text two weeks, the hope will still be alive. But if you have watched the Phillies offense of late, the hope looks like it struck out — or grounded out weakly to shortstop.

While the Phillies pitching hasn't shocked the world by any means, they are not to blame for the team's struggles. Their 4.10 ERA over the last 12 games is the 12th best in the majors, and they also have a top 10 WHIP, and have allowed the fourth fewest homers of late. They've kept the Phillies in games.

It's the Phillies hitters who have fallen asleep on the job, combining to hit .187, lowering their entire season average to .237. In a span that has seen them go 4-9, the Phils have generated 2.8 runs per game. If they had simply scored four measly runs per game in the last 13, they'd have gone 8-5 and would be just a half game behind Atlanta.

Their offense hasn't just been bad, it's been the absolute worst in baseball since August 10th and it really isn't even close:

That BABIP number is worth mentioning, as the Phillies have been victims of some pretty bad luck. On the season, their batting average on balls in play is .287, so you can see they are making outs right now that they don't usually make. Both of those marks are considerably lower than the MLB average of .292 this season.

No one seems to be immune from the current slump, with MVP hopeful Bryce Harper also dropping off, hitting .211 himself over the above span of games. Only Odubel Herrera, of Philly's regulars, has hit above .235 over this stretch of futility.

Two of the five best hitters on the team, by average, have been pitchers Ranger Suarez and Aaron Nola.

"It doesn't matter where it comes from," manager Joe Girardi said Tuesday. "There are eight guys in the lineup, and even our pitchers have had some big hits lately. It can't be one guy, it can't be two guys. It's collectively a group that needs to get it rolling."

In the aftermath of the Phillies' horrible play, their one-time top prospect Alec Bohm has been sent down to Triple-A, and the front office fired some of the key decision-makers on the player development side.

Clearly the team is feeling the heat, and while the schedule will do the best it can to make things easy for the Phillies — with just six games remaining against teams with winning records after they finish the Rays' series — none of it will matter if the offense continues to sleep on the job.