Kevin Cooney: Playoffs are the goal, but hardly the only measuring stick for Phillies

Ending the postseason drought would be nice, but it's more important the team plays well down the stretch. Otherwise, it might be time to blow it all up... 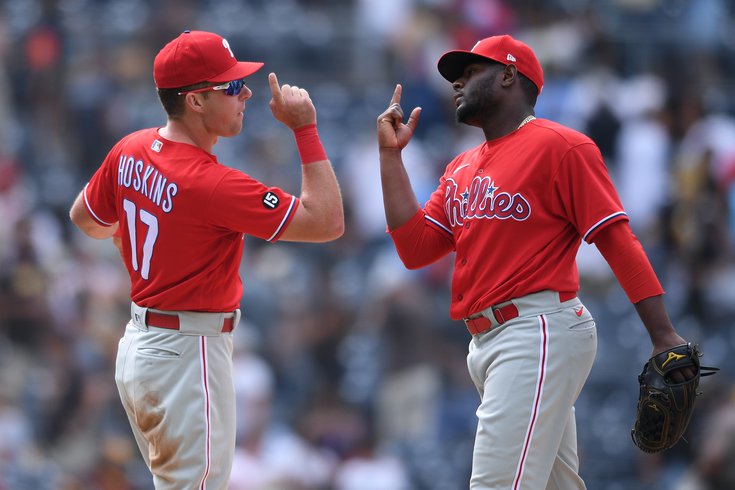 Philadelphia Phillies first baseman Rhys Hoskins and relief pitcher Hector Neris after their win over the Padres on Sunday.

A decade away from the dinner table of October baseball can leave a fan and a franchise starving for the immediate satisfaction that a playoff appearance can produce.

But put that to the side for just six more weeks, because making the 2021 tournament can’t be the only way you judge this edition of the Phillies.

Should they fail to make the playoffs, this team’s cause of death will be listed as one word: Arizona. The sweep at the hands of the Diamondbacks — combined with the Braves ability to take care of business on the Nationals, Marlins and Orioles — has created a deficit that may just be too much for this group to overcome.

And that’s why it is so important to not ultimately judge the Phillies by the playoff appearance. If it happens, great. But if it doesn’t, then there has to be another standard by which to judge where this Phillies team stands. And ultimately, what this team has to be judged on is how they play down the stretch — not whether they pass the Braves.

Again, I completely understand this is not easy to hear when you’ve missed the playoffs for a decade. It isn’t meant as a participation trophy either. No, it is taking an overall status look at the shape of the franchise and where it has to go moving forward.

Look, everyone has seen the schedule moving forward. Yes, it stinks. Only the Rays, Brewers and Braves remain that are currently above .500. That’s eight out of the 38 games remaining. Realistically, a 24-14 finish is possible if the Phillies play well down the stretch with the bulk of those bottom feeder games — Arizona, Colorado, Pittsburgh and Baltimore — at home where Philadelphia is a much better team. That would get the Phils to 87 wins — clearly a high water mark since the 2011 season.

Still, the Braves would only need to go 20-18 to get to 88 wins and earn the division title. And while the Braves schedule is harder than the Phillies — six games against the Giants, two against the Yankees and road series against the Dodgers and Padres — Atlanta does have 20 games against under-.500 teams in the Rockies, Nationals, Marlins and Mets with a great majority of them at home. It's part of the reason why the Braves are a solid -430 to win the division at FanDuel, according to Pickswise, while the Phillies, who still have the second best odds, are quite a ways back at +450.

Could an 87-win campaign get the Phillies into a wild-card spot? That certainly seems more feasible than it did two weeks ago with the Padres in full retreat mode. The Phillies are five games behind Cincinnati, who has the second wild card at this point. But the Reds schedule — filled with Pirates, Tigers and Cubs games — would likely prevent a serious move.

So if the division is such a long shot and the wild card is unlikely, what is it that the Phillies really have to play for? Well, it should be declared that the rest of this season is about jobs and this core unit’s future.

If this team goes belly-up, it should make the decision fairly easy for Dave Dombrowski and Sam Fuld. A fourth straight collapse should usher in a ton of change on this roster with few being secured – Bryce Harper, Zack Wheeler and J.T. Realmuto probably being the only sure bet given to return.

Some of the changes are going to take place no matter what. Odubel Herrera won’t be back, Andrew McCutchen is a long shot without a pay cut, the third base mess would have to be cleared up.

But if the Phillies play well and finish just short, what do you do then? Can you blow it up at that point when you arguably played much better ball in the second half of the year at that rate?

Do you look at the time Rhys Hoskins was out and say that’s proof of just how valuable he was to the entire situation? Does Aaron Nola’s 2021 get viewed as a momentary blip which could be corrected? Do you reconsider what Alec Bohm’s future with the franchise will be with a free agent class potentially out there of possible replacements?

The playoffs are still the main goal and it should be the main focus. But the storylines for September with this team should go well beyond just that one power point. And only until we get to the end of next month can we truly evaluate what the state of the franchise really is.