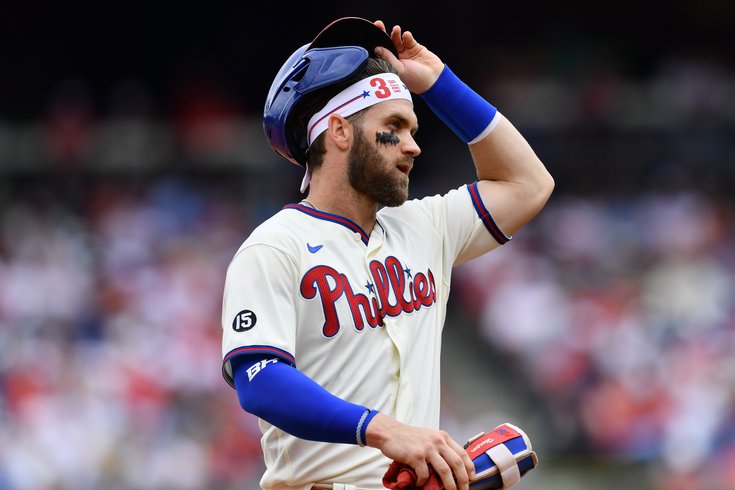 No, Bryce Harper isn't the Phillies' problem. But he certainly knows what is — and that there's no easy way to fix it.

Bryce Harper should be, and is, in the MVP conversation.

It's his best season since he won his only MVP award in 2015, as he is currently slashing .297/.415/.574. His .415 on-base percentage is the second best in baseball, and his 22 homers are a more-than-respectable number, considering he's only played in 98 of Philadelphia's 119 games. He also has the longest active on-base streak in baseball at 22 straight games.

According to various betting outlets, Harper is the second most likely NL player to win the MVP award, at +475 odds from DraftKings, via Pickswise.

However, somewhat peculiarly, Harper had only 49 RBI on his 100 hits (48 of them for extra bases). For some contrast, Minnesota's Miguel Sano also has 49 RBI — on 70 hits. And Cleveland's Jose Ramirez, who has the same 100 hits, with exactly one more for extra bases, has 73 RBI.

Harper has hit third in the Phillies lineup 83 times this year, with the other at-bats coming in the cleanup spot. With the Phillies trailing the Braves by 2.5 games in the NL East and sporting 15 losses in one-run games this season, one has to imagine that a more typical RBI output by Harper could literally be the difference between making the playoffs or finishing the year with another near .500 record and having nothing to show for it.

So why is he so far behind the pace of his 114 RBI season just two years ago in Philly, a campaign that saw him drive those runs in on 149 hits?

Well, he's not getting much help.

Whether you blame manager Joe Girardi for not putting the right pieces ahead of Harper, or those players for not being in the right place at the right time, the Phils have a leadoff problem. Players batting in the first position this season have hit for a mundane .219 average (as of Tuesday), getting on base at a .294 rate — substantially worse than the league average of .317. The two-hole is not much better, hitting .243 this year.

As a result of that, and other factors, 20 of Harper's 22 homers have been solo shots. Which is really crazy to think about.

Jean Segura and Andrew McCutchen on the other hand have been better, scoring 40 runs in their 328 plate appearances which is, better — they have an on-base rate above .300 (which the aforementioned hitters do not), but it's still below the league average.

Harper has certainly done his job, leading the Phillies with 68 runs scored as they experience a power outage themselves — hitting 139 total homers, only good for 18th of 30 teams.

"Whenever you're hitting homers you're hopefully winning games," Harper said on the recent dip in power at-bats. "You just have to have good at bats and put the bat on the ball. We haven't been able to do that the last couple of days we haven't scored too many runs."

It might not matter how spectacular Harper plays in the season's last 43 games if he continues to hit solo shots, or finds himself stranded on base. With some key players slated to come off the injured list in the coming days, like Rhys Hoskins, Freddy Galvis and Zach Eflin, the Phils will have no excuses not to pulverize their competition with the league's easiest schedule (by far) down the stretch.

Baseball is an individual team sport, but no one can win an MVP award completely on their own. The Phillies better give him some help soon, or they could waste their best chance of ending their decade-long postseason slump.