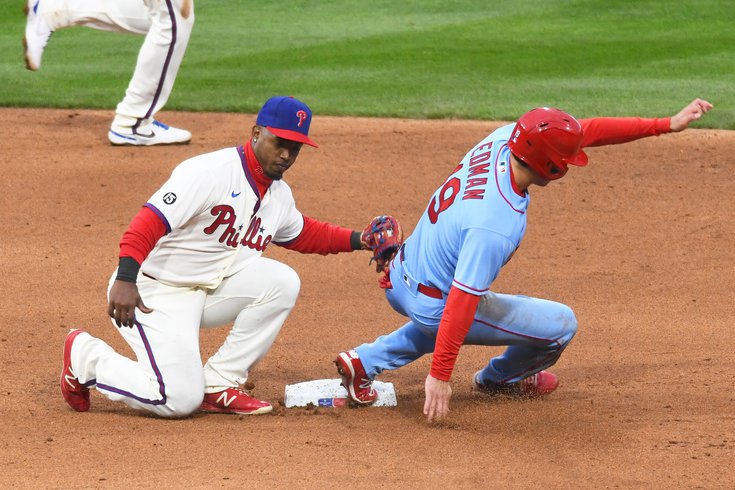 PHILADELPHIA, PA - APRIL 17: Jean Segura #2 of the Philadelphia Phillies tags Tommy Edman #19 of the St. Louis Cardinals out during the game on April 17, 2021 at Citizens Bank Park in Philadelphia.

If someone told you in March that the Phillies — a quarter of the way through the 2021 season — would be a game over .500, in second place in the NL East and boasting one of the top trios of starting pitchers in baseball, would you take it as a success?

If they expanded on their prediction and said that the bullpen, the fifth starting pitcher, the defense and many of the hitters would be atrocious, would that make you tune the team out so you could better enjoy your spring?

Expectations were low this offseason, with many expecting the Braves, Mets and Nationals to battle it out for the division. Philly has been right there with them for most of the year, currently sitting just a half-game back of New York for first place.

So far this season, the Phillies have been inconsistent and predictable, looking at times like a team that could make a serious playoff run and others like one that will be playing meaningless games before the Eagles even see the field this fall.

It is interesting, and painfully true, that the Phillies seem to be both over and underachieving this season, and are simply unable to get on the same page (much like Joe Girardi and Jean Segura on Sunday afternoon). Here are a handful reasons why Phillies fans should be optimistic, as well as fatalistic, as the season continues:

The Phillies regulars are having pretty good offensive seasons so far, with Bryce Harper turning in MVP-type numbers, hitting .307 and on a 30-homer and 100-walk pace. Andrew McCutchen started slow but has had a red-hot month of May, hitting .302/.424/.623 with five homers. J.T. Realmuto is hitting .294 and looks like a sure All-Star.

The issue there is that all three have been banged up at some point this season, with Realmuto and Harper currently fighting to stay off the injured list. Rhys Hoskins and Jean Segura have also been pretty reliable with the bat, and if the five regulars mentioned here keep their offensive production where it is for the rest of the season, they should score enough runs to stay competitive.

Having most of the lineup hitting to their ability is a win and overachievement for sure. And with so many injuries, not just to these players but up and down the roster, being above .500 — in the NL East — is actually an impressive feat.

We've already covered how dominant and valuable the Phillies rotation trio of Aaron Nola, Zack Wheeler and Zach Eflin have been to the team. They are innings eaters, slump busters and Cy Young candidates, with even their worst outings being winnable games for an offense that has the ability to score runs. Add in a surprisingly successful substitute starting job for Vince Velasquez and you have a combined 3.37 ERA for everyone not named Chase Anderson (who has a putrid 6.96 ERA as the fifth starter).

Even including their fifth starter, the Phillies have gotten 228 innings from their rotation arms, the fourth most of all 30 MLB teams and just two-thirds of an inning behind the Dodgers for the top spot. Their bullpen is weak but the Phillies are alleviating the impact of that by getting their starters deep into games. They have a rotation that could be a force to be reckoned with if they do make it to postseason play.

Pretty much out of nowhere (and desperation), the 24-year-old and recent seventh round draft pick Maton has the second best batting average of any Phillie this season and appears to be an everyday player for Girardi this season. He's an infielder by trade and got his big break filling in for Segura when the latter was injured earlier this spring. Maton has been so good that the Phils have tossed around the idea of having him play centerfield just to keep his bat in the lineup.

However, that hasn't had to happen yet because of...

After Herrera's fall from grace for domestic violence issues a few seasons ago, it's remarkable that he's pretty much become an everyday player again. But after awful showings from Roman Quinn, Adam Haseley and Mickey Moniak, the Phillies had no choice but to give Herrera a shot. After a very slow start, he's reliable and clutch with the bat. It's a little uncomfortable, to be sure, but having an answer in center, for now at least, is an achievement based on where this team was at the start of the year.

The Phillies' biggest weakness this season is probably their lack of fundamentals — which includes being aware of in-game situations, running the bases properly and communicating on defense. Routine defensive plays for the other 29 teams are anything but with the Phillies, and it's hard not to look at these short-comings as a reflection of the manager.

Girardi has made some questionable decisions with the bullpen and pitching staff, and has also not been particularly great at gamely decision-making and using the bench in key spots this season. He also is clearly frustrated, as he got in a minor altercation with Segura in the dugout Sunday.

Sunday's wild 10-8 loss to the Blue Jays is probably the season in a nutshell, and Girardi got himself into even more of a mess when an injured Scott Kingery had to exit, and the skipper elected to put Harper — nursing a shoulder injury — into the lineup while hurt because there were no other bench options. Of course, Harper was up in the ninth, with two runners on and two out with the game on the line, obviously feeling discomfort or pain.

Girardi was in a tough spot Sunday due to some pretty awful decisions made by...

Sunday, Harper, Realmuto, Didi Gregorius and Andrew Knapp (a late scratch) were hurt. That's essentially an entire bench's worth of players — and Dave Dombrowski did nothing to help. Predictably, the Phillies wound up losing a game they almost came back to win due to being ill-prepared with so many unhealthy players on the roster.

Will Dombrowski continue to sit on his hands as Anderson sucks it up as the fifth starter? The front office also seems completely overwhelmed by injuries, which could be preventable after having such a weird season in 2020. There are very few contingency plans for hurt players and the depth of this team could wind up being its undoing.

Philadelphia's relief pitchers have blown nine of 20 save opportunities this year. They have allowed 49% of inherited runners to score (second worst in baseball). The ERA of the bullpen is 4.26, but the team ranking 20th in the league and not worse is because of excellent work from Hector Neris, Sam Coonrod and Jose Alvarado. Philly has sent 15 different relievers to the hill this season, and nine of them have an ERA above 5.

The pen is a huge issue, and while it is better than it was last year, it's a very low bar to cross. The pen is simply underachieving.

Anyone who wears a glove

The Phillies' defense is toward the bottom of the majors in nearly every single category, both via advanced analytics and traditional metrics, as well as the eye test. Giving the opposition extra outs is not a sound way to win ballgames.

After making three errors in a loss Saturday, Segura made two more Sunday leading to the aforementioned spat in the dugout where Girardi looked to be saying "catch the ball."

Here's more on the defense and Girardi from NBC Sports Philly's Jim Salisbury:

Girardi can't do it for his players.

But, when they don't do it, time and time again, over and over, it reflects poorly on him. Bad baseball optics.

Girardi was supposed to be the taskmaster that would sharpen up a country club team and prevent September collapses. [NBCSP]

At this rate, they may collapse before September.