Full-capacity crowds, tailgating at Phillies games to resume in June 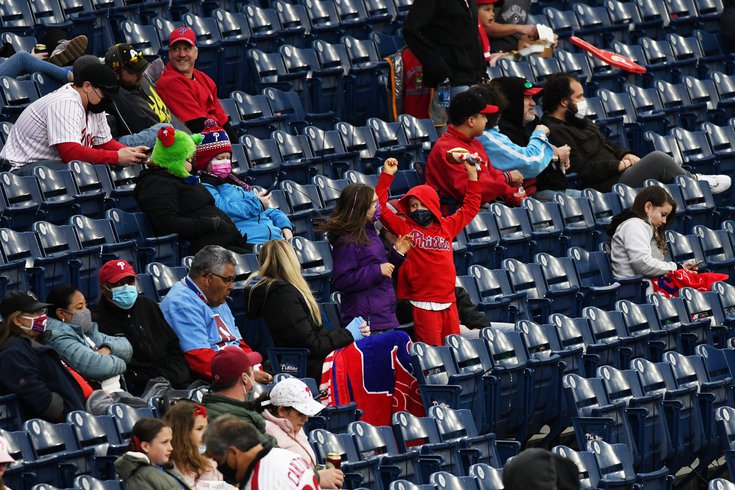 Citizens Bank Park has not been allowed to host a full capacity crowd for Phillies games since September 2019.

Starting next month, the Phillies will be allowed to host as many fans at games as they wish for the first time since the onset of the COVID-19 pandemic.

Citizens Bank Park will reopen to full capacity crowds beginning June 12 when the Phillies host the New York Yankees in South Philly, the team said Thursday. Tailgating will be permitted in parking lots surrounding the ballpark.

But before the Phillies relax all COVID-19 capacity restrictions, the team will increase its current occupancy limit from 11,000 fans to 16,000 spectators starting May 21 against the Boston Red Sox.

A limited number of sections that enforce social distancing will remain available for fans who want more space. Face coverings will still be required at all times when not eating or drinking.

Tickets are on sale for games through June 10. Tickets for all remaining games this season will be available starting May 25.

The Phillies haven't played in front of a full capacity ballpark since September 2019. Citizens Bank Park holds 43,647 fans at full capacity, but the team has only been permitted to allow 25% occupancy since early April.

"This is a very exciting time in the city of Philadelphia as we begin to return to some sense of normalcy," Phillies executive vice president David Buck said. "There is nothing better than the energy and enthusiasm that Phillies fans bring to Citizens Bank Park. We look forward to welcoming even more fans back to enjoy the ballpark experience."

The Phillies' announcement comes just two days after Philadelphia said that it will end its COVID-19 restrictions in a two-stage process.

The city will take an intermediate step on May 21, when outdoor venues with fixed seating and indoor gatherings will be allowed to increase capacity to 50%. All of Philly's COVID-19 restrictions, including capacity limits at outdoor and indoor venues for sporting events and concerts, will cease June 11.

The city's face mask mandate remains in place, but social distancing requirements will reduce from six to three feet.

The Phillies are not the only professional sports team in the region easing capacity limits in the coming weeks.

The Sixers will increase occupancy to 50% at Wells Fargo Center starting May 21 as the team begins the first round of the NBA playoffs. The team will reopen to full capacity crowds for games on June 11 if the 76ers are still alive in the playoffs.

The Sixers haven't played in front of a full arena since March 2020, just before the COVID-19 pandemic began. Wells Fargo Center holds 20,155 spectators at full capacity, but has only been permitted to operate at 20% occupancy since early April.

"Our fans have created the most passionate and intense atmosphere in the NBA and it gives us the type of home court advantage our players can feed off in the postseason," Sixers president of business operations Chris Heck said. "We hope this is only the beginning and look forward to welcoming back even more fans throughout the playoffs."

Fans will have to continue wearing face masks except when eating or drinking. Designated portions of sections will remain socially distanced for fans who want more space.

Group and single game tickets, as well as suites, will be available to the general public beginning May 21. The experience is contact-free: only mobile tickets and parking passes are available, and concessions can only be purchased with a debit or credit card.

The Union haven't played in front of a full stadium since October 2019.

"Philadelphia Union fans are the backbone of this organization and we cannot wait to welcome back all fans and the electricity they bring," Philadelphia Union president Tim McDermott said. "The cheers, energy, and devotion our fans and the Sons of Ben bring to a home match are incredibly special and absolutely motivate our team. We are truly excited for the Philadelphia fans who have waited for this moment for over a year."

The Union's announcement comes after Pennsylvania said it will relax all of its COVID-19 restrictions on May 31, including all capacity limits at outdoor and indoor venues for sporting events and concerts.

Pennsylvania's occupancy limits have stood at 25% for indoor events and 50% for outdoor gatherings since early April.

Starting Monday, capacity limits will increase to 50% for indoor gatherings and 75% for outdoor events before all restrictions are lifted Memorial Day.