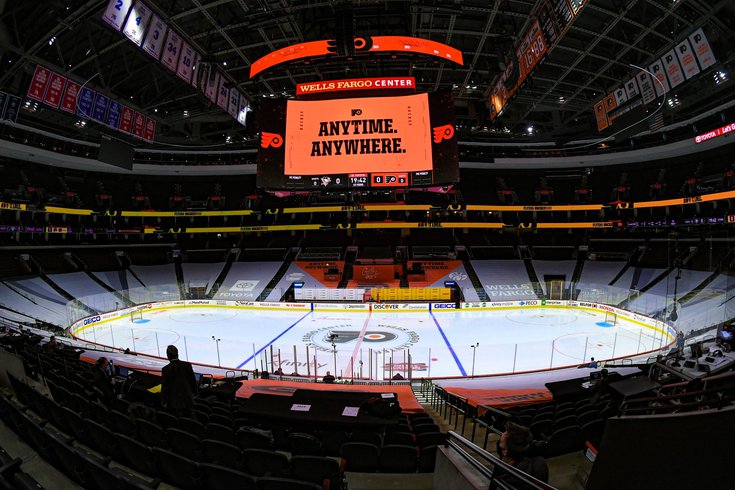 The Flyers will be permitted to have about 4,000 fans in attendance Tuesday night when they host the Boston Bruins at the Wells Fargo Center.

The latest guidelines, which took effect Sunday, permit Citizens Bank Park to increase its occupancy limit from 20% to 25% and the Wells Fargo Center to raise its capacity restriction from 15% to 20%.

The capacity limits include both on-site vendors and staff, city officials said.

Under the city's previous guidelines, the Phillies were allowed to have about 8,800 spectators for their first two home games of the season. With the new limit in place, the Phillies hosted 10,773 fans Sunday for their win against the Atlanta Braves. Citizens Bank Park holds 43,647 fans at full capacity.

The Flyers and Sixers previously were permitted to have about 3,100 spectators at home games. Roughly 4,100 fans were in attendance for the Sixers' loss to the Memphis Grizzlies on Sunday night. The Wells Fargo Center holds 20,155 spectators at full capacity.

The first Flyers game under the new occupancy limit is Tuesday against the Boston Bruins.

Fans at both venues are required to follow social distancing rules and wear face masks at all times, except when eating or drinking at their seats.

Tickets to attend the Phillies' first 19 home games initially were offered to season ticket holders before opening to the general public. All tickets are  mobile and only available for purchase online. Tickets for the Phillies' remaining 62 home games are expected to go on sale soon.

Tickets to Flyers games have been prioritized for "Inside Edge" season ticket members. Others who are interested can fill out a form to be put on a wait list.

Information about obtaining tickets to Sixers games can be accessed on the team's website.

Philadelphia's decision to amend capacity restrictions for both venues came as Pennsylvania drastically relaxed limits on attendees at indoor and outdoor events.

On Sunday, indoor venues across the state were permitted to increase their occupancy limits from 15% to 25%. Outdoor spaces were given the green light to raise capacity restrictions from 20% to 50%.

Philadelphia did not follow suit, citing a recent uptick in COVID-19 cases and hospitalizations across the city. City officials said that Philly would not align itself with Pennsylvania's latest guidelines until at least April 30.