Philly will not ease COVID-19 capacity limits on restaurants, bars, other venues until at least April 30 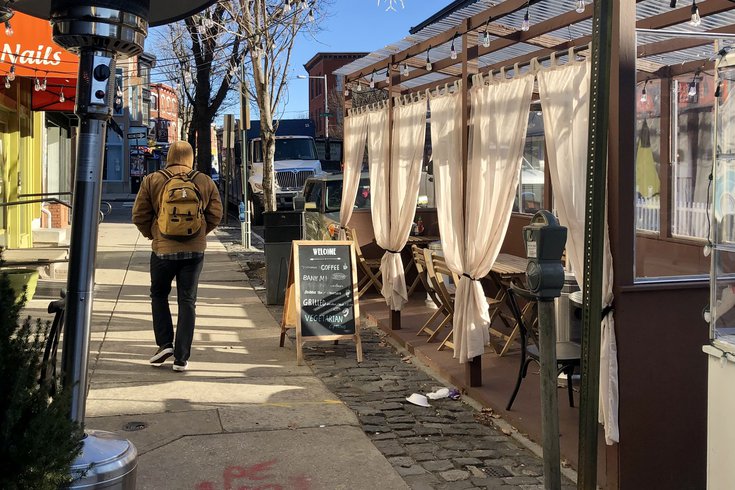 Philadelphia said it will not ease COVID-19 restrictions on restaurants and other businesses until at least April 30. The rest of Pennsylvania plans to expand indoor dining and allow bar service starting April 4. Outdoor seating outside a restaurant on Main Street in Manayunk is shown above.

Because Philadelphia is seeing a steady increase in new cases of COVID-19 – and, recently, an uptick in hospitalizations – city officials said Tuesday they will not be further relaxing COVID-19 restrictions on restaurants and large outdoor events when the rest of Pennsylvania does so in less than two weeks.

Pennsylvania will ease several restrictions on Sunday, April 4, Gov. Tom Wolf said last week. The state's new guidelines will allow indoor dining to be increased to 75% capacity and the resumption of bar service. Personal service facilities, gyms and entertainment facilities, such as casinos, theaters and malls, will be permitted to operate at 75% capacities, the maximum occupancy limits for indoor events will increase from 15% to 25%, and for outdoor events, the occupancy limit will increase from 20% to 50%.

Philadelphia, despite progress being made getting people in the city vaccinated, will not make those changes before April 30.

"We believe that those changes, if we adopted them here in the city of Philadelphia, could further increase rates of cases and hospitalizations — and deaths," Farley said. "We do think the vaccination can dampen the epidemic, but vaccination coverage is not high enough yet to have a substantial impact on that."

There are a few exceptions the health department has decided can move forward on April 4.

Low-risk hotel business meetings will be permitted to have food served and outdoor catered events will be allowed to expand to up to 250 people, with restrictions.

"This is to encourage people who want to have their social events anyway to do them outside now when the weather is better," Farley said.

Philadelphia restaurants were permitted to operate at 50% capacity beginning in February. Later that month, the city eased the limits on the number of people allowed at indoor and outdoor venues, and in early March, the city approved a plan that allows some fans to attend games at the Wells Fargo Center and Citizens Bank Park.

There are 318 patients hospitalized with COVID-19 in Philadelphia, up from 203 on March 7.

Farley said there is not one explanation for the rising rate of coronavirus infections in Philadelphia, though he said in recent weeks that he had become concerned about complacency setting in across the city and region.

"It's pretty broad spread," Farley said. "The only thing I've noted is that the areas that are being hit the hardest now are the areas where the virus first hit hard a year ago when it first arrived in this country. I don't know if that means that those areas are where variants are arriving now or this is (that) the partial immunity that happened from that wave has waned and so now we're more susceptible than other parts of the country."