John McMullen: Eagles maximized value — and stuck to team philosophy — by trading back in draft 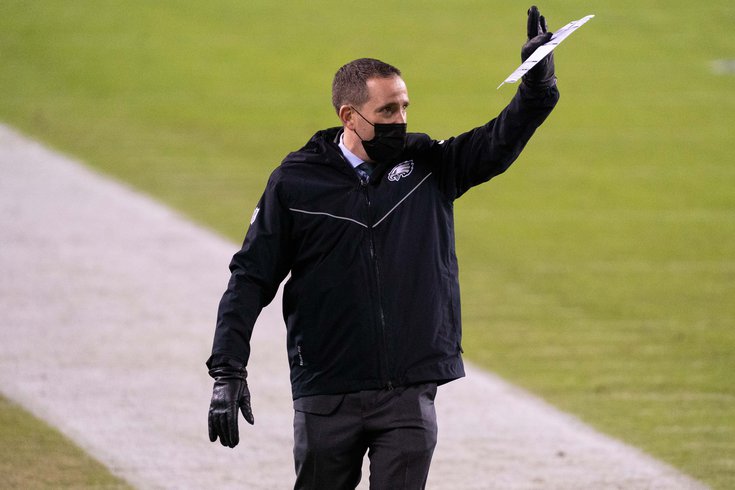 If you boil it down there are only a few reasons why Howie Roseman and the Philadelphia Eagles felt comfortable enough to move down in the first round of the upcoming NFL Draft.

A workshopped interest in Zach Wilson was quickly batted down with a Dikembe Mutombo-like finger wag, perhaps an Eagles' evolution to the understanding that there is a human aspect to treating people as assets in the shadow of the Carson Wentz wreckage. Philadelphia is certainly interested in Wilson as a player but there was no path to him before the step back.

There’s also a school of thought that “generational talent” at the skill positions like Kyle Pitts and Ja’Marr Chase wouldn’t be there at No. 6 if Atlanta and Cincinnati take those avenues, the latter reuniting the famed LSU connection of Joe Burrow to Chase.

And then there’s the Occam’s Razor tea leaf — the simplest answer is usually the correct one.

Last week in this space we explained to you that the DNA of Jeffrey Lurie’s Eagles traces back to 1999 and the arrival of Andy Reid.

In Reid’s head-coaching interview with Lurie and then-team president Joe Banner, the future Hall of Fame coach explained his football philosophy in cheat-sheet form: the need for two offensive tackles, a quarterback, two pass rushers, and two corners. From there, “Big Red” would figure the rest out.

So ramp up the hyperbole over generational skill-position talents all you want but you might also want to note that the Eagles have not strayed from their default setting in an actual generation.

That said, everything evolves — and football is no exception — so it was interesting that Banner himself wrote about changes in positional value around the league last week for The 33rd Team.

For the risers — the changes are subtle.

Right tackles becoming nearly as valuable as left tackles due to the increase in strong-side pass-rushers on the other side of the football, the realization that the interior offensive line needs to be budgeted for thanks to the athleticism of interior rushers like Aaron Donald, and slot corners, long thought of as the stepchildren of the CB room, something that has resulted in talented playmakers wreaking havoc from inside the numbers.

As Jim Schwartz has often explained — everything about defensive football is reactionary to what the offense does. When Trent Williams is out there at LT, you better have a pass rusher on the other side and when teams are clearing-aisling it up front inside, put an athlete opposite them. The Patriots, meanwhile, dominated the inside of the field for a decade before defenses started catching up.

The “fallers” start with edge rushers becoming more valuable than the left tackles because of their ability to impact games along with the obvious dinosaurs in what has become a spread game — running backs and Mike LBs.

The one surprise was receiver, according to Banner.

“There is just such an influx at the position, and I think a lot of the top 20 wide receivers provide close to equal value, unless you are talking about just the top three or four,” the former Eagles president wrote.

So ask yourself if you are really going to pound the table for Chase being the next Jerry Rice, Randy Moss, or Calvin Johnson because those are the measuring sticks. Is Pitts really going to be Kellen Winslow, Tony Gonzalez, or Travis Kelce or the Unicorn weapon carving out a new position? Or the more likely end game of just a really good player?

“It’s always about the player,” a former NFL GM told PhillyVoice.com. “It would be nice if value [of the position] matched up, but sometimes it doesn’t work that way.”

In the 2021 NFL Draft, there is really only one OT worthy at No. 6 overall — Oregon’s Penei Sewell, no edge rusher, and the QB Philadelphia likes (outside Trevor Lawrence who doesn’t count for obvious reasons) is out of reach.

So Roseman manipulated the board to where position and value will match up.

“If you can get a great player, take him and figure out everything from there, I think you learned something with [Tampa Bay linebacker] Devin White. Some teams wouldn’t value him at 5 [No. 5 in the 2019 draft] but [Buccaneers GM] Jason [Licht] was right.”

Back in 2007 the Minnesota Vikings were at No. 7 overall and had a running back in Chester Taylor coming off a 1,216-yard, 42-catch season when Adrian Peterson fell to them. Asked about the pick after and why RB with a productive option already on-hand and plenty of other holes, a then-Vikings personnel source gave me a colorful answer.

It wasn't an insult to Taylor, who was a very good back at the time, just a nod toward true generational talent.

“Everything comes down to evaluation,” the former GM said. “If you believe someone is going to the Hall of Fame you take him. Position doesn’t matter.

“Sometimes people get too cute.”

Did Roseman get too cute? Stay tuned...


John McMullen is the NFL Insider for JAKIB Media, and the co-host of ‘Birds 365’ on PhillyVoice.com. He’s also the host of “Extending the Play” on AM1490 in South Jersey and contributes Eagles and NFL coverage for SI.com. You can reach him at jmcmullen44@gmail.com.