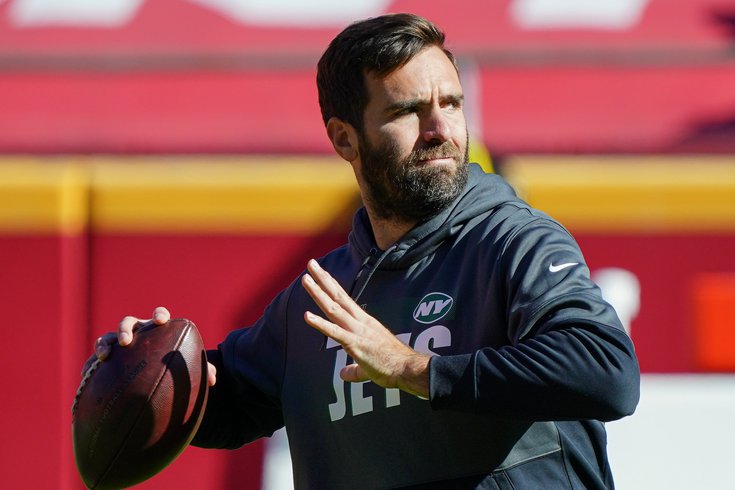 Maybe signing Joe Flacco, his uncomfortably large contract and all, was the right choice for the Eagles.

The regulars at the Legacy Diner on the White Horse Pike approve, but not all of Eagles nation has rubber-stamped one of their own finally lacing them up for his childhood favorite team.

In between was a whole lot of success — an FCS National Championship Game appearance with the Fightin' Blue Hens, a first-round NFL draft pedigree, double-digit postseason wins, and a Super Bowl championship with the Baltimore Ravens. Heck, Flacco even had a short stint as the highest-paid player in league history punctuated with a trip to McDonald’s to celebrate.

Flacco completed his Walt Whitman-commute version of a full circle when he signed a one-year deal with the Eagles to backup Jalen Hurts for the 2021 season, a deal that will pay the veteran QB $3.5 million with the potential of $4M more as a safety net in case Flacco actually has to play.

The “anger” for some comes with those numbers because of the Eagles' current salary-cap woes and the flawed take that Flacco took less to lose four games for the woeful New York Jets last season. You’ve heard the critique. Why is Flacco, at 36, getting more after losing in every opportunity with the NYJ?

The answer is twofold and rather simple — health, along with supply and demand.

Flacco took less to backup Sam Darnold with the Jets because he was coming off neck surgery and there were serious concerns over his future from a medical standpoint. Fast forward and Flacco proved he was medically fit to play with New York last season and league sources say the San Francisco 49ers were in the mix this time around to sign Flacco as their backup, amping up the demand for his services.

Once that's understood, how anyone ultimately looks at the signing depends on the prism they're looking through.

Under Jeffrey Lurie’s reported build-around-Hurts restrictions, Flacco is as good as it gets as a veteran backup in this league who is being brought in to mentor a second-year player with four career starts.

Those pointing to Buffalo paying the 26-year-old Mitchell Trubisky a million less and droning on about a similar skillset should watch a couple of Chicago games and note Matt Nagy's attempt to cut the field in half with simple high-low reads to get Trubisky through a game and ask yourself if that’s the kind of player you want to help Hurts reach his ceiling.

Conversely, Flacco’s won at the highest level and more importantly on a consistent basis. On a resume that features a Lombardi Trophy, those double-digit postseason victories, and over 40,000 passing yards, the most impressive bullet point is winning at least one playoff game in five consecutive seasons (2008-12), and six of seven when you add in 2014.

The naysayers will point to Flacco’s obvious reluctance to mentor Lamar Jackson in Baltimore or Drew Lock in Denver but that’s just another helpful hint for the Eagles to understand what went wrong with Carson Wentz regarding the acceptance of competition when you’ve been earmarked as the guy.

“I thought a lot about it. Obviously didn't think we'd be in a position where Carson wouldn't be on this team in 2021,” GM Howie Roseman admitted earlier this month. “I think it makes sense for us to kind of go back and think about some of the things we did and go through that process again.”

Flacco was a decade-long starter with the Ravens and brought in to be the guy in Denver, so much like Aaron Rodgers with Jordan Love or Brett Favre with A-Rod himself in Green Bay, yeah, Flacco wasn’t exactly interested in polishing up his heir-apparents.

The Jets were the first team to bring Flacco in as a clearly-defined backup to Sam Darnold and a team source up the Turnpike said Flacco accepted and relished the role of trying to bring along the former Southern Cal star even if it was doomed by the presence of Adam Gase. Similarly, Flacco arrives at the NovaCare Complex with the marching orders of helping Hurts, not usurping him.

You also won’t have the fanbase clamoring for Flacco the minute Hurts hits the inevitable rough patch, something that surely would have happened if the Eagles brought in another former Super Bowl winner who has shown nowhere near the Flacco-level of consistent success over a decade for a third go-round.

Flacco is exactly what Lurie asked for. He is one of the league’s projected better backups who could go in and win a game or two if needed but won’t create waves en route to the ultimate end game of developing Hurts.

The only real problem with this signing comes at the genesis of this plan — Lurie’s actual decree.

If Andy Weidl, who was with Flacco for years in Baltimore and knows him better than anyone in the Eagles' organization, feels the best path forward for the Eagles at No. 6 overall in April is Justin Fields or Trey Lance he should be able to pull that trigger. Under the Lurie-imposed handicapped standard, however, Flacco is as good as the Eagles could have hoped for at backup quarterback.

"We have not been told to do anything other than to try to strengthen the football team and make sure that we're doing the right things now and going forward," Roseman has insisted.

So what curve are you grading on?


John McMullen is the NFL Insider for JAKIB Media, the host of “Extending the Play” on AM1490 in South Jersey and also contributes Eagles and NFL coverage for SI.com. You can reach him at jmcmullen44@gmail.com

You can also listen to John during the week on Tuesday and Thursday on @SportsMapRadio and right here on PhillyVoice.com on “The Middle” with Eytan Shander, Harry Mayes and Barrett Brooks , and on dozens of radio station nationwide courtesy of @JAKIBMedia.