Eagles trade rumors: Could a Nick Foles reunion be in the works? 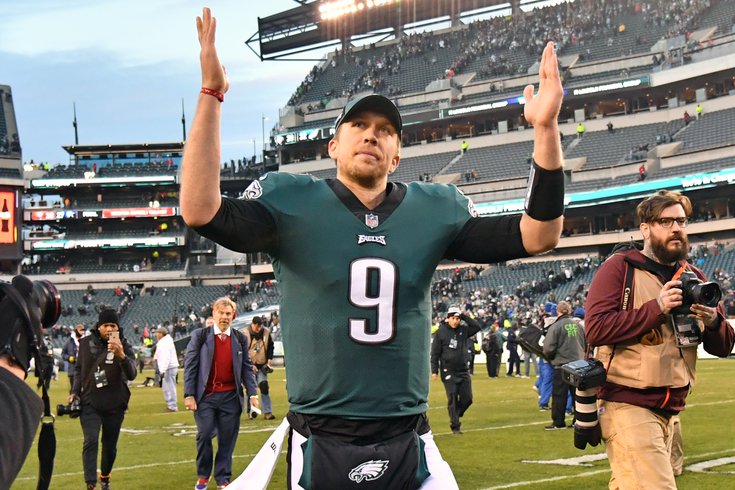 Could Nick Foles be reunited with the Philadelphia Eagles?

There was a time, not too long ago, when this city was divided into two warring factions: those who wanted Carson Wentz to be the Eagles quarterback and those who were staunchly behind his then-backup, Nick Foles.

Foles ultimately left in free agency and, two years later, Wentz went by way of trade following a truly bizarre end to the former No. 2 overall pick's tenure in Philly that saw him go from an MVP candidate to the statistically worst quarterback in the league in just a few short years.

And, with neither remaining in Philly and Jalen Hurts the heir apparent to the starting QB job — barring the team drafting a QB with the sixth overall pick — it seems like no matter what side of that argument you were on, you lost. Or maybe not, as the pro-Foles camp might be getting another chance to have their favorite player back in midnight green.

There was some speculation prior to Wentz being traded to Indianapolis that if the former Eagles quarterback was dealt to the Bears, that Foles could be a part of the package coming back to Philly. That dream died when Wentz went to the Colts, but from that dream (and those negotiations with Chicago) came a possibility that the Super Bowl LII MVP could make it back to Philly after all.

“I wouldn’t take a Nick Foles-Philadelphia reunion off the table right now. Because a few weeks ago, when Chicago was looking to get Carson Wentz, they included Nick Foles in a potential package to Philadelphia. Now, Wentz ultimately went to Indianapolis, but those talks have been ongoing, they’re in place, all they would have to do this week is revive them. Philadelphia is looking for a high-level backup, somebody to come in and support Jalen Hurts. Meanwhile, Chicago is just looking to dump some salary right now. They’re in some cap problems, Nick Foles carries a $6.6 [million] cap hit that they could get off their books. I eventually think he’ll be traded; Philadelphia is an option for him.”

Well that's certainly something, and would be a much needed boost for Eagles fans who have been begging their team to do something — anything — during this NFL offseason. So far, they've really only signed a pair of safeties, including Anthony Harris, and have scheduled a meeting with former Titans CB Adoree' Jackson.

For a team that finished 4-11-1, there's still a lot of work to be done. And while backup quarterback might not seem like a big deal, it very well could be for a still-developing QB like Hurts.

Foles hasn't been great since leaving the Eagles following the 2018 season, but having a guy like that in the room to mentor Hurts (or any QB they might draft) could be huge. He has invaluable experience and wisdom to impart — and you'd be hard pressed to find a player in any locker room who hasn't liked him.

And given that he won't cost an arm and a leg to acquire, likely only a late-round pick because of Chicago's desire to dump salary, he might be the perfect fit for Philly.

Only this time, he'll just be the backup and we'll allow Hurts time to grow and develop. Right, Philly?