Now with the Indianapolis Colts, former Eagles QB reflects on past and future 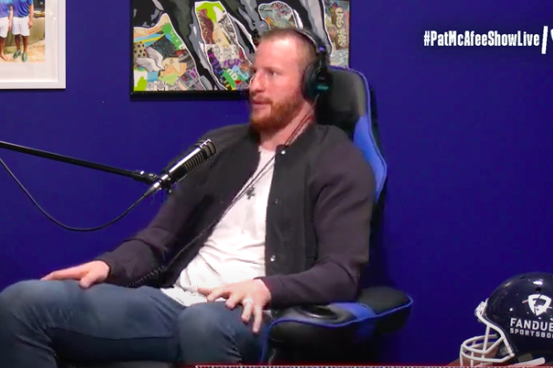 Now a member of the Indianapolis Colts, Carson Wentz appeared on 'The Pat McAfee Show' on March 19, 2021, to talk about his departure from the Philadelphia Eagles and what he's looking forward to as he gets settled in a new environment.

Carson Wentz's first official week as an Indianapolis Colt has given the former Eagles quarterback a chance to reflect publicly on what went wrong last season and what he envisions for his future in the NFL.

By now, Eagles fans are probably getting tired of circling the drain on the Wentz conversation, which represents a low point in team history by any reasonable measure.

But in a free agency period that has been crickets for Philadelphia, it's hard not to notice that the guy who was expected to be here for a decade is now fielding questions about the wreckage he's leaving behind.

One notable remark from Wentz's introductory press conferences on Thursday was expanded upon Friday during an appearance on "The Pat McAfee Show" — namely, that the quarterback's benching against the Green Bay Packers was the point when his mind started to wander beyond Philadelphia and onto possible future landing spots.

"Once Green Bay happened and all of a sudden I'm watching games from the sideline, you have a million thoughts. You can't control them," Wentz said. "You're like, 'maybe there, maybe there, or maybe I'm going to be here and we're going to work it out.' All of those things go through your mind."

Wentz acknowledged that the Eagles' unraveling in a dreary 4-11-1 season colored the whole organization's outlook.

"Everyone's frustrated at how it went down. I could say it 100 times," Wentz said. "It just didn't go the way we wanted and I said it yesterday in my press conference — when I got benched in Green Bay, I thought, 'this might not be it.'"

Wentz was much less formal with McAfee on Friday than he was during his team introduction the day before. McAfee, a former Colt himself, is a free-wheeling interviewer capable of getting Wentz — who's usually pretty vanilla with the media — to crack enough jokes to keep up.

But much of McAfee's focus on Friday was finding out whether or not Wentz is really the "broken man" he appeared to be with the Eagles last season, when his performance fell off a cliff.

Given a second opportunity to address reports that his relationship with Doug Pederson had "fractured beyond repair," Wentz called the general media portrayal of their dynamic "very exaggerated." He said he continues to have a lot of respect for his former coach.

He also said the Eagles' drafting of Jalen Hurts prior to last season had no impact on him.

"I don't like to ever come out and say reporters aren't telling the truth, but I'm not going to dispute every report that's out there," Wentz said. "The way the season went obviously wasn't ideal. When Jalen was drafted, that had no bearing on me. I trusted the organization. I signed that contract. I was devoted to them and I felt like they were devoted to me. I trusted the pick. That had no bearing on my confidence or my abilities."

Now that he's getting his bearings in Indianapolis, Wentz said his excitement goes beyond football. He's happy to be in the Midwest.

"From a family standpoint, I've got an 11-month old baby. I've got a wife. And my wife is actually from Kentucky, so her whole family is a two-and-a-half hour drive away," Wentz said. "It feels like us. It feels like our culture, our values and kind of our vibe, so to speak."

McAfee asked Wentz whether he ever perceived that coming to Philadelphia would be a culture shock when he was drafted by the Eagles in 2016.

"It crossed my mind," Wentz said. "I mean, it's a different world out there, the Northeast. North Dakota is a different world. Everyone just thinks it's a frozen tundra and we live in igloos, which isn't true, by the way. It's a beautiful state."

As for the Philly area, he said he enjoyed his time here.

"I love the place, I love the area, but it's very different," Wentz said.

A lot can be read into whether Wentz had the right attitude in response to being benched in Green Bay. For all the grief the city gives Donovan McNabb, at least he recovered from his 2008 benching against the Baltimore Ravens by leading the Eagles to an NFC Championship game.

And yet, the Eagles were still in the hunt for the NFC East title when Wentz was benched against Green Bay. The difference was that he wasn't given another chance to lead the team to the playoffs.

His play all year didn't exactly warrant it, to be fair. We may never fully know how he acted with his teammates, coaches and inner circle after the Green Bay game, but the Eagles choosing not to let him play again despite the division remaining a free-for-all was probably a major point of disengagement for Wentz.

To hear Wentz explain it — even as his mind wandered — there was no certainty as to whether his time in Philadelphia would actually come to an end at that point. The whole organization was in flux, and part of the team's reshuffling included deciding to get rid of Pederson before the Wentz trade became a reality.

"There were a lot of conversations and I don't know what fully took place," Wentz said. "For me, the season was obviously not how I envisioned and I am like, 'I'm getting away.' I went hunting, I got away, I spent family time ... My agent took care of a lot."

For Eagles fans, bitter as the end may be, moving forward will mean pulling for Wentz and the Colts next season to help convert the second-round pick the team received into a first-round pick in 2022.

Wentz said he has faith in the leadership of Colts head coach Frank Reich, GM Chris Ballard and the rest of the organization.

"They're very process-oriented, which I love, honestly," Wentz said. "I love that because it's — you get fixated on the result all the time and next thing you know, one thing goes wrong and all hell's breaking loose. I'm excited that that's the culture that's in place."

After a first-round exit in last year's postseason, Wentz believes the Colts have a big year ahead.

The headache of the last year will become a lot more palatable for Eagles fans if Wentz can be successful in year one. It'll at least speed up the infusion of young talent the roster needs or give the organization more ammunition to use on rebuilding by whatever means necessary.

That's the reality Philly faces just a few years after the Eagles delivered the city its first Super Bowl title. And you know what? It's probably better than dealing with the see-saw that Wentz's time here became after the high of the championship glory wore away.