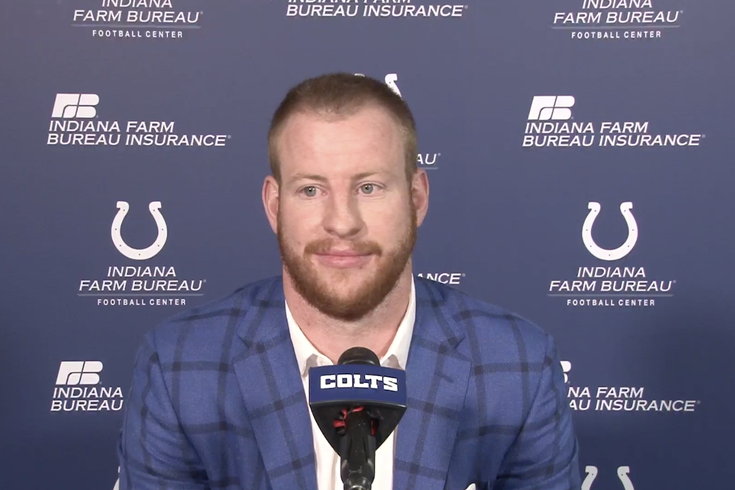 Carson Wentz was introduced to the Indianapolis media on Thursday.

Carson Wentz had his introductory press conference with the Colts on Thursday — "coincidentally" at the exact same time that Howie Roseman and Nick Sirianni were answering questions from Eagles media members on another Zoom channel.

But that didn't stop Philadelphia reporters — like Howard Eskin and Les Bowen — from dropping by to ask Wentz a few penetrating questions. In fact, an incredibly vast majority of the 30-minute conversation was centered on just what, exactly, went on in Philly to propel him to Indianapolis.

"There's a lot of things in this life that we can't predict," Wentz said, wearing Colts blue suit. "There's a lot of crazy circumstances, not how you expect things to unfold. When you're drafted in a place like Philly, you have high expectations... obviously the year didn't go how I planned, how we planned."

Wentz didn't look thrilled to be answering questions he has obviously been avoiding since his benching by the Eagles back in November — but he did answer all of them and through the dry and generic answers, there were actually some pretty interesting nuggets of information shared by Wentz.

Here are some of the ones you might be curious to know about:

"Last year came and went. It was a tough year for everybody... "

"Last year didn't go the way I envisioned it."

"It wasn't fun. It's not fun when things are going so good for years, obviously the Super Bowl and all the things that happened, not being on the field due to injuries. As a man you have look yourself in the mirror and learn from it, become a better man, a better player. I am not going to lie — it wasn't fun, it was difficult."

On when he knew he wanted out of Philly

"Green Bay [after being benched] was probably the moment when I realized 'this may not be it'... I had no idea if I was going to start, be on the bench, all of those things go through your mind."

On whether he demanded a trade

"After the season, a lot of conversations with my agent back and forth and those type of things — it wasn't the season everyone envisioned, it wasn't how I envisioned it. I am not going to delve too much into those conversations."

"For starters, there were a lot of conversations at the end of the year with my agent and everybody, where I’m not going to dive into the specifics of that. As far as being a competitor, I’ve never once questioned my competitiveness, but at the end of the day this was outside of my control. I’m appreciative of everything that happened in Philly, with all of the opportunities. I know where I’m at today, and for five years I gave everything I had, on and off the field."

On reports about his being a bad teammate

"I am a competitor. I want nothing but to win... I hope guys know, whenever our paths go separate ways, that I cared about them and that I am going to be there for them.

"I am not a perfect human being. I have made mistakes in the past... I have flaws, I am going to do everything I can to be the best I can be.

"You wanna play the detective, find out who said it, who did what, and all of those things. But it’s like, does it matter? Whether someone feels that way or not, that’s what’s out there. So how can I learn from it at the end of the day? I think I’ve learned in this business and in life that you’re not going to make everybody happy. As much as you want to, you can’t. It’s unfortunate people have those opinions, but I’m going to learn from it and try to be the best teammate I can be. If any of my teammates think I wasn’t the best teammate, I apologize, and wish I could be better. Last year was tough for everybody, just building those relationships, but it’s something where given the environment this world is in, it takes being very intentional. So I look forward to doing that, and like I said, you want to play detective but at the end of the day people have their opinion and you do everything to be the best you can be.”

RELATED: Eagles finally give their side of the story on Wentz trade

"Jalen and I had a good relationship and I wish the kid nothing but the best. He has a lot of ability and I was impressed with how quickly he grasped the offense and how well he did. I would have loved to have been the guy playing the year out, but that's not how it unfolded. I have a lot of respect for him."

"I trusted Howie and the ownership there to make the best decisions for the team and they showed me nothing but confidence and trust... I don't think that had influence on me one way or another."

On media leaks about him this winter

"I'll be honest, I didn't know I have been called washed up yet, that's a new one to me. I don't read what's out there or look at social media. Once the offseason hit I just wanted to get away, spend time with family, hunting and stuff, at the end of the day you can't please everyone... obviously you want everyone to view you in a perfect light but that isn't going to happen."

Wentz has some flaws, but he did stand up and give at least partially responsive answers and he deserves credit for that. Just as he does for lining up behind the Eagles' battered offensive line play after play until he was benched in 2020.

"For five years I gave everything I had," Wentz said, "and when I lie my head on that pillow at the end of the night, I know I gave it everything I ever had. "

Unfortunately, this press conference will likely not be the end of the Carson Wentz saga, as his exit from Philly has done pretty severe damage to the team, particularly as Howie Roseman tries to piece a roster together for 2021. No one in their right minds expected Wentz to be putting on a No. 2 Colts jersey the year his extension kicks in.

In the dueling zoom press conference happening at the NovaCare Complex in Philly, Roseman too gave a non-answer about whether or not it was Wentz who forced the trade.

"A lot of honest conversations with him and his representatives about where he was," Roseman said, "and the feeling was that maybe it was best to kind of move on. We told him it would have to work out for both sides and I think that’s what the trade is with Indy."

Ironically, Eagles fans have a vested interest in rooting for their former franchise quarterback to succeed with the Colts. If Wentz plays well enough to start all year, the Eagles will get a first round pick in 2022.

You can watch the full press conference right here: