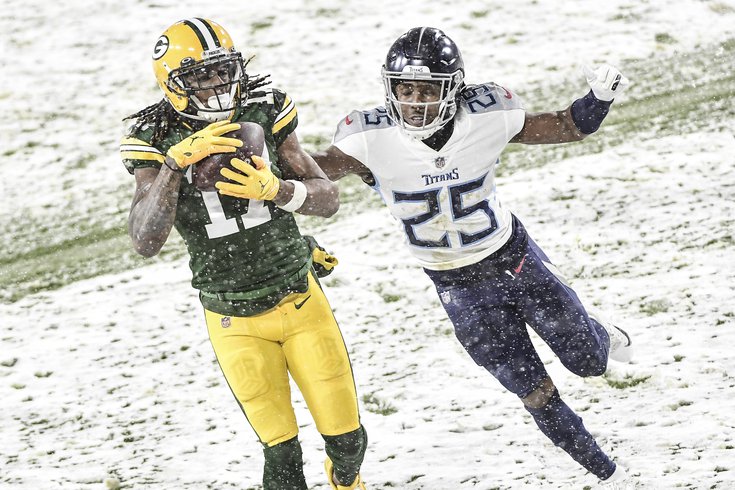 The first three-plus days of free agency have come and gone, and the Philadelphia Eagles have pretty much stood on the sidelines during the first wave of signings. Now that many of the big ticket names have found their new teams, let's take a look at 10 bargain players who still make sense for the Birds.

Prior to the start of free agency, we published a series of articles picking out players we thought would make sense for the Eagles. There were three players each in versions 1.0, 2.0, 3.0, and 4.0.

Seven of those 12 players have already signed, none with the Eagles. The remaining five still makes sense for the Eagles, in my view. You can click on their names for a deeper look:

• Dan Arnold, TE, Cardinals (Age: 25): Arnold is a WR convert who had sort of a breakout season in 2021, catching 31 passes on 45 targets for 438 yards and 4 TDs, for an impressive yards per target average of 9.7. He's not a good blocker (neither was Zach Ertz), but he's long and athletic, and could be a pass-catching TE complement to Dallas Goedert.

• Gareon Conley, CB, Texans (Age: 25): Conley is a talented, and still young CB who I'm told the Eagles would have taken at 14th overall had he not been accused of sexual assault just prior to the 2017 NFL Draft (he was later cleared). Conley missed the entire 2020 season as a result of a pair of ankle surgeries, but if healthy, he has excellent ball skills and could be a good starter on the outside for not a lot of money.

• Malik Hooker, S, Colts (Age: 24): Hooker was taken one pick after Derek Barnett in the 2017 NFL Draft, and like Conley above, he is young and talented, but comes with significant injury concerns. Hooker played for new Eagles defensive coordinator Jonathan Gannon in Indy, and could serve as a player who who already knows the system and can help his defensive backfield teammates during the offseason.

• Damontae Kazee, S, Falcons (Age: 27): Kazee is an undersized safety with tackling issues who is returning from an Achilles tear, but he creates turnovers.

• Jamal Agnew, KR/PR, Lions (Age: 25): Agnew likely won't help in the regular defense or offense (he has played CB and WR), but he can return kicks and punts at a Pro Bowl level.

• Marcus Mariota, QB, Raiders (Age: 27): It was previously reported (by Ben Standig of The Athletic) that the Eagles would have interest in Mariota if he were to be traded or released. The Eagles won't be trading for Mariota, but it feels like he should be released soon.

Decision is coming: The #Raiders asked QB Marcus Mariota to take a paycut down to just $3M this year, source said, and if he refuses the team will move on. While a release is likely, the team has been able to trade players they would cut. That remains possible. He is due $10.725M

If some team views Mariota as a starter, or at least a backup who can compete for a starting job, then the Eagles should not be competing with them to lure him to Philly. But if his price tag is close to the $3 million that the Raiders would prefer to pay him, then you can squint a little and find some value in having decent backup. But certainly, a team like the Eagles that is highly unlikely to contend in 2021 should not be overspending a big chunk of their already extremely limited funds on a backup quarterback.

• Duke Johnson, RB, Texans (Age: 28): The Eagles were interested in Johnson during the 2019 offseason, but so were the moronic Houston Texans, who traded a third-round pick to the Cleveland Browns for him. Johnson had a down season in 2020, rushing for 3.1 yards per carry, but he remained a threat in the passing game.

Because the Colts heavily used their running backs in the passing game a season ago, the belief is that the Eagles might do the same under Nick Sirianni. Johnson would be a competent backup with receiving chops, and a clear upgrade over Corey Clement. He should also be cheap after the Texans released him.

• Adoree' Jackson, CB, Titans (Age: 26): Just before the start of the new league year, the Titans released Jackson, rather than pay his fifth-year option. Jackson had something of a mysterious knee injury that caused him to miss the first 13 games in 2020, and there were questions as to whether he should have been able to return sooner.

Jackson was a first round pick of the Titans in 2017 (18th overall) who the Eagles brought in for a pre-draft visit. In his first three years in the NFL, Jackson has been a productive player, both as a corner and as a punt returner. If the price is right, and if the Eagles are comfortable with his desire to play, he would solve a huge hole at outside corner.

• Eric Wilson, LB, Vikings (Age: 27): New Eagles defensive coordinator Jonathan Gannon is a Mike Zimmer disciple, which means that there's a decent bet that Eagles linebackers are going to get more opportunities as blitzers. There's also speculation that Gannon will run a lot of Cover-2, which means that those linebackers better also be able to play zone coverage.

The belief here was that Wilson would be signed quickly in free agency, and for good money, so we didn't even bother profiling him initially. But he's still out there, soooo...

• Tanoh Kpassagnon, Edge, Chiefs (Age: 27): Kpassagnon is a 6'7, 290-pound DE that the Chiefs over-drafted in the second round in 2017, who has had disappointing production in his four years in KC, collecting 75 career tackles (12 for loss), 7 sacks, and 18 QB hits. He did have an impactful AFC Championship Game during the 2019 season, when he sacked Ryan Tannehill twice.

Kpassagnon was a raw defensive lineman out of Villanova who needed time to acclimate to the NFL level, and while he has improved along the way, his best role right now is probably as a rotational rusher with inside-outside versatility who has a chance to continue to develop into more.

In 2018, 6'8, 295-pound Margus Hunt had a nice season with the Colts, when Gannon was on Indy's staff. There are parallels between Kpassagnon and Hunt, in that they were both huge players with raw talent, and slow starts to their careers. Kpassagnon could be an upside player worth taking a flier on.