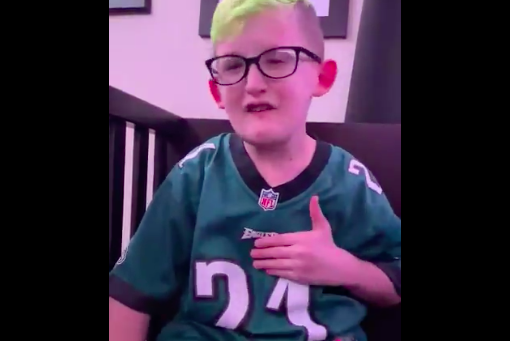 Giovanni Hamilton will now only use social media to share his own content with followers, according to his mom.

Philly sports fans who have enjoyed engaging with Giovanni Hamilton on social media about the Eagles and Carson Wentz will no longer get to do so.

After being cyberbullied, the 13-year-old superfan is stopping responding to mentions on social media, Hamilton's mom, Shannon Algarin, explained in a tweet Thursday morning, and from now on, Hamilton will only use social media to post content.

MORE: Lt. Gov. John Fetterman explains in blog post the significance of tattoos on his forearms

This comes after Hamilton posted two photos of himself on social media Wednesday morning wearing his new No. 2 Wentz jersey that he received from the Indianapolis Colts.

thank u @Colts 🙌 i am so happy to have my guy @cj_wentz new jersey pic.twitter.com/jNNUQwzPPj

While the vast majority of responses were positive, others were apparently not pleased to see the boy wearing the former Eagles quarterback's new uniform. Among the negative messages Hamilton received was a threat to break his kneecaps, his mother said.

"Giovanni's told us so many times during the pandemic that his podcast saved him mentally during this time, "Algarin wrote. "He absolutely loves it and he shouldn't be punished because of bullies on the internet."

The family will also be starting an anti-bullying initiative to provide insight on the impact such online threats can have, according to Algarin.

"It's just too much for anyone let alone a child who's just thrilled he gets to wear his hero's jersey to all his hospital appointments today," she said.

The new rules for Giovanni and social media. If any of our friends want me to pass along a message to him at anytime please send me a DM. I’ll make sure he gets it. But he’s not engaging on here anymore. He will just post his content and get off. pic.twitter.com/UaUVXk82VJ

After Wednesdays incidents, Hamilton put out a follow-up tweet, saying that he would be taking some time away from social media. He also urged his followers to be kind, on and off the internet.

i am gonna take a couple of days off guys, i remember how bad it got here when i wore a travis kelce jersey

i just wanted to thank the Colts for welcoming me to the team and for making sure i got my fav player’s jersey for therapy this week.

be kind on and off the internet💚

Many took to social media Thursday morning in support of Hamilton, including the Eagles.

We’ve always got your back, Giovanni.

In 2018, the Eagles helped Hamilton's dream of attending a game come true. Then in 2019, Hamilton got the chance to meet Wentz at Eagles training camp, and in October he received attention for the get-well message he posted to Dak Prescott after the Dallas Cowboys quarterback broke his ankle.