Phillies prospect Pivetta met boyhood idol Saturday: 'He knew I was a stalker' 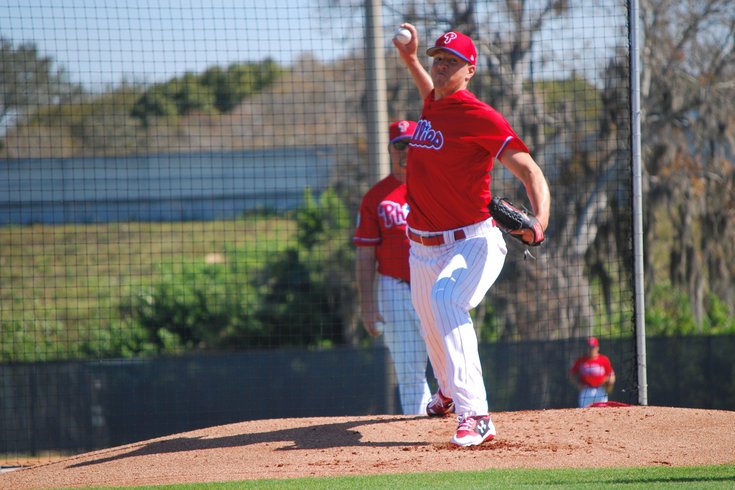 Nick Pivetta arrived in the Phillies clubhouse on Tuesday. He is tentatively scheduled to start in place of Aaron Nola on Wednesday night for his MLB debut.

CLEARWATER, Fla. – If pitching for his home country in the World Baseball Classic next month and making his Grapefruit League debut in a Phillies uniform against the New York Yankees at Steinbrenner Field in Tampa on Friday weren’t enough, Nick Pivetta had the chance to meet his boyhood idol during his first major league Spring Training.

“I got to briefly shake his hand,” Pivetta said with a laugh. “He knew I was like a stalker.”

Apparently someone gave Halladay the heads-up that the Canadian native was a big fan.

“Oh, you’re the guy from British Columbia,” Halladay said to Pivetta during their brief exchange.

“At least he knows about me,” Pivetta joked.

The 24-year-old Pivetta is a native of Victoria, British Columbia and grew up as a Blue Jays fan. He was 10-years-old when Halladay won the 2003 American League Cy Young Award, during the beginning of his decade-long dominance as Toronto’s ace.

With light hair and a 6-5, 220-pound frame, Pivetta actually resembles Halladay a little – he just needs to grow out some facial hair.

“There are hundreds of things I respected about him,” Pivetta said Sunday morning, “but, the one thing is the way he went about his business and how hard he worked. From Day One, I’ve realized how hard he worked and what kind of pitcher and role model he was for everyone else, his teammates. That resonated with me, that’s what I want to do when I get older and I’m more established.”

Halladay, 39, lives in nearby Oldsmar, Fla.