Is Phillies red-hot June a sign of things to come or a short-lived fluke? 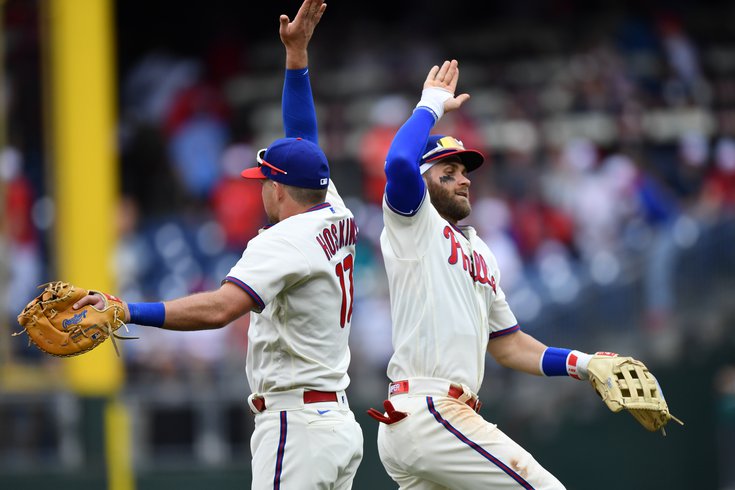 The Phillies will be back, soon!

In nine games to start the season's third month, the Phillies are 7-2. They are firmly in second place in the NL East and as of Monday were tied with the Mets for the most wins in the division. Heading out west for a tester of a road trip, the Phillies are coming off four straight wins, three of them walk-offs.

Six games against the Dodgers and Giants are ahead, but the two juggernauts of the West Coast won't be taking the Phillies lightly.

In what is admittedly a very small sample size, the Phillies' bats have come alive as the team has scored nearly seven runs per game and have outscored the Nationals, Braves and Yankees by 28 runs in that span. Here's a deeper look at their recent accolades:

In June, Andrew McCutchen and Alec Bohm are hitting .355, Odubel Herrera is hitting .333, and J.T. Realmuto is hitting .323. In total, 11 different Phillies hitters have an on-base rate higher than .333.

But we would be remiss if we didn't mention Jean Segura, the Phillies' second baseman who is making an overwhelming case to be an All-Star this season. The 31-year-old veteran started this month hitting a more than respectable .319. All he did was raise that average to .339, adding a pair of walk-off hits and three 3-hit games in a row, a streak he'll take to L.A. He's hitting .424 this month.

"I can't explain that," Segura told NBC Sports Philadelphia after his second walk-off hit, ending a 7-7 tie game on Saturday against the Yankees. "I was just born to play this game. … I want to be in that situation all the time."

Unfortunately it was the Phillies' pitching that put them in that position, blowing a 7-2 lead and forcing the dramatic ending. However, the Phils pitching, too, has been lights out in July, despite a trio of blown leads that led to Segura's and Luke Williams' walk-off hits.

Strangely, the Phillies lead Major League Baseball with five bullpen wins (and in only nine games, three fewer than many teams in MLB). A trio of key relievers, Brandon Kinzler, Hector Neris and Connor Brogdon have been pretty awful in June, combining for an ERA of 11.57. The rest of the pitching staff has a 2.13 ERA this month.

Aaron Nola won his June 1 start and his June 14 start. In between, Phillies starters did not earn any wins, with a pair of Zack Wheeler dominating starts being wasted.

It's worth mentioning that despite his modest 4-3 record this season, Wheeler leads all MLB pitchers in innings pitched and is tied for the highest WAR in all of baseball at 3.9. He's clearly a top three pitcher in the NL right now along with Jason deGrom and Brandon Woodruff. He'll face Clayton Kershaw in the third game of the Dodgers series on Wednesday night.

The Phillies will arguably be facing their toughest competition of the season over the next week. The Dodgers (39-26) and Giants (40-25) have the two best records in the National League and could put the renewed optimism the team is feeling to bed pretty quickly.

Or the Phillies could hold their own, stay above .500 and give themselves a chance to get back on top of the division when they play four against the Mets the weekend of June 25.

Interestingly, the Phillies are still a ways behind the Mets, at least according to sportsbooks. Philly currently holds +850 odds in the NL East, via DraftKings (by way of Pickswise). The Mets are -313 and Braves are +360. Philadelphia is three games behind New York and two ahead of Atlanta.

We'll see what happens to those odds in a week when the Phillies return home. Until then, get ready to fall asleep to the ambient sounds of Chavez Ravine and the words of Tom McCarthy this week with the Phillies playing some very meaningful late night baseball.