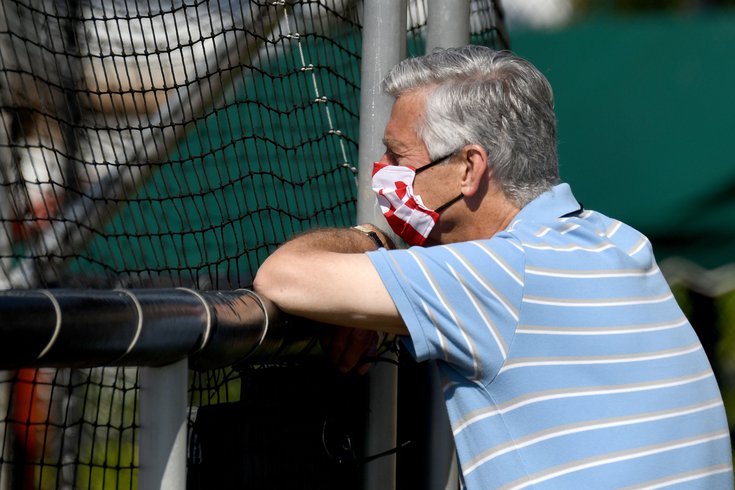 The Phillies are a few games back in the NL East, a division that is the most evenly distributed and competitive in baseball and one that could be the Phillies for the taking if they get their crap together.

But if they can't show they are a first-place team over the next 40 or 50 games leading up to the trade deadline at the end of July, don't get your hopes up that they'll try and close a gap, any gap, with a big splash as a buyer in the trade market.

President of baseball operations Dave Dombrowski has a rich track record of making blockbuster moves, but perhaps surprisingly, he's been more reserved transactionally than you might think. Most of his biggest trades have come in the offseason, like trading for Max Scherzer when he was with the Tigers or for Chris Sale when he was with the Red Sox.

He has an incredible hit rate with his June and July deals, but that's mostly because he has acted as a front-runner when he has been a buyer almost all of the time.

In 13 deals made as a buyer* at the deadline as the GM for the Marlins, Tigers and Red Sox — three teams he has taken to the World Series (he won with the Sox and Marlins), Dombrowski has made a move while already in first place in a respective division 10 of those times.

*There were some other deadline moves made by Dombrowski — like trading for Placido Polanco in 2005 when his team was in last place — that don't really fall under the umbrella of buying or selling, but somewhere in between. In that deal, he sent Ugueth Urbina and Ramon Martinez to the second-place Phillies, who were moving on from Polanco, who would go one to be named the 2006 ALCS MVP for the Tigers and an All-Star the following year, because Chase Utley had taken over at second base. That's simply a GM taking advantage of the market.

In every single instance of Dombrowski adding a piece to a first-place team, his team has held on to the division to win it. Here's a look at those moves:

If the Phillies are behind by 2, 3 or 4 games when the heart of July arrives, many will be clamoring for the Phillies to go for it — to try and cash in on investments made into superstars like Bryce Harper and J.T. Realmuto.

And there could be some very good players available at the deadline that could help the Phillies. Rockies star Trevor Story could be on the move — and the Phils need to bolster their infield. Texas pitcher Kyle Gibson could be shopped, and the Phillies definitely need help on the mound.

But Dombrowski has a little leeway as far as job security goes. He knows that more than $45 million could come off the books after this season (if the team lets Andrew McCutchen walk) and he might be able to do a better job at upgrading the roster in December than in July, when prices will be high, the luxury tax will loom and competition will be fierce.

This is all to say that unless the Phillies really make a push and show they're a player or two away from actually vying for a World Series, history shows Dombrowski will likely play it safe.