Phillies should be retiring Cole Hamels' No. 35 instead of giving it out 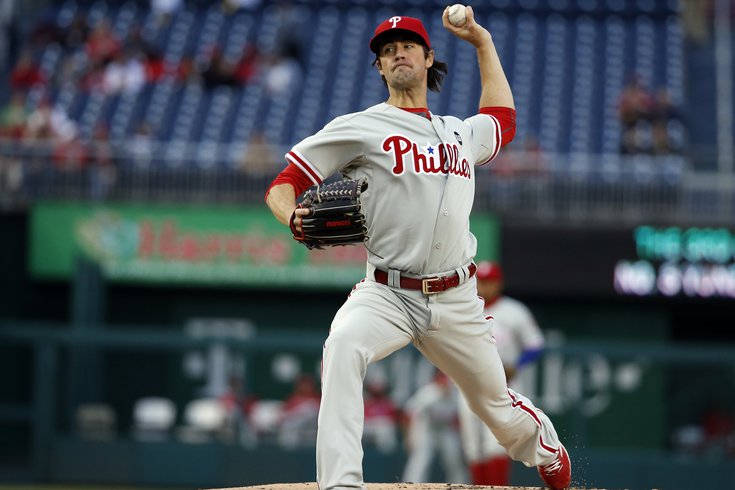 The Phillies made a minor roster move on Tuesday, one of countless similar moves that happens across an MLB season. Starting pitcher Zack Eflin was placed on the IL and outfielder Oscar Mercado was added to the active roster in his place:

OF Óscar Mercado has reported and will be active for tonight’s game. He will wear #35. To make room on the 26-man roster, RHP Zach Eflin has been placed on the 15-day IL (retro to 6/26) with a right knee bruise.

Um... I think I recall a certain Phillies star wearing that number during the greatest run in team history?

Hamels, who last played in the majors in 2020, making one start for Atlanta, deserves way more respect than that. Nothing against Mercado personally and it's unfortunate that he was put in this position, but, come on, Phillies. Are you serious? You can't be!

A three-time All-Star in Philly, Hamels was the 2008 NLCS and World Series MVP, leading the Phillies to their second ever championship and ending a 25-year title drought in Philadelphia sports. That solidifies "legend" status for me. He's a player, just like that homegrown position player core of Jimmy Rollins, Chase Utley and Ryan Howard, who transformed baseball in this city. The Phillies had been so forgettable before that era really took off. All four dudes should have their numbers retired and painted onto a wall at Citizens Bank Park.

The Phillies have an unofficial stance of not retiring numbers of players who aren't in the Baseball Hall of Fame. Who do you think you are, Phillies? You've won two championships in 140 years! The Phillies have the most losses of any team. Ever. Not just in baseball, any sport. They've stunk for the majority of their history. The Marlins became an MLB team in 1993, 110 years after the "Philadelphia Quakers" were established and they have as many championships as the Phils.

You're not the Yankees! The Philadelphia Athletics haven't played here in almost 70 years and have more rings than you!

Do not pretend like you have way too many good players in your franchise history to retire their numbers needlessly. That core four of Hamels-Rollins-Utley-Howard is so integral to this organization and important in the Philadelphia sports landscape overall.

The Phillies haven't handed out No. 6 since Howard was a Phillie. Nor have they handed out No. 11 and No. 26 since Rollins and Utley, respectively, were traded years back. What's the deal with Hamels? Retire them all! I don't care if all or none of those guys end up in Cooperstown one day (Rollins likely has the best case?). All of their numbers should be immortalized.

Am I an old man already at 28 yelling at the clouds because my youth is getting painted over? Perhaps! I respect the players who've contributed to Philadelphia championships more than anything in this world though.

Over 2,000 players have played for the Phillies since the late 19th century. Only two of them have ever won World Series MVP. One of them is the greatest third baseman of all time and the other was a lefty with a killer changeup who should have his number retired so future generations remain aware of his playoff heroics.