By Brian A. Saunders
PhillyVoice Staff
Business Phillies
from 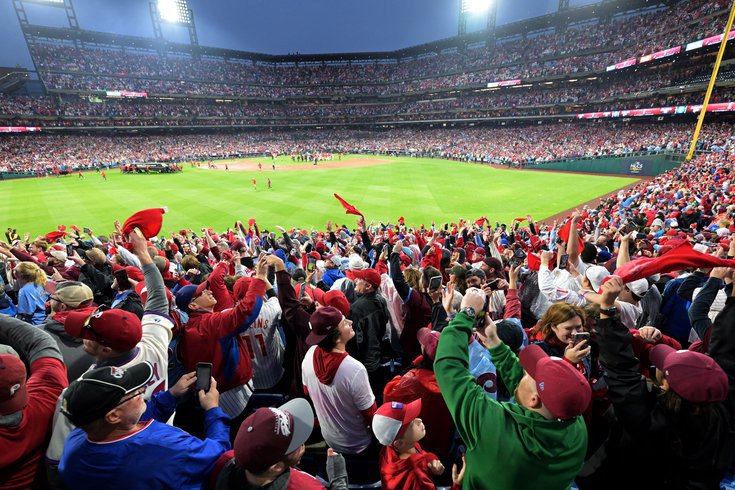 The Phillies' 2022 postseason run generated a $78 million economic impact, including $49 million directly spent in the city, the Philadelphia Convention and Visitors Bureau says.

The Phillies' surprise run from the final Wild Card playoff spot to the World Series produced a ton of excitement, a National League championship and quite an economic return.

The eight postseason games the Phillies played at Citizens Bank Park generated a $78 million economic impact, including $49 million directly spent in Philadelphia, according to the Philadelphia Convention and Visitors Bureau.

Philadelphia hosted about 34,000 overnight visitors, resulting in 35,000 hotel rooms, according to data from Tourism Economics.

Press credentials were issued to 1,900 media members, including reporters from 10 international outlets.

"This was a big win for Philadelphia and its tourism and hospitality sector, especially the city's hotels, restaurants, and their staff who were positively impacted by the Phillies postseason run," said Larry Needle, executive director of PHL Sports, a business development division of PHLCVB. "Philadelphia truly is a sports destination, and we demonstrate time and time again how we excel at hosting the country's largest sporting events."

The playoffs' boost was a boost to the hotel industry, which is still recovering from the strain of the COVID-19 pandemic. In 2020, Philly hotels a 31.1% occupancy rate, according to Tourism Economics. That resulted in just $181.3 million in revenue – a 49.7% loss from 2019. Last year, as the industry began its recovery, hotels had a 40.8% occupancy rate, generating $361.5 million in revenue.

"The Philadelphia Phillies postseason generated significant impacts in the local community as out-of-town visitors and national media that attended games also spent money at local businesses during their stay, including bars and restaurants, hotels, retailers and attractions," said Greg Pepitone, senior economist at Tourism Economics. "What really made it a home run is that this new spending would not have occurred in the community unless the Phillies made their unbelievable postseason run."

As the Phillies continued their run, knocking off the St. Louis Cardinals, Atlanta Braves, and San Diego Padres en route to a World Series matchup with the Houston Astros, some people noted that a Phillies championship might be an omen for a recession.

After all, the Phillies have just two World Series titles in their lengthy history. Their 1980 triumph came amid an energy crisis and a recession that lasted through 1983, when they lost the World Series. And the Phillies' 2008 victory came during a financial crisis.

But the U.S. economy often has been unstable when a Philadelphia baseball team has won the World Series. When the Athletics were still in town, their World Series titles in 1929 and 1930 came as the U.S. fell into the Great Depression.

Still, the financial journalist Ryan Ermey, a Phillies fan, wrote in a CNBC article that banking on the World Series as an indicator of the nation's economic spiral didn't make logical sense.

"It's worth remembering that a million of these sorts of silly indicators and truisms have floated around among market watchers for decades — and they rarely mean anything," Ermey wrote.

For instance, there is a thought that when an NFC team wins the Super Bowl, the stock market performs better. However, when the New York Giants beat the New England Patriots in 2008, markets fell into the Great Recession.

The Phillies did not win the World Series. But their success created an economic boon in Philadelphia – at least temporarily.

"We're most grateful to the Philadelphia Phillies, not only for the amazing ride they took the city on this fall, but the real economic impact they created," Needle said.