Amazon launches online health clinic for common conditions. Who will use it?

As tech giants move into the expanding telehealth market, questions remain about the cost of their services and the quality of care 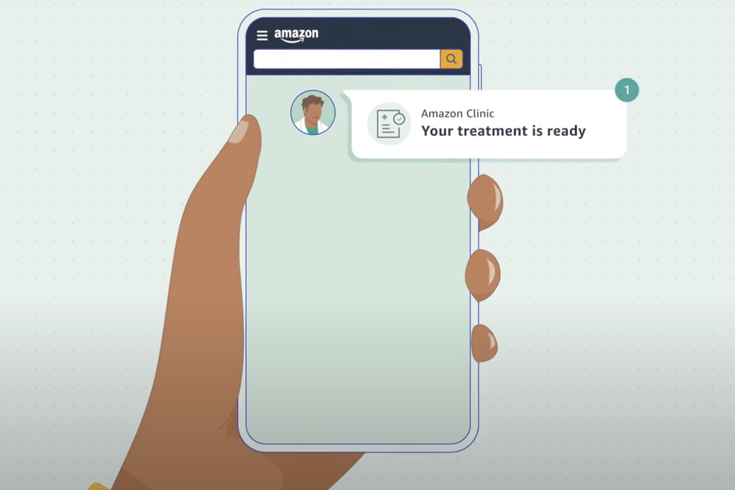 The message-based telehealth service Amazon Clinic is now available in 32 states, treating common conditions from acne and allergies to birth control and heartburn.

Amazon is expanding into the telehealth space with Amazon Clinic, an online platform that connects people to treatment for 20 common conditions.

The message-based service promises solutions from remote health care providers for everything from dandruff to UTIs. It also charges flat fees upfront rather than billing a health insurer, making it accessible to the uninsured.

Though it launched Tuesday in 32 states, Amazon Clinic, and with it, the increasing presence of tech giants in health care, could mark a new wave in the evolution of telehealth, once thought to be a temporary trend that's actually just beginning.

Telehealth has exploded since the spread of COVID-19, as crowded doctor's offices and fear of infection kept many away from their regular appointments. Platforms like Lemonaid, which launched in 2013, offer telehealth consultations for many of the same ailments that Amazon Clinic advertises, while interest in online birth control prescriptions has spurred numerous apps, including Nurx, Pill Club and SimpleHealth. Virtual talk therapy also has become so ubiquitous that it's impossible to listen to a podcast without hearing an ad for BetterHelp.

As pandemic restrictions continue to ease, some are returning to old schedules with regular, in-person doctor's appointments. But for others — particularly those with transportation and mobility limitations — telehealth has been a gift, one they're reluctant to give up. That's incentive enough for big corporations like Amazon to get in the business, but health policy experts like Dr. Preeti Zanwar, a professor at Thomas Jefferson University, warn patients to approach these new players with caution.

"I'm a health economist, so I look at cost," she told PhillyVoice. "How much will it cost the patient? What will be the quality of care? Will it be similar to the quality of care that is received in person? And some of these elements may require a specialist. So will this match the quality and expert consult that is available from a specialist, and that satisfaction with care? We don't know that."

As Zanwar suggests, preliminary research into her questions have been inconclusive. A 2020 study in the Journal of Medical Internet Research found that telehealth did not "routinely" reduce health system costs, but did increase productivity. Studies in Health Affairs have indicated that telehealth may increase access, but it also can lead to more spending and follow-up visits. Researchers at the University of Rochester Medical Center, however, found no support for the "myths" that telehealth care was lower in quality or too much of a barrier for vulnerable populations.

By moving visits online, telehealth can empower patients with more choice. Yet in the absence of traditional screenings, it also asks patients to be experts on their own health. Basic data intake is usually gathered through patient questionnaires — Amazon Clinic is no exception here — which makes self-reporting a concern. If patients do not have access to a blood pressure cuff at home, for example, how can they accurately record that information for a physician?

"We know that even when we go to CVS for a blood pressure check, we've got to take it multiple times to make sure it is accurate," Zanwar said. "How knowledgeable the patient is about a condition, and how accurately they can actually report the condition, that's different than being diagnosed by a clinician."

All this legwork may prove too difficult for older patients, who tend to be the slowest to adopt new technology, Zanwar said. Patients with limited English speaking skills also are reluctant to use telehealth, a 2021 Health Affairs study suggests, and anyone without their own smartphone and WiFi connection is out of the patient pool by default.

Amazon Clinic, which is available in Pennsylvania and New Jersey, may be hoping to pitch itself as an alternative to urgent care for young, healthy patients who require fewer doctor's visits. But as Zanwar notes, the initial offering from the company lacks such focus.

"I was looking at the types of conditions that Amazon Clinic is going to provide care for, and there was a whole list from erectile dysfunction, acne, genital herpes to hair loss, which seems like these are both older and younger populations (and) different genders, across lifespans," Zanwar said.

Ecommerce giants like Amazon also have very different motivations and ambitions than clinicians. While the company's sheer wealth means more dollars to spend on more services, it also raises the question of whether Amazon Clinic is thoughtfully targeting patients, or simply trying to reach as many consumers as possible.

"Adoption to a large extent depends on the comfort of using this, and if you want to reach whoever you want to reach, you want to make sure to involve them from the outset, asking them, if this were to be delivered, how likely are you to use this service? What might be your concerns?" Zanwar said.

"That would be something that I hope these big tech corporations might already be doing behind the scenes."