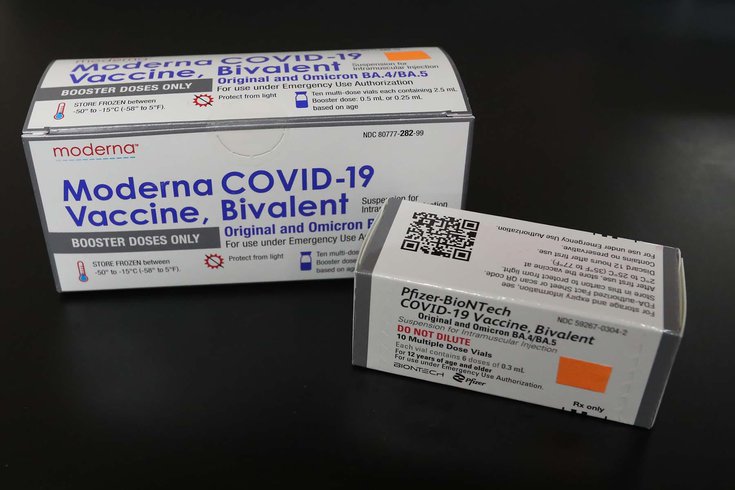 The upgraded shot – a bivalent vaccine that targets omicron and the original form of the coronavirus – "triggers a superior antibody response" when compared to the company's first booster, which only targets the original virus, the company said.

In blood drawn from people who received the bivalent booster, antibody levels were 15 times higher than pre-booster levels.

The bivalent shot was developed to protect against the BA.4 and BA.5 omicron subvariants. BA.5 accounts for about 30% of infections in the United States.

"We are pleased to see that both of our bivalent booster vaccine candidates offer superior protection against omicron BA.4/BA.5 compared to our original booster, which is encouraging given COVID-19 remains a leading cause of hospitalization and death globally," Moderna CEO Stephane Bancel said.
Moderna's findings, which have been reviewed by federal regulators but not yet peer reviewed, came after Pfizer released similar data on its bivalent booster. Pfizer officials said their new shot provides "substantially higher" protection against omicron subvariants when compared to the company's original, two-dose vaccine.

Moderna's study examined antibodies in more than 800 people ages 19-89 who received the original vaccine and the company's first booster. Of them, 511 then received the bivalent booster and about 300 received another dose of the first booster.

Results were consistent between people ages 18-65 and those 65 and older, according to Moderna. The frequency of adverse reactions to the updated boosters was similar or lower than the frequency among those who received a second or third dose of the original vaccine. No new safety concerns were reported.

Like Moderna, Pfizer's study has yet to be peer reviewed, but the company said its bivalent booster provides four times the antibody levels in people older than 55 when compared to its original vaccine.

After one month, the antibody levels increased 13-fold in those over 55 years old, and more than nine times for those ages 18 to 55.

Since the U.S. Food and Drug Administration authorized the bivalent boosters from both companies, vaccination rates have been low. Only 10% of Americans ages 5 and older have received updates doses, The New York Times reported.

As health officials encourage people who haven't been boosted to receive the updated vaccines, a debate has emerged over whether the initial round of COVID-19 boosters already provides the enhanced protection necessary to remain healthy as new subvariants emerge.

The lack of interest in the updated boosters have concerned health officials throughout the country as families prepare to gather for the holiday season.

Officials are worried about a possible surge in respiratory illnesses this season, including COVID-19, and are encouraging people to be protected when they gather with loved ones for Thanksgiving and Christmas.

"The COVID-19 vaccines, including boosters, continue to save countless lives and prevent the most serious outcomes (hospitalization and death) of COVID-19," said FDA Commissioner Dr. Robert Califf. "As we head into fall and begin to spend more time indoors, we strongly encourage anyone who is eligible to consider receiving a booster dose with a bivalent COVID-19 vaccine to provide better protection against currently circulating variants."

People who are looking to get a booster before Thanksgiving are encouraged to schedule a vaccine appointment as soon as possible. Appointments can be found using this online tool or by visiting a local pharmacy.