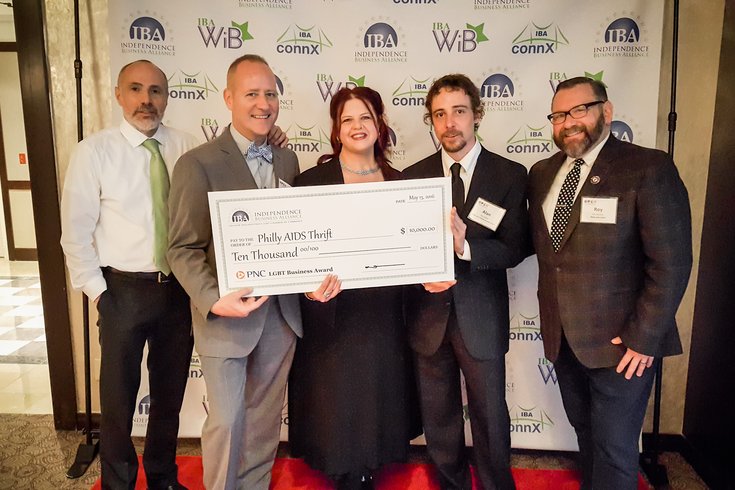 At the Independence Business Alliance's sixth annual IBA Business Leaders Conference this morning, May 13, the alliance — also known as the Greater Philadelphia LGBT Chamber of Commerce — awarded a $10,000 business award to Philly AIDS Thrift, to be put toward the store's Giovanni's Room LGBT bookstore.

“What we really want to focus on is QueerBooks.com, our website, and what we want to do is focus on maximizing the potential," Michael Byrne, board member of Philly AIDS Thrift, told PhillyVoice. "We see that has a lot of potential to really expand and grow and increase revenue for the store. So, what we’re going to do is redesign the site and do some work on it, and make it fresh and modern and user-friendly. And we’ll look into search engine optimization research, so that when people search we show up.”

Philly AIDS Thrift took over Giovanni's Room, the country's oldest operating LGBT bookstore, in August 2014. The rebrand largely continued the bookstore as it was, with the exception of added merchandise from its Queen Village outpost. In many ways, this is the first overhaul of the bookstore since the takeover and acknowledgment that the bookstore could use a 21st-century tune-up.

DeLaMar insists there is still a place for an LGBT-specific bookstore, even as similar shops continue to close in major cities like Chicago, Washington, D.C. and New York.

“One thing we liked is that their plan was one that was going to impact the community both in the nonprofit work they do, but will likely be able to produce a number of net jobs for Philadelphia [through the bookstore]," Wilca explained. "They had a methodical, strategic plan over the next three to six months of how the $10,000 will be used to ramp up online sales, one of the areas where they are lacking right now. And to scale their business."

Notably, this is the first time a nonprofit has received the award. In the past, the award, sponsored by PNC and handed out to LGBT businesses, was $5,000 and not $10,000.

"The fact that a business organization gave us this award is an added bonus," DeLaMar added. "We’re a nonprofit and we do a lot of work in the healthcare arena, but the fact a business org is looking at our model and sees it's valuable and worth investing in is a vote of confidence."

To date, Philly AIDS Thrift has donated $1.5 million to HIV/AIDS-serving institutions in Philadelphia. Ultimately, the mission is to grow that number.