Philly among finalists for Amazon HQ2

Philadelphia is among 20 finalists for Amazon HQ2, the online retailer's second headquarters.

Amazon announced its finalists on Thursday after reviewing proposals from 238 municipalities located in the United States, Canada and Mexico.

The Seattle-based company plans to invest $5 billion into building a second North American headquarters, which will accommodate as many as 50,000 high-paying jobs. The campus is expected to be equivalent to its current headquarters.

Pittsburgh also made the cut, making Pennsylvania one of two states with multiple finalists.

The company expects to make its final decision later this year.

"We are thrilled at today's announcement and looking forward to working with Amazon's team on the next steps of this process to further highlight all that Philadelphia has to offer," Kenney said in a statement.

In the months ahead, Amazon will take a closer look at each of the finalists by digging deeper into their proposals, requesting additional information and evaluating the feasibility of accommodating the company's hiring plans while benefiting the municipality.

"We were absolutely ecstatic," Philadelphia Commerce Director Harold Epps said at a press conference. "We must have at least 200 emails of congratulations. But let's remind ourselves that this is only the beginning."

City officials will join Amazon executives on a conference call later this week to get an indication of the next steps, Epps said. So far, their reaction has been one of excitement.

Epps said he was not surprised by the finalists, nor did he worry that the Washington area has three finalists.

"If you had given us a sheet of paper, we probably would have gotten 16 out of 20," Epps said. "We've done our analysis and we think our talent, mobility, location and transportation make us competitive against anybody else."

Amazon announced its intention to add a second headquarters in September, encouraging municipalities across North America to submit a proposal by mid-October. 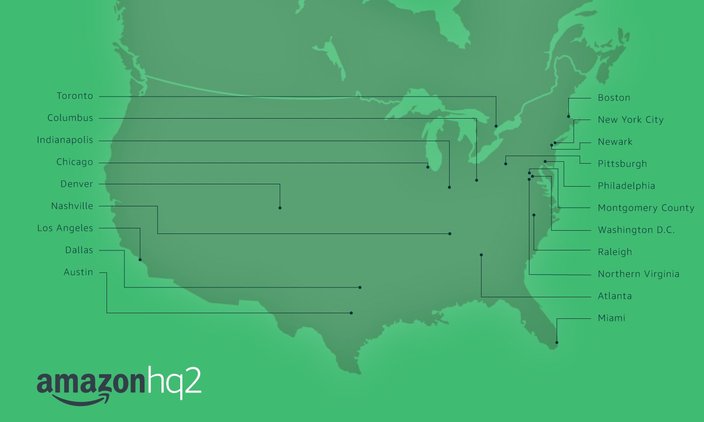 Amazon has announced 20 finalists for its second headquarters, dubbed 'HQ2.'

Philadelphia officials salivated at the opportunity to land Amazon, an eCommerce behemoth that currently ranks No. 12 on the Fortune 500.

At a formal presentation of Philly's proposal, held at the Barnes Foundation in October, Kenney claimed the city is in the "Goldilocks zone" due to its talent pool, affordability and strategic location along the Northeast corridor.

All three sites are ready to accommodate Amazon's full development immediately. But Kenney previously said the city is open to another location, if Amazon so desires.

"I think the Navy Yard is an obvious one, because of the financial districts that are there, its proximity to the airport and to our highways," Kenney said in October. "And, just the cool vibe that's down there with Urban Outfitters and all the other companies that are there."

As part of its public proposal, Philly officials launched a website featuring an array of videos and interactive maps that highlight potential sites. They also tout the city's talent, logistics and liveability.

The public proposal made no mention of Philly's tax incentive package, likely a key factor in luring Amazon to any city.

Pennsylvania reportedly planned to offer Amazon more than $1 billion in tax incentives. But any incentives offered by the city have been kept close to the vest. By contrast, New Jersey has offered up to $7 billion in tax credits to lure the retailer to Newark.

"Those were protected in the first round – they're still protected," Epps said. "What I've always said is, 'You would want us to be aggressive but not irresponsible.' Anything that we do will have to be fully vetted at the city and state levels."

With the competition seemingly stiff, many municipalities got a bit creative in their attempts to woo Amazon.

But none of those offers was good enough to land those municipalities among the finalists.

"All the proposals showed tremendous enthusiasm and creativity," Sullivan said in a statement. "Through this process we learned about many new communities across North America that we will consider as locations for future infrastructure investment and job creation."

Amazon evaluated each of the proposals based on a series of requirements that included the ability to attract top technical talent and expand its headquarters to 8 million square feet within the next decade.

The company also wanted direct access to public transportation and a location near a metropolitan area with more than 1 million people and within 45 minutes of an international airport.

Philadephia could prove attractive to Amazon for a number of reasons, accorrding to David Fiorenza, an economics professor at Villanova University.

Its location places it within driving distance of both New York and Washington, the nation's financial and governmental centers. Recent upgrades to the highway systems are an advantage. And Pennsylvania has low income and sales taxes – which have not been raised in years.

"Being on the east coast is positive," Fiorenza said. "It sets up Amazon to expand into Europe even more in the next 10 years."

By selecting Philly, Amazon would bring increased tax revenue into the city and state, Fiorenza said. But it would also bring some challenges too.

Tens of thousands of people would be moving to the area in short time frame. Various infrastructure systems, including the power grid, water systems, roadways and public transit might need upgraded. More police, firefighters and emergency responders might be necessary.

"Now that you've left the horse out of the barndoor, what about other companies that want to come in?" Fiorenza added. "What about companies that have been here for generations? Wouldn't they say, 'What about me?'"