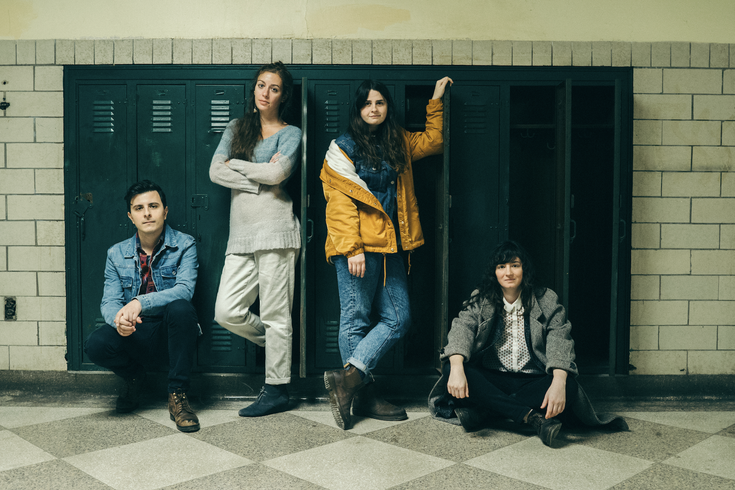 The four-piece band Queen of Jeans formed their current incarnation in South Philly around two and a half years ago.  They have slowly grown in acclaim over that time, leading up to the release of their most recent album, “Dig Yourself,” (Topshelf Records) earlier this year. Their website describes the band's music as "Crockpot pop – a slew of sounds and influences in a juxtaposition that somehow strikes balance, sculpted over time into the refined and tenacious outfit they are today."

But Queen of Jeans is drawing new attention for a video they recently released for the single “U R My Guy.” The video, directed by Bob Sweeney, is a direct homage to the 1999 teen movie “10 Things I Hate About You,” and, specifically, the scene in which Heath Ledger serenades Julia Stiles from the bleachers of a high school football field.

We talked to the singer-guitarist Miriam Devora and drummer Patrick Wall about the video, its same-sex final twist, and some cameos by – of all people – some members  of the Philadelphia sports blogger community.

“I think we had just been talking about videos we wanted to make, and we all love ‘90s movies, and mostly ‘90s because we all grew up in the ‘90s,” Devora told PhillyVoice.

“I think we were talking about ‘Ten Things’ and we thought it would be fun for Patrick to play the Julia Stiles character. But serenading a dude didn’t feel like our truth, or the song’s,” she said, so a woman stepped in at the end as the recipient of the singer’s romantic attentions.

The video filmed over a year ago, the band said, at a suburban high school, but they were “waiting for the right moment” to put it out. It was recently featured in Billboard, where it premiered.

The other twist to the video is that it includes appearances by several people – Brandon Lee Gowton, Jim Adair, John Barchard, Max Rappaport, and Steph Driver – who are part of the bustling community of Philadelphia sports bloggers and tweeters. This was brought about by drummer Wall, who formerly wrote for the Eagles website Bleeding Green Nation and even worked for the Philadelphia Eagles for a time.

Wall described the group as “a little Twitter family,” and said they participated after he put out a casting call.

“One of the really cool things about the Philly sports scene is that everyone is really supportive,” Wall said, adding that he appreciated that his friends didn’t fill the need to “stick to sports.”

Queen of Jeans, which also includes bassist Nina Scotto and guitarist Matheson Glass, talked to PhillyVoice back in 2016 about their origins, and how their name was a play on the King of Jeans sign in East Passyunk that had come down around the time the band formed.

The band is currently touring on the west coast, but they’ll be back in Philly July 27 for a show with Japandroids at the Boot and Saddle.