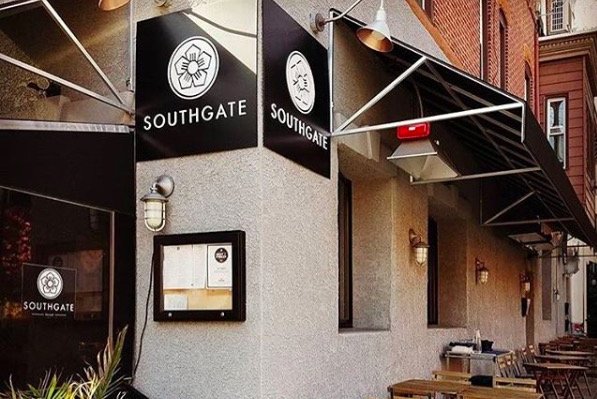 Over the weekend a single Reddit post resulted in some misdirected backlash toward one popular restaurant straddling Rittenhouse Square and Graduate Hospital.

Development crews from Philip Johnson Construction for months have been working near the corner of 18th and Lombard streets, where Korean-American gastropub SouthGate offers indoor and outdoor seating.

The construction project, unrelated to SouthGate, also has closed the sidewalk along part of 18th Street, north of the restaurant and its outdoor tables.

But for the last several months, the construction crew has had a "Sidewalk Closed" sign on the corner, giving the impression that the sidewalk is closed not for construction, but for SouthGate's outdoor seating – a misperception that irked one Reddit user enough to post a photo on Friday.

Uh, is it legal for a restaurant to do this? [18th + Lombard] from r/philadelphia

The post had garnered dozens of responses almost instantly. The situation spilled over from Reddit to Google, and SouthGate managing partner Peter Hwang, unaware of the internet clamor, began getting alerts late Friday night on the restaurant's Google Business listing.

"I dealt with those immediately and went to bed, waking up to a few more notifications, and went on Yelp to deal with those, and tried responding to emails from our website, but the listed emails were fake so that didn't go anywhere," Hwang told PhillyVoice on Monday. He said the sign has already been there two or three months.

"At that point, it occurred to me that there was probably a group mobilizing action on this perceived injustice somewhere," he said. "So I went to the neighborhood Facebook group to put out our side of the story and the truth about the matter."

Hwang posted in the Southwest Center City Philadelphia Facebook group Saturday afternoon, saying the construction crew was required to put signs up because the scaffolding is blocking a portion of the sidewalk north of his restaurant.

"But the negative reviews, anonymous threatening emails are going a bit overboard," Hwang said. "Sometimes it's a bit too easy to read bad intentions into something without taking a second to find out what's really going on. We work, live, raise our child in this neighborhood and take pride in transforming an eyesore into something that benefits the area fiscally and aesthetically."

As of late Monday morning, the Facebook post received 153 reactions and 27 comments, most showing support for SouthGate and some chiding "people with trigger-happy knee-jerks," as one Facebook user phrased it.

"I tend to be a little more of a private person, so airing dirty laundry was not something I was keen on doing," Hwang said. "But the last thing I wanted to be was one of those sob story businesses with a damaged reputation, 1.5 stars on the review sites, trying to dig themselves out from a mound of crap."

Others are hoping the sign can be moved – or another sign can be put in place to specify what exactly is going on at the corner.

"Pretty quickly after, all the negative activity stopped and some of the negative public comments/reviews had been deleted," Hwang said. "There's probably a few straggling 1-stars out there, but we can live with that."

"I just wish it didn't seem to always end up in a 'business vs. the people' so often," he said.

"There is a gigantic difference between faceless billion dollar conglomerates and the small owner-managed businesses that employ a large percentage of the people in this city. I don't believe corporations are people, but small businesses are the sweat and tears of actual people that create jobs, improve their neighborhoods, generate tax revenue, and build community."