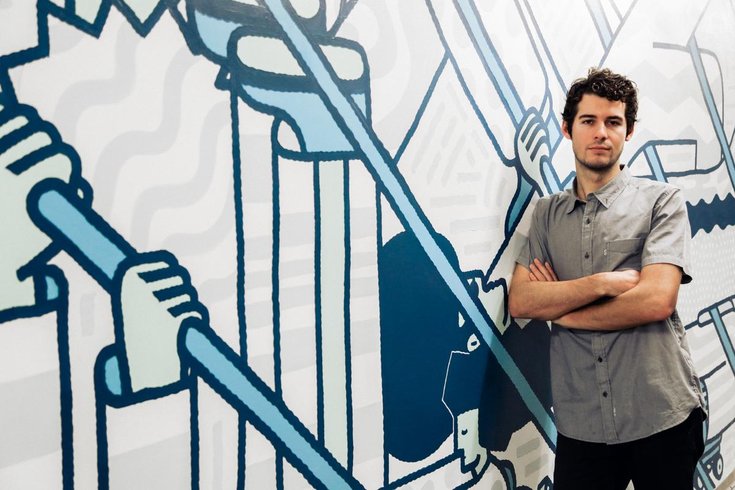 Philly's murals have long hugged the walls of buildings or saluted bridges and have recently taken up residence in coffee shops and on parking meters. Now, they're finding a home in the workplace as a means of motivation.

"Philly has such a rich, creative community, and between the Mural Arts Program and a city that loves and embraces public art and works together to make the city a canvas, we thought this was a good opportunity to harness that," Hilary Sedgwick, associate creative director for ad agency Allen & Gerritsen, told PhillyVoice. "And we wanted something that makes you inspired and excited the second you walk in the door."

Sedgwick commissioned illustrator Nate Harris, a Laurel Springs, Camden County native, to create a 35-foot-long, eight-foot-tall mural that spans a wall nearest the receptionist's desk and across from a conference room at the agency's 16th and Walnut streets office. The idea was to create a piece that was abstract and fostered creativity; she selected Harris to design the mural because of his background working with unusual shapes and figures.

She likened the inherent value of a custom mural in the workplace as akin to having motivational posters hanging on the walls -- the widely purchased, mantra-heavy images popularized in waiting rooms and manager's offices everywhere in the 1990s.

"There’s a reason motivational posters at one point were a popular thing, and I think it's that desire to have something that motivates people," she said. "I think you can do that in so many different ways with a space. But when you go to work you shouldn't look at a blank wall." 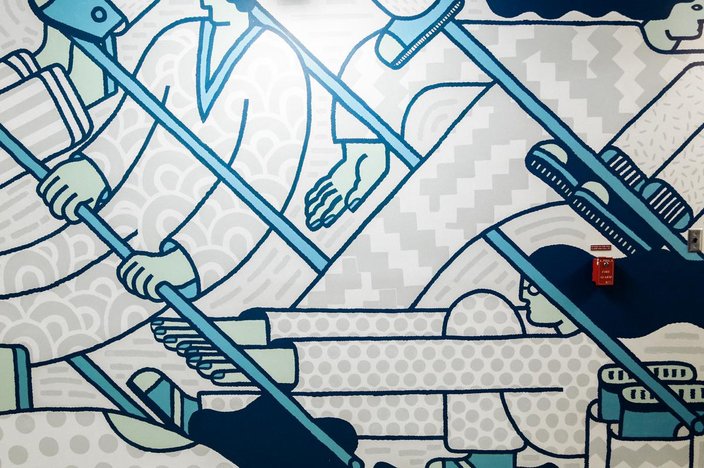 Harris, a graduate of the Art Institute of Philadelphia, was ultimately tasked with fusing his artistic vision with how A&G idealizes its company culture. The product of that is a mural piece he calls "Raising the Bar," which depicts people finding their way over and under bars.

"The whole concept is brought around raising the bar," Harris, 24, told PhillyVoice "But also the process that it takes while you’re doing that. ‘Are you having fun, too?' 'Are you swinging under the bar like an acrobat?’ 'Are you jumping over it?' And everyone helping to raise the bar -- that community of people who all help toward this one goal. But the way everybody gets there is, to me, the amazing thing.”

The mural was sketched on the wall using a tiling projector and china marker and painted using interior wall paint, rollers and a foam brush. The process, Harris said, took him about 50 hours. His work, which ranges in form from wheat-paste street art to graphics for The Dolphin Tavern, to a mural at Elixr Coffee, is most notable for its blending of simple shapes with abstract figures and creating the illusion of movement.

“I think one of the reasons Hilary reached out to me is because they wanted something that felt dynamic for the space and had movement, and I think a lot of my work revolves around those ideas: movement and dynamicity," he explained. 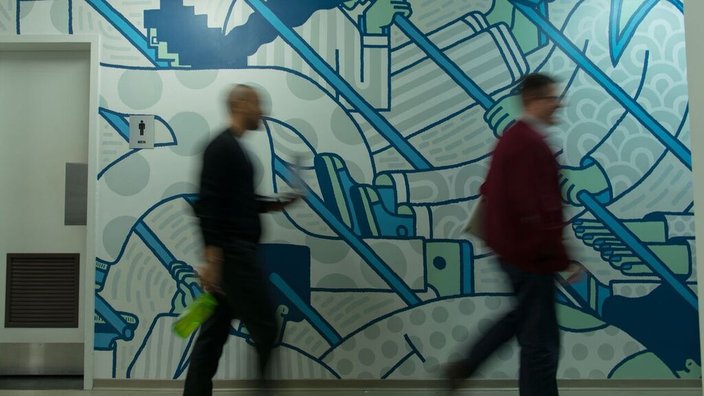 Which is important when workers -- the busy bees that they are -- perceive a piece while filing down a hallway. And its theme, of course, encourages those workers to be motivated while not having to tell them outright, a la those '90s you-go-girl posters so many are familiar with.

Consider it just another step toward both extending the reach of Philly's glistening reputation for mural arts, and rethinking the standard office atmosphere.

“Office environments can be dreadfully sanitary," Harris said. "And I think when you have a commissioned artwork -- whether illustration, art or graphic design -- it’s going to automatically make your office feel custom and individual, and you really can’t replace that.

"Nothing can replace somebody’s touch, their vision."