At Philly colleges, heightened security and concern in wake of threat 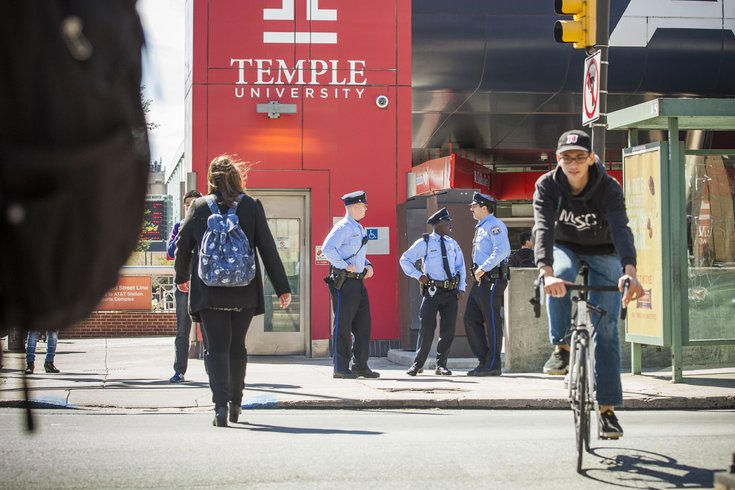 The campus of Temple University in North Philadelphia.

Students and staff at Philadelphia-area colleges saw a 2 p.m. threat of violence – made online Friday against a university "near Philadelphia" – go by without apparent incident.

An hour before the referenced target time, students at Temple University were filling tables at outdoor eating areas on campus. Others were relaxing on the grass on Pollett Walk, near the Bell Tower, more intent on enjoying what turned into a pleasant sun-filled day.

Despite a heightened and visible security presence, it was mostly studies as usual for students at Temple, as well as the University of Pennsylvania and Drexel University, on Monday in the wake of the threat.

On Sunday, the FBI and the Bureau of Alcohol, Tobacco, Firearms, and Explosives had warned dozens of area universities – from Lehigh University in Bethlehem to Rowan University in Glassboro, Gloucester County – of the threat in an e-mail. The threat was for 2 p.m Monday but no specific university was named, authorities said.

The threat has been linked to an online post on the same website used by the shooter at Oregon's Umpqua Community College to announce a deadly attack last week.

Hagemann said he read the post, made on Internet image board 4Chan.org and found it similar to a post on the same website that was, allegedly, made by the individual who killed 10 people during a rampage at Umpqua Community College in Roseburg, Oregon on Thursday, Oct. 1.

“The post had so many similarities [to the Oregon shooting] but, I don’t feel any concern,” said Hagemann. “I can’t miss class.”

Still, the threat had schools taking a variety of precautions on Monday morning. 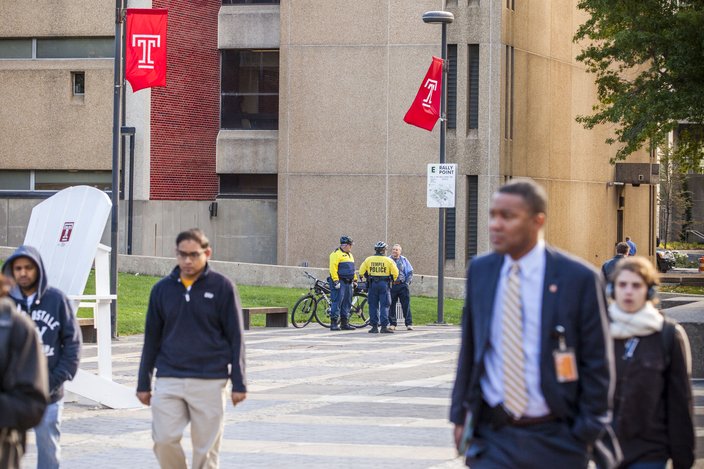 Temple University police have a visible presence near the Bell Tower on the center of campus on Monday morning. (Thom Carroll / PhillyVoice)

On the Temple campus, an enhanced presence by university police was evident at the busiest corners and pathways.

An employee of the Cosi restaurant at 1800 N. Broad St. admitted to having no idea about the FBI alert.

At the University of the Arts, absences are not being counted today, according to a student there.

On Sunday, police at Penn, Drexel, the University of the Arts and Delaware Valley University, among others colleges, said they would boost security on campus.

Drexel also said Monday morning that it was requiring students, faculty and professional staff to show identification to gain entrance to campus buildings.

Manor College in Jenkintown closed its campus at noon Monday "as a precautionary measure," the school tweeted.

Representatives from both Drexel and Penn pointed a reporter to information on each school’s website with information about a public safety advisory.

Otherwise, students said, classes were being held as usual.

“I mean, I’m still going to class, but I have some friends who aren’t,” said Peter Quelly, 20, a sophomore at Drexel.

Quelly, who said the threat made him “worried, but not nervous,” said that at the school, security officers were checking student IDs, but otherwise, it was a normal day of classes.

Yet, at least one teacher, Paige Davis, an assistant professor of psychology at Drexel, said that so many of her students had called out of her Monday morning class, all citing concerns over the Internet threat, that she canceled class.

In fact, Davis said, students emailed her saying they knew for a fact that the threat was aimed at Drexel students specifically. It was a claim that Davis scoffed at, saying she had read the information that was shared by the FBI and knew that no school was specifically mentioned in the threat.

Instead, she joked that students may simply want to use the vague threat as a way to get the day off.

“If you live at Drexel, there’s no reason not to come to class,” she said. “I bet that today will come and go and nothing will happen.”

Still, some students who attended classes this morning said that the fact that the FBI and ATF had issued the alert made it a credible threat that they couldn’t ignore.

“We are probably not going to class today,” said Jazmine Colon, 19, a sophomore at Drexel, who was talking with Elizabeth Hoffman, 19, another sophomore. “Because of the alert and everything that’s happened recently, like that thing in Oregon, this is just a little more credible.”

Others, seemingly decided to avoid class the whole day.

“I’m not going to any of my classes today,” said a sophomore at Penn that asked to remain anonymous. “It’s just not worth it.”

"Schools and students are a priority for us everyday," said Thomas Nestel, chief of SEPTA transit police, on the overabundance of caution in light of Oregon threats being posted online.

Some students took to Reddit to talk about their fears.

"I'm planning on skipping my classes and hiding out in my apartment from at least 12-4," one student posted on Sunday. "I emailed both my professors saying I felt extremely uncomfortable going to class tomorrow with this threat happening, then attached my papers that are due. Hopefully they're understanding about this situation."

Another student posted: My mom demanded that I leave campus. I emailed my professor – since I have an exam (Monday) – and she was completely understanding and let me reschedule my exam."

Others, however, said they wouldn't be cowed into staying at home.

"I'm still going in," another posted Sunday. "I have work to do, and no a**hole is going to prevent me from getting it done. That said, I will proceed with extreme caution and review the shelter procedures on campus, so that if something does happen there's a better chance I can get to safety."

PhillyVoice will be following this developing story all day Monday. Please check back for updates.