FBI, ATF: Threat of violence against 'university near Philadelphia' on Monday 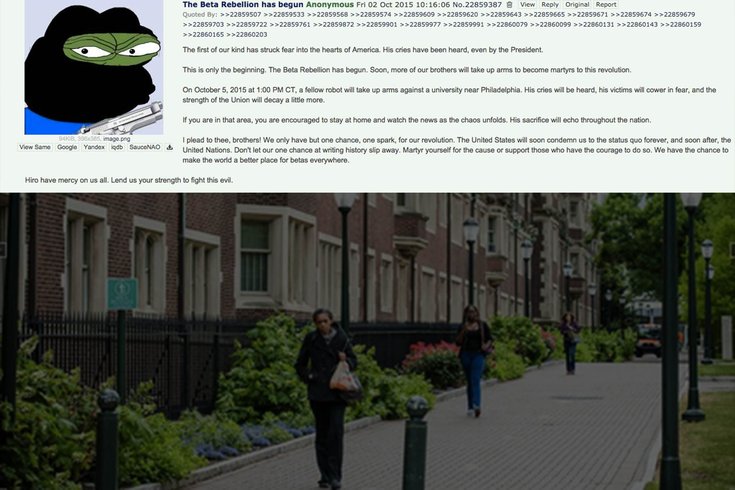 The threat against a college or university "near Philadelphia" was made Friday on Fourchan, an online forum.

A threat of violence against local universities in Philadelphia has students and residents on alert Monday morning.

The threat has been linked to an online post on the same website used by the shooter at Oregon's Umpqua Community College to announce a deadly attack last week.

Dozens of area universities were warned of the threat in an e-mail sent out Sunday by the FBI and the Bureau of Alcohol, Tobacco, Firearms, and Explosives.

The threat appeared Friday night in a thread on the 4chan online bulletin. The anonymous post, titled "The Beta Rebellion has begun," references an impending attack against a school "near Philadelphia" on Monday, October 5.

"The first of our kind has struck fear into the hearts of America," the post begins, possibly referencing the 26-year-old shooter in Oregon, who killed nine people in two classrooms before taking his own life. "His cries have been heard, even by the President."

The post goes on to make explicit reference to an upcoming attack in Philadelphia:

This is only the beginning. The Beta Rebellion has begun. Soon, more of our brothers will take up arms to become martyrs to this revolution.

On October 5, 2015 at 1:00 PM CT, a fellow robot will take up arms against a university near Philadelphia. His cries will be heard, his victims will cower in fear, and the strength of the Union will decay a little more.

If you are in that area, you are encouraged to stay at home and watch the news as the chaos unfolds. His sacrifice will echo throughout the nation.

I plead to thee, brothers! We only have but one chance, one spark, for our revolution. The United States will soon condemn us to the status quo forever, and soon after, the United Nations. Don't let our one chance at writing history slip away. Martyr yourself for the cause or support those who have the courage to do so. We have the chance to make the world a better place for betas everywhere.

Upon receiving knowledge of the threat, the FBI and ATF distributed an e-mail to Philadelphia-area universities. That e-mail was quoted in a tweet Sunday afternoon from Temple University, which referred the campus community to their e-mail for additional information.

#BREAKING: TUPD alerting students of 'a threat of violence has been made online against “a university near Phila.”' pic.twitter.com/NRi13QfaFB

Temple police indicated that law enforcement officials were not aware of a specific threat, but planned to have increased visibility on Monday.

The University of Pennsylvania also confirmed in a tweet that the warning was issued for 2 p.m. on Monday.

BREAKING: FBI and ATF warns Penn and others that a threat of violence targeting a school in the Philly area was made for Oct. 5 at 2 p.m.

Drexel University later released a statement regarding the threats, which they say appeared on social media:

Drexel said it planned to increase police and security patrols on Monday and would coordinate efforts with The University of Pennsylvania, which released the following statement:

We have been advised by ATF and the FBI that they have "no knowledge of any specific threat." However, in an abundance of caution we are working closely with Federal and local Law Enforcement Agencies to monitor this unspecified threat. The Division of Public Safety has increased our police, security officer and CCTV patrols.

At Delaware Valley College in Doylestown, Bucks County, the campus community was also warned of the threat in an email on Sunday.

It said there would be an increased police and security presence on Monday. The email continued:

While we recognize that this is unsettling announcement, please know that we continue to collaborate with law enforcement, and their expertise, and that your safety is the University’s primary focus.

The University of the Arts confirmed receipt of the warning and advised students to be aware of their surroundings. The University said it planned to increase UArts Public Safety patrols on Monday.

One student told 6ABC she was concerned about attending classes Monday:

"Just because all of the recent things have been going on, it's just scary to think it's possibly going to happen on our campus," said Mackenzie Leedy of Drexel University. "So I'm scared to actually leave my dorm tomorrow."

Schools in neighboring South Jersey were also alerting students as a precaution.

Rowan University in Glassboro notified students about the alert and provided contact information for counselors. Some students tweeted concerns about classes still being held. The school reminded them of its attendance policy.

Our attendance policy allows students to not attend class when they have a reasonable concern for their safety. Please see email for info.

Rutgers University – Camden also alerted staff and students of the threat and encouraged them to report any suspicious behavior.

Aiming to address the widespread concern, the FBI issued a follow-up statement on the warning:

"Out of an abundance of caution, the FBI Philadelphia Field Office notified local colleges and universities of a social media posting which threatened violence at a Philadelphia-area college or university for Monday, October 5.

"No specific college or university was identified in the posting. We encourage students, faculty, and employees at area colleges and universities to follow the guidance of their campus security officials.

"The FBI will continue to work with our federal, state, and local law enforcement partners to investigate threats of violence, and, as always, we ask the public to report suspicious activity to law enforcement."

PhillyVoice will be following this developing story all day Monday. Please check back for updates.