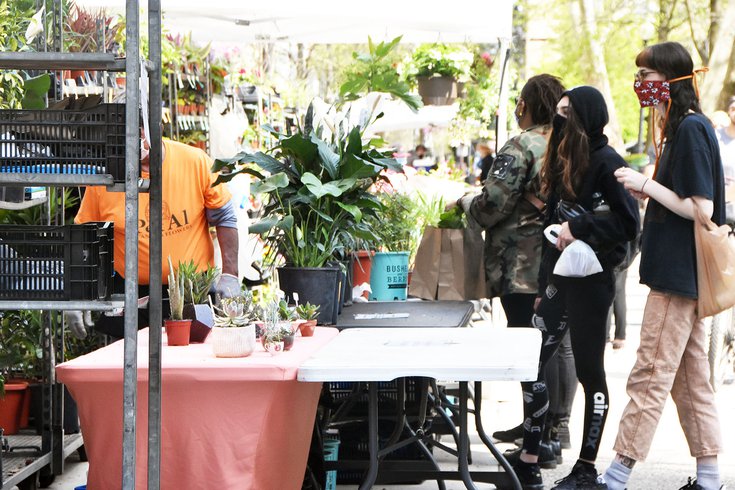 Philadelphia's efforts to combat COVID-19 — from wearing masks to social distancing — have paid off for the city as it continues to see new cases decline.

The spread of COVID-19 has slowed so much that Philadelphia may not be far from entering the green phase of Pennsylvania's reopening plan, Health Commissioner Dr. Thomas Farley said Thursday.

Several key metrics tracked by health officials indicate that Philadelphia is on the right path.

The city reported 156 new cases of COVID-19 on Thursday, bringing its total to 24,107 confirmed cases since the pandemic began. That daily number is slightly higher than in recent days, but Farley said it stems from a batch of 2,100 test results – a large amount.

"The percent of tests that were positive is about 7%. That's a very low number," Farley said. "We peaked at the beginning of the epidemic at about 40%, so that low percent-positive is a really good reflection that the epidemic is very much on the wane."

Nearly all of the city's nursing homes have gone more than two weeks without reporting a new case. Only 10 cases were reported in that span.

Philadelphia hospitals are currently treating 322 patients for COVID-19, while hospitals across Southeastern Pennsylvania have 598 COVID-19 patients.

"Those numbers are decreasing," Farley said. "We're now down about 70% from where we were at the peak."

And one of the biggest concerns of the past week — the impact of large crowds at protests against racism — doesn't appear to be leading to a spike in cases at this point.

"All of our numbers that we're looking at say there's no evidence of transmission yet," Farley said. "It's still early. We're going to have to watch that for at least another week, but so far, so good."

Farley commended protesters for generally wearing masks and trying to maintain distance when possible. He said the evidence of the protests could provide a model for outdoor gatherings in the future.

The city currently is running a limited pilot for its contact tracing program as hiring continues and software systems are put in place to expand, Farley said.

Despite the progress, Philadelphia officials still strongly discourage social gatherings during the yellow phase, including religious services, given the relatively high number of cases in a city of this size.

Philadelphia must remain in Pennsylvania's yellow phase for a minimum of three weeks, but Farley said he believes the green phase may be in consideration in the weeks after that.

"We're making progress towards that, and I'm hopeful we'll be doing it in the coming weeks," Farley said.

Small neighborhood businesses, particularly those from historically disadvantaged communities, will have an opportunity to receive financial assistance to help weather the dual crises of COVID-19 and civil unrest, city officials announced.

The Restore and Reopen Program has received $1.4 million in initial funding to help businesses recover from property damage and inventory loss as a result of the looting that took place over the last two weeks.

Philadelphia's commerce department is partnering with the Merchants Fund on this grant program and is actively raising more funding to provide further support.

Earlier this week, the commerce department received information about the extent of the damage to various businesses and corridors, helping it better craft the program. Application guidelines for these grants will be posted by the Merchants Fund and circulated to community partners in the upcoming week.

A second program, the Restart PHL Loan Fund, has been created by the Philadelphia Industrial Development Corporation with an initial pool of $3 million.

Loans will be prioritized to black- and brown-owned businesses in low-income corridors. The loan application will be released along with additional program details later this month.

"These efforts are intended to provide equitable and immediate relief to ensure our small businesses can sustain themselves and return in a manner that allows them to thrive," Mayor Jim Kenney said in a statement. "Philadelphia businesses, especially those that are minority-owned and on neighborhood commercial corridors, have experienced successive, devastating economic setbacks over the last three months. We thank the Merchants Fund for partnering with us on this effort and are especially appreciative of the continued work of Congressman Dwight Evans in advocating for additional relief."