Demonstrators call for raising Pennsylvania's minimum wage, but also share thoughts on charges being brought against six officers in death of Freddie Gray 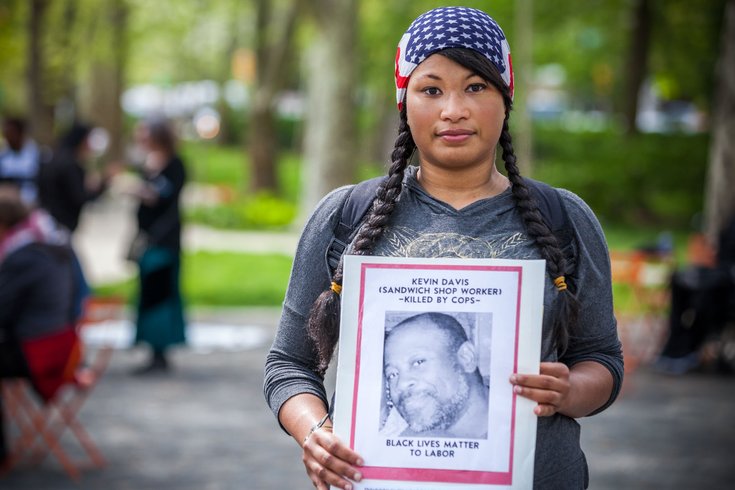 Crystal Richardson was among dozens of demonstrators who marched in West Philly on Friday, demanding an increase to the minimum wage.

Dozens of demonstrators gathered Friday afternoon in West Philadelphia Friday, demanding an increase to Pennsylvania's minimum wage.
But the latest news from Baltimore was not far from their minds, either. Earlier Friday, Baltimore State Attorney Marilyn Mosby announced charges against six police officers connected in the death of Freddie Gray. One officer was charged with second-degree murder.
Crystal Richardson, who moved to Philadelphia from Baltimore about 10 months ago, said she was not surprised by the charges. She credited protesters who have demanded changes to the way police treat African-Americans and other minorities.
"There's so much social media," Richardson said. "There's so much awakening today. You can't easily suppress people like they used to."
PHOTO GALLERY: Minimum Wage Rally
Earlier, Richardson addressed about 50 demonstrators at a rally outside a McDonald's at 40th and Walnut streets, urging state lawmakers to raise the minimum wage to $15 per hour. The protesters said such a move — which would more than double the current rate of $7.25 — will help improve workers' standard of living.
The demonstrators then marched south on 40th Street, turned west on Baltimore Avenue and entered Clark Park, where they held a May Day celebration.
The demonstrators mostly kept their message focused on raising the minimum wage, chanting "We can't survive on $7.25," as they marched. But as they approached Clark Park, they shifted their focus to Baltimore, shouting, "All night and all day, we're doing this for Freddie Gray."
Gray's death reignited national outcry over the treatment of African-Americans and other minority groups by law enforcement in the United States. Protests spread throughout the country after riots broke out Monday in Baltimore just hours after Gray's funeral.
In Philadelphia, hundreds of demonstrators rallied outside City Hall on Thursday afternoon, protesting police brutality, racial profiling and black oppression. They then took to the streets, marching throughout Center City for more than four hours. Two people were arrested in demonstrations that mostly remained peaceful.
Several of those protesters appeared at Friday's minimum-wage rally.
"I was surprised because everywhere else, it hasn't led to charges against the cops," said Joe Piette, a member of the Philadelphia Coalition for Racial, Economic and Legal Justice, a grassroots group that organized Thursday's demonstrations.
Yet, Piette was not entirely optimistic, alleging prosecutors often present weak cases against law enforcement officials.
"This is only the first step in a long process," Piette said. "That long process has benefitted the police in case after case after case across the country."
Gray was handcuffed but unrestrained while being transported inside a police van after his April 12 arrest, Mosby said. The officers failed to provide medical attention to Gray, who suffered spinal cord injuries, even though he asked for help on at least two occasions.
The 25-year-old Gray was no longer breathing when he was removed from the van, Mosby said. He died one week later.
"They better get a conviction because the situation is very explosive in this country," said Cheri Honkala, of the Poor People's Economic Human Rights campaign. "Martin Luther King said it best — riots are the voice of the unheard."
Honkala said she has been arrested more than 200 times as part of various civil demonstrations. She said real changes in policing practices will not emanate from the courts or legislatures, but from the people.
"The victory is going to be when people in this country decide they will not be afraid and they will continue to come out in the streets in even larger numbers," Honkala said.
Many questions about Gray's death remain unanswered. But media reports Thursday provided possible accounts of what may have happened.
Multiple law enforcement sources told Baltimore station WJLA that the medical examiner found Gray's neck appeared to have broken when his head slammed into the back of the van. He also suffered a head wound matching a bolt jutting from the vehicle's back door, the sources told the station.
The Washington Post cited a prisoner, who rode in the police van with Gray but could not see him, as saying he heard sounds that suggested Gray tried to hurt himself while riding in the vehicle, according to a document written by a police investigator.
Information from Reuters was used in this report.