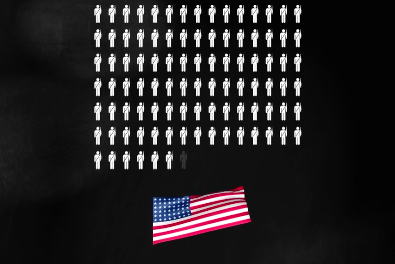 Philadelphia-based developer Neil Halloran put the somber magnitude of World War II's destruction in frightening perspective last Memorial Day with the release of "The Fallen of World War II," an interactive data documentary that visualizes the human cost of the war.

Halloran, a graduate of the University of Pennsylvania, picked up more than 4 million views within a few weeks after posting the project on Vimeo and launching his interactive website.

The Fallen of World War II from Neil Halloran on Vimeo.

Earlier this week, while attending the South by Southwest technology festival in Austin, Halloran's work was honored with the 2016 SXSW Interactive Innovation Award for Visual Media Experience. The award recognizes "content creation and delivery that moves beyond passive viewership by providing a more immersive and engaging entertainment experience."

Fascinated by the response the video, Halloran even broke down the statistics of the first one million views the project received, including social media engagement from several distinguished thought leaders.

Today, "The Fallen of World War II" has more than 7.4 million views on Vimeo.

Halloran, who lived in Austin for about a decade, recently moved back to Mt. Airy and is currently at work on a visual explainer of the U.S. federal budget. The goal of his latest project is to engage citizens in an interactive experience of complex data that will ideally promote democratic participation, transparency and accountability in government. Check out the sneak preview below.