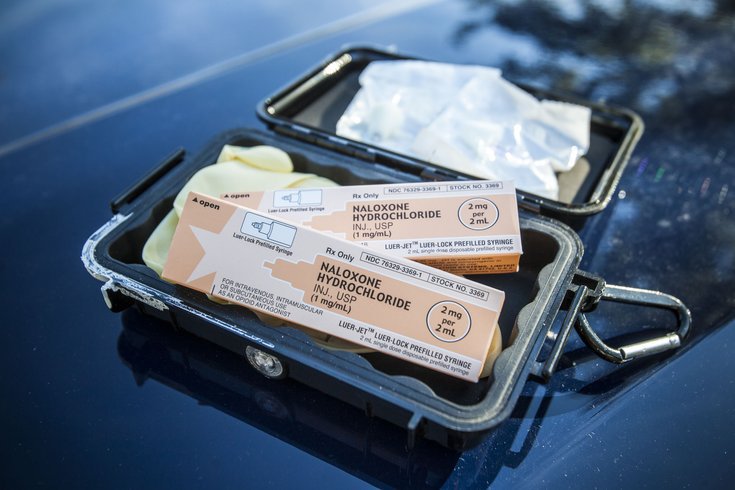 To combat the deadly toll of the opioid epidemic, Philadelphia has installed a new dispenser at the Blackwell West Philadelphia Regional Library, 125 S. 52nd St., that provides free doses of the life-saving overdose reversal drug. Above is a file photo showing boxes of the Narcan

Philadelphia became the first city in the United States to deploy a kiosk that dispenses free kits of the life-saving, overdose-reversal drug Narcan. The new dispenser was installed at the Lucien E. Blackwell West Philadelphia Regional Library, the first of two such machines planned in the city.

The program is part of an overall harm reduction strategy lead by the health department, which is seeking innovative ways to address the crisis of fatal opioid overdoses. In 2020, Philadelphia recorded 1,214 overdose deaths, which included a rise of nearly 30% among Black residents. In the first six months of 2021, there were 582 confirmed overdose deaths, putting the city on track for its deadliest year.

The dispenser kiosks, called Narcan Near Me towers, house 22 small lockers, each containing one overdose prevention kit. Each locker door is opened via a touch screen interface that also enables users to connect directly to 911. Every overdose prevention kit contains two doses of Narcan, gloves, face shields, and a visual aid on how to administer the medication.

The FDA-approved drug, known as naloxone and sold under brand name Narcan, reverses the effects of an overdose by binding to opioid receptors and rapidly halting the effects of drugs such as heroin, morphine and prescription medications like Oxycodone. It also counteracts the effects of the highly potent, synthetic opioid fentanyl, which is responsible for the surge in fatal overdoses in recent years.

"Since 2017, Philadelphia has been fighting rising overdose deaths due to the spread of fentanyl in the heroin being sold in the city," said Health Commissioner Dr. Cheryl Bettigole. "West Philly is one of the places that has been hardest hit by the fact that fentanyl can potentially be in any drug. We need to take action today. We need to make sure that people here in West Philly have free, easy access to Narcan today."

Those who use the dispenser to obtain Narcan will be able to take an optional survey that collects data about the kiosk's users. The towers also provide public health messaging and overdose awareness information.

Both of the first two Narcan Near Me towers will be located in West Philadelphia. The health department plans to expand them to additional sites in Philadelphia in the future.

The towers are made by Canada-based Dispension Industries, which has partnered with the Canadian government to deploy them in areas most impacted by crime and drug overdoses. The dispensers are credited with facilitating 10,000 Narcan pickups since the program's introduction.

The choice of Blackwell Regional Library in West Philadelphia stems from the number of overdoses that have taken place at libraries.

"Within the Library system, there have been over 54 reported incidents concerning overdoses," Kelly Richards, president and director of the Free Library of Philadelphia, said "Free Library staff members account for 41% of the times Narcan was administered. The administration of Narcan has helped many of our community members by reversing the effects of an opioid-related overdose. Having a Narcan Near Me tower outside our library is a special opportunity to provide no-cost Narcan to those experiencing overdoses and help save lives."

"We have lost too many Philadelphians to the overdose crisis," Mayor Jim Kenney added. "That's why we are trying new and novel ideas to help save lives. The Narcan Near Me Towers from Dispension are exactly the type of bold response that we need. With these towers, we can ensure that life-saving naloxone is available 24 hours a day in areas that need it."