Including winners of Geek of the Year, Impact Organization of the Year and many more 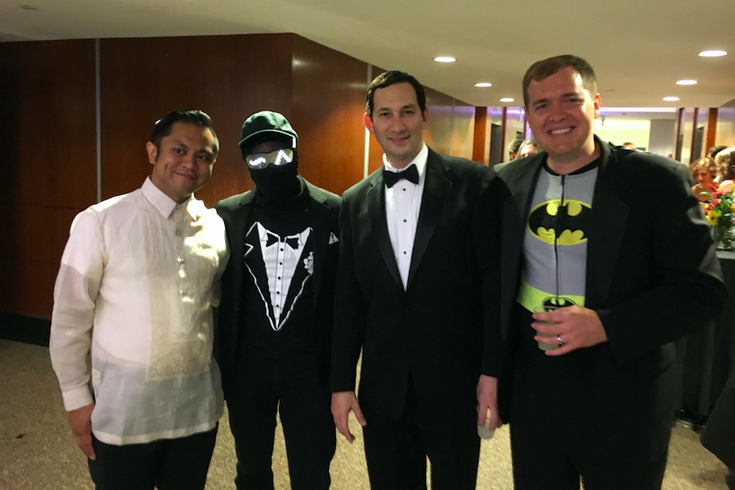 Geeks come in all shapes, sizes, disciplines, genders and colors. That was the consistent message Saturday night at the seventh annual Philly Geek Awards, held at the String Theory School in Center City and presented by Technically Philly, Generocity and Geekadelphia.

“We have a broad definition of ‘geek,’” Mikey Ilagan, editor-in-chief of Geekadelphia and the event’s longtime co-organizer, said Saturday night, applying that word to mean anyone who is passionate about something, especially if that something is particularly outside the mainstream.

“So, many in this room make Philly a better place to work, live and play,” Ilagan said.

The other organizer, Technically Media CEO Christopher Wink, described the Geek Awards as “a full range of what Philadelphia’s geek community looks like, and a huge cross-section of what geek culture is.”

The Geek Awards was nominally a black tie event, but few attendees sported traditional formal wear. Wink, for his part, wore a dark suit over Batman pajamas. There was also a cosplay contest, presented by BillyPenn; there was Wonder Woman, Darth Vader multiple Star Trek uniforms and a couple that showed up in matching Mexican Luchadore masks.

The evening’s aesthetic theme was an ‘80s-inspired vision of futurism, as featured in a “Tron”-like introductory video, put together by area production artist Steve Rivera. But an even more overarching theme of the night was the Philadelphia geek community’s growing diversity, both in the many different kinds of geeks, as well as a great deal of racial, ethnic, and gender diversity. This was reflected both in the attendees of the event, and among the night’s winners. It’s an element that, way too often, has been missing from geek-oriented spaces.

The 2017 Geek Awards, chosen by a selection committee and whittled down from hundreds of applicants, honored everything from the creators of popular films, comics and games, to the scientists and doctors behind major medical breakthroughs to the leaders of hugely impactful social justice movements. Marion Leary, a professor at Penn, advocate for STEM education and co-organizer of the Philadelphia March For Science, was named the 2017 Geek of the Year, in a category in which the nominee slate was entirely female for the second year in a row.

“What an amazing city we live in, where we not only have these incredible organizations that cater to the geek in all of us, but an awards ceremony celebrating all the geeks who make this city why I love Philadelphia,” said Leary, who thanked her wife and daughter.

“It took me a really long time to come into my own and find my geek-ness, and being Geek of the Year in a city I love, chosen by a group of people I admire, makes it all so much better.”

The Black and Brown Workers Collective (BBWC) was named Impact Organization of the Year, for their advocacy on a wide range of issues, from wage disparity to police brutality to sexual harassment. The members gave an impassioned speech that had most of the crowd chanting along with them.

"The BBWC came out of necessity. It came out of wanting to survive," BBWC member Dominique London said from the stage.

"This award we dedicate to our ancestors, whose lives were dedicated to the complete liberation of black and brown folks. To be celebrated by the unpopular idea that we all should be free, I don't just say thank you, I say, it's about damned time." 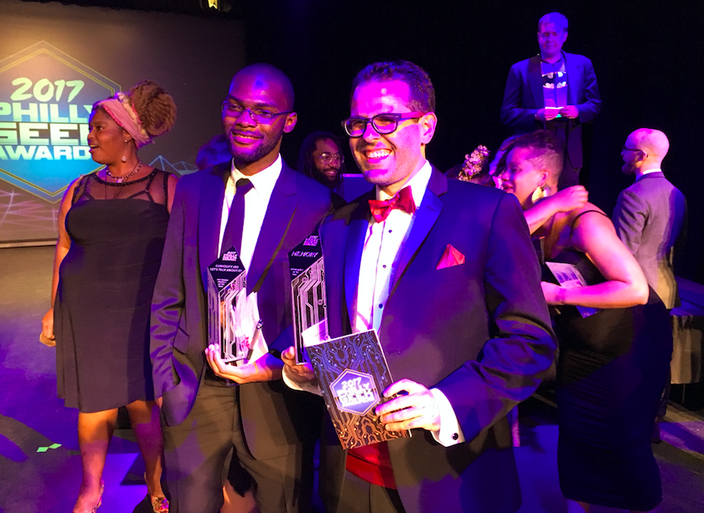 Nicodemus Madehdou and Tom Dixon, winners of Multimedia Project of the Year

Several of those activists took the stage again not long after, when the Battling Racism in the Gayborhood organization won for Movement of the Year, and local journalist Ernest Owens, of Philadelphia Magazine and the G Philly blog, gave a speech of his own about that endeavor. The other two-time winner on the night was the young developer Nicodemus Madehdou, CEO and founder of Jumpbutton Studios. Jumpbutton won Multimedia Project of the Year, for its series of animated shorts called “Curiosity 180: Let’’s Talk About It!, an award that Madehdou dedicated to a friend and collaborator who recently passed away. Jumpbutton also won Dev Product of the Year for Me.Mory, a project in which Jumpbutton helped a man named Tom Dixon develop an app-based solution for memory loss, after he suffered a traumatic brain injury.

Christine Larsen, who took home Comic Creator of the Year for her work for Dark Horse, DC Online and Cartoon Network, as well as her own The Larsen Project.

Peter English and Jeff Gregorio won the Maker of the Year award for Drumhenge, a new musical instrument comprised of 16 drums, all played by electromagnetic vibrations. The project is featured at Drexel University’s ExCITe Center.

The winner for Feature Length Indie Film of the Year was director Ted Fendt’s “Short Stay,” a 61-minute film about a New Jersey pizza deliveryman who sublets an apartment in Philadelphia.

The Scientist of the Year award went to Dr. Alan W. Flake of CHOP, who is leading the hospital’s effort to develop an artificial womb, known as the Biobag, which is meant to extend the gestational period of premature babies.

Simon Hauger, a math and science teacher at West Philadelphia High School, won Mission Leader of the Year. He founded that school’s Hybrid X team, who encouraged the STEM interests of his students by mentoring their creation of hybrid vehicles.

Clarifi and RISE won Partnership of the Year. Clarifi is a financial wellness nonprofit organization, while RISE is a city-run agency meant to provide support for previously incarcerated individuals. The two partnered on a series of workshops as well as individual counseling. 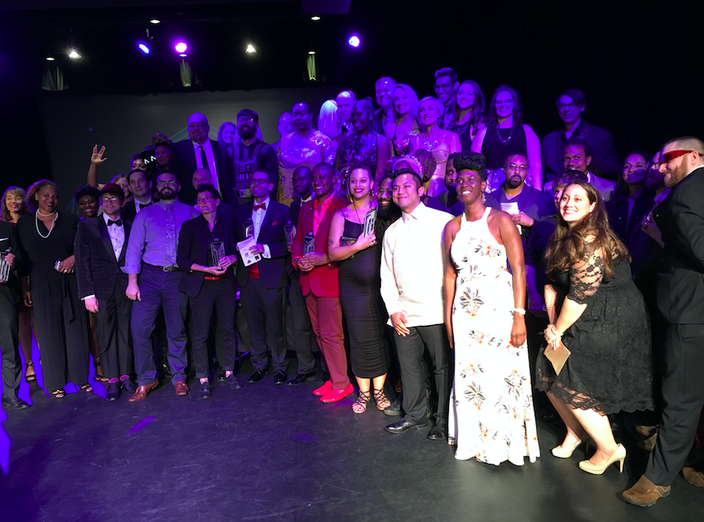 The Awards' winners and presenters.

The Startup of the Year is Keriton, an effort to track and manage breast milk for premature babies in hospital NICUs. The effort, founded by Penn grad Vidur Bhatnagar, uses a suite of apps. It was developed in DreamIt Health’s 2016 accelerator.

Dr. Basil Harris, an ER doctor, was named Technologist of the Year, after he developed a tricorder-like diagnostic device. The device, which Harris has said was inspired by Star Trek technology, previously won a $2.6 million prize from the Qualcomm Tricorder XPrize competition. Dr. Harris was unable to attend the Geek Awards, as he was working an ER shift on Saturday night.

“Lazer Ryderz!,” a 1980s-inspired tabletop game from husband-and-wife designers Anthony Amato and Nicole Kline, was named Game of the Year. The Kickstarter-funded game comes in a box that resembles VHS tapes.

The other change was that the event was held, for the first time, at the String Theory School, a four-year-old charter school at 16th and Vine streets, in the building that formerly served as GlaxoSmithKline’s headquarters. The school, which recently graduated its first high school class, also operates an associated startup incubator in the same building.

Wink said afterwards that while the ceremony very nearly didn’t take place in 2016, several attendees told him that this year’s event was “one of, if not the best” Geek Awards nights. He expressed gratitude that “the resiliency of this community continues to expand. It's a wonderful intersection of passionate subcommunities.”

“The Philly Geek Awards has always aimed to be the most welcoming celebration of what being a geek in Philadelphia means,” he said.

“Saturday night just might be the best example so far.”