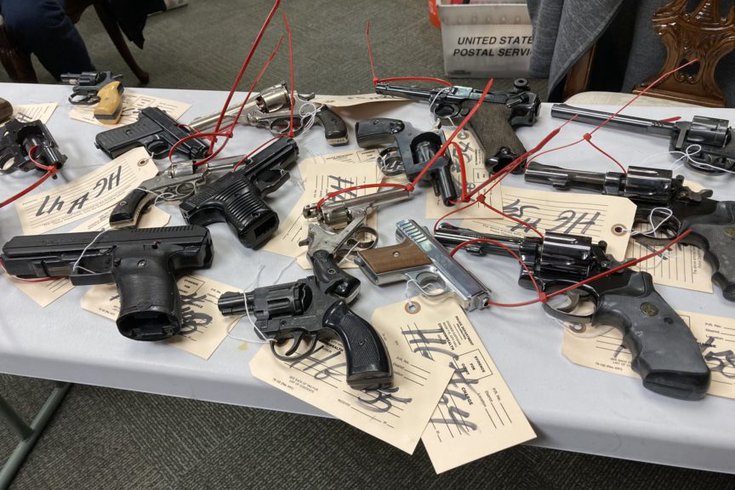 Philadelphia City Council partnered with the Fathers Day Rally Committee, the Greenfield Foundation, Brown's ShopRite, and two local churches to take 224 guns off the street during a buy back event last weekend.

As Philadelphia searches for strategies to contain an epidemic of gun violence, the city successfully took possession of 224 guns returned last weekend through an incentive program at two local churches.

Whereas past gun "turn in" events were voluntary in nature, the organizers of Saturday's event offered $100 gift cards for groceries at local ShopRite stores.

More than 100 guns had been turned in by noon, quickly exhausting the supply of gift cards until Brown's, led by Philadelphia grocer Jeff Brown, provided additional gift cards.

"There’s a difference between just asking people to turn in guns — and we did that last year – and offering them an incentive, and it shows that this works," said Bilal Qayyum, president of the Fathers Day Rally Committee.

"People were able to put food on the table," Bass said. "We know that because of COVID-19, people are really struggling, so this goes a long way."

Philadelphia recorded a near-record 499 homicides in 2020, an increase of about 40% over the previous year. More than 2,200 people were injured in shooting incidents. An alarming number of young children and teenagers have been victims of these shootings.

Philadelphia police say guns left in houses often wind up getting stolen and are later found to have been used in violent crimes. The department praised the initiative and thanked city council and the event organizers for their involvement in the event.

"224 guns are now off the streets of Philadelphia thanks to concerned citizens who said by their actions this weekend that they are sick and tired of the gun violence plaguing our city and wanted to play a role in making Philadelphia safer," City Councilmember Kenyatta Johnson said. "Gun buybacks are just a part of an overall long-term strategy to reduce the crime and murder rate in Philadelphia."